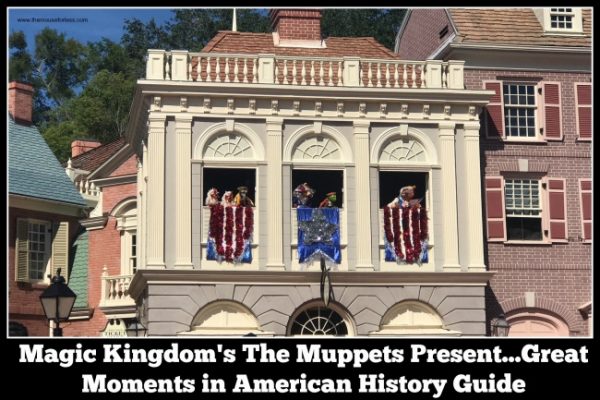 Hear ye! Hear ye! Come to Liberty Square, and watch the Muppets tell the stories of the Declaration of Independence and Paul Revere’s ride as only the Muppets can during The Muppets Present…Great Moments in American History.

Shopping: Near Great Moments in American History, guests can sit for silhouette drawings or portraits at “Liberty Square Portrait Gallery.”

Dining/Refreshment: Several restaurants are situated near Great Moments in American History in Liberty Square. Guests can enjoy a quick service breakfast, lunch, or dinner at Sleepy Hollow, where funnel cakes and waffle sandwiches dominate the menu. Additionally, the quick service Columbia Harbour House restaurant offers seafood at lunch and dinner, while guests preferring a sit-down meal can eat lunch or dinner at Liberty Tree Tavern. This restaurant, which is themed after a tavern that one might find in Colonial Williamsburg, serves pot roast, fish and chips, cheeseburgers, salads, and pasta at lunch; and an all-you-care-to-eat family style platter of Thanksgiving favorites, such as turkey, pork, pot roast, mashed potatoes, stuffing, and macaroni and cheese, at dinner.

Restroom: No facilities are available in Liberty Square, but Tangled-themed restrooms are located at the Fantasyland border.