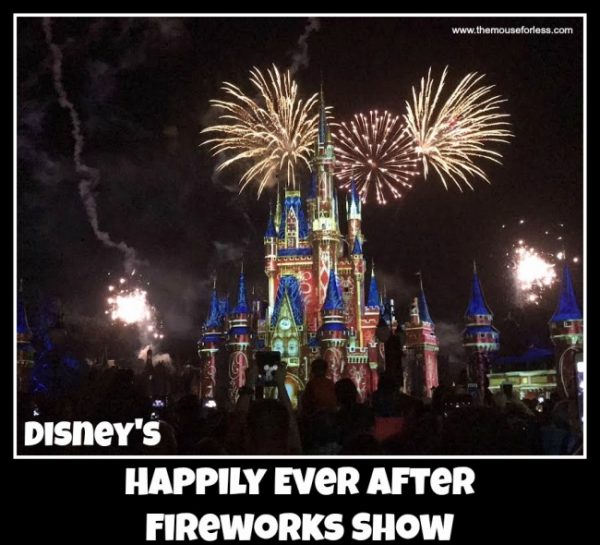 Happily Ever After is the newest fireworks spectacular at the Magic Kingdom. This show replaced Wishes, and made its debut on Friday night, May 12, 2017.

Happily Ever After will return on April 3, 2023. It will replace Disney Enchantment.

Happily Ever After is a nighttime spectacular centered around Cinderella Castle on Main Street USA. This show features fireworks, lasers, and the latest in projection mapping technology. Projections and lasers help to tell a story on the face of Cinderella Castle, turning it into a giant, beautiful screen. These projections are animations created by some of the same animators who make the beautiful Disney movies we know and love. The show also features a musical score with contemporary versions of popular Disney songs, and a brand new song created just for Happily Ever After. On top of all of this, are the unforgettable fireworks that light up the night sky! Happily Ever After closes out the day at the Magic Kingdom along with other nighttime entertainment like the Once Upon A Time projection show. Be sure to experience these performances on your visit to the Magic Kingdom.

Check MyDisneyExperience or a times guide for daily showtimes.

Movies featured in Happily Ever After include:

The Hunchback of Notre Dame

The Princess and the Frog

Locations outside of Magic Kingdom

Happily Ever After Fun Facts