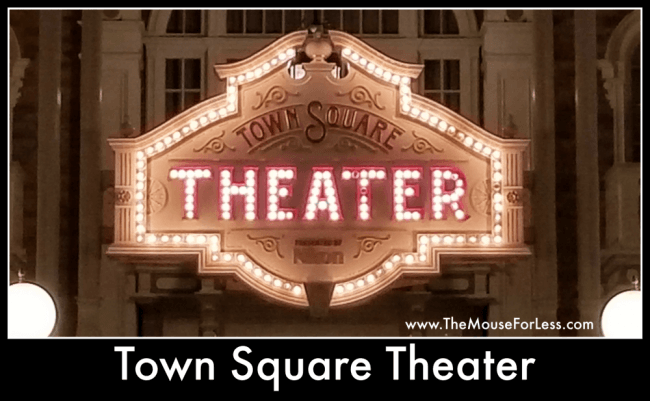 At Town Square Theater, guests can meet Mickey and Minnie Mouse as well as the illuminating fairy Tinker Bell from Peter Pan (1953) at this character greeting location.

Duration of Ride: About 3 minutes of character interaction

Typical Queue Time: About 1 hour to 90 minutes for Mickey; about 30 minutes to 1 hour for Tinker Bell

This attraction is located on the Magic Kingdom’s Main Street U.S.A.

Dining/Refreshment: Guests can enjoy a casual Italian lunch or dinner at the adjacent Tony’s Town Square Restaurant, and assorted snacks are sold at the adjacent Main Street Confectionery.
Guests can dine with Mickey for breakfast and dinner at the Contemporary Resort’s Chef Mickey’s buffet restaurant; for breakfast, lunch, and dinner at Epcot’s Garden Grill Restaurant; and for dinner at Disney’s Hollywood Studios’ Hollywood and Vine buffet.