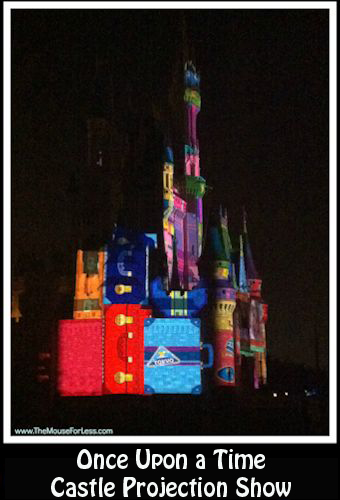 The Once Upon a Time castle projection show features many favorite Disney movie characters. The show is hosted by Mrs. Potts and her son Chip. Mrs. Potts tells Chip a  lovely bedtime story and magic ensues. The story features scenes from Pinocchio, Aladdin, Peter Pan, and Cinderella. The blockbuster movie Frozen is, of course, featured with a stirring rendition of “Let it Go.” In addition there are scenes from Alice in Wonderland and Winnie the Pooh. Since the story is told by Mrs. Potts, much of the finale of the show is dedicated to Beauty and the Beast, and it is really lovely.

This nighttime show can be viewed from anywhere on Main Street USA in front of Cinderella Castle. This charming show, which lasts approximately 14 minutes, will likely be enjoyed by the majority of guests to the park.