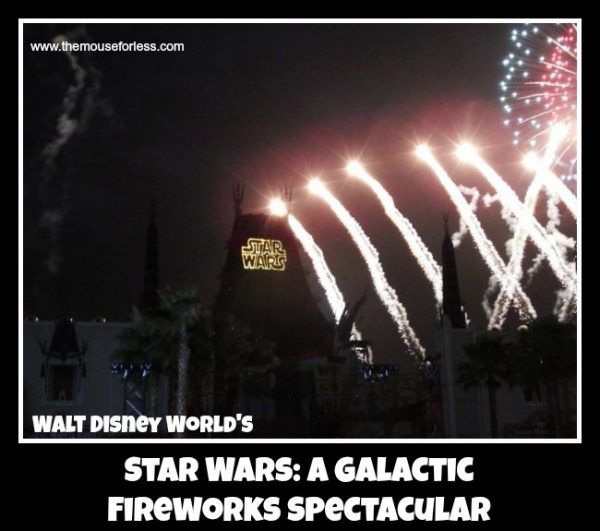 The Star Wars: A Galactic Spectacular show is a combination projection and fireworks show at the Chinese Theater in Disney’s Hollywood Studios.  The show includes Star Wars characters from the first 6 movies of the epic saga, including Yoda, Luke, Leia, and Darth Vader, along with characters from the Force Awakens, including Rey, Poe, Finn, and Kylo Ren. Fireworks are synced to John Williams’ memorable Star Wars soundtracks. Star Wars: A Galactic Spectacular also features lasers and dramatic fire effects. The lasers help to make the crowd feel as if they are in the action of a Star Wars battle, and the fire effects are large enough to warm the faces of the crowd. These are impressive effects, but small children may be scared by parts of the show.

Overall, the show allows guests to relive some of the most memorable scenes of the Star Wars movies in an explosive and amazing nighttime spectacular.  This show is performed most nights, check the MyDisneyExperience app or a times guide for more information.

Here’s a full video of Star Wars: A Galactic Spectacular:

There is also an option to attend the Galactic Spectacular Dessert Party for a reserved viewing location. Guests who choose to attend this dessert party will experience out of this world treats and a special location for viewing the unique Star Wars themed nightly show. With the Star Wars: Galactic Spectacular Dessert Party, guests sample Star Wars-inspired desserts and select alcoholic and non alcoholic beverages, all accompanied with a premium viewing experience for a dazzling show of fireworks, lights, and projected scenes from the films.