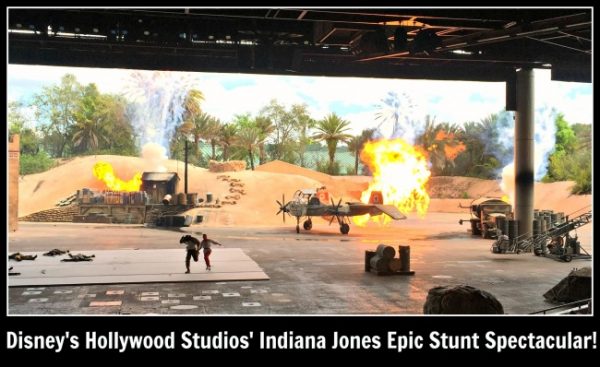 Experience the action of Raiders of the Lost Ark (1981) at the Indiana Jones Epic Stunt Spectacular!

Duration of Ride: About 30 minutes

Typical Queue Time: None; performances start at scheduled times during the day

Attraction Open During EMH: No. See our Extra Magic Hours page for attractions open during EMH.

Dining/Refreshment: A plethora of restaurants can be found near the Indiana Jones Epic Stunt Spectacular! Breakfast, lunch, and dinner are served buffet style at Hollywood & Vine; the former two meals feature characters, such as Princess Sofia the First and Doc McStuffins, from the Disney Channel’s “Disney Jr.”, while dinner includes appearances from Minnie Mouse and other classic Disney characters. Meanwhile,50’s Prime Time Café serves home-style dishes, such as chicken pot pie, fried chicken, and meatloaf, and milkshakes; this restaurant is known for the servers “playacting” with diners, so inform him or her if you would rather dine regularly. Guests preferring a counter service meal can enjoy burgers, hot dogs, and chicken and waffles at Backlot Express; and hot dogs and sausage at Min & Bill’s Dockside Diner.