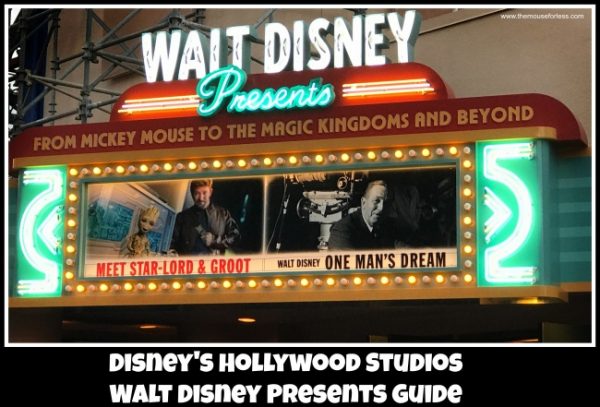 At Walt Disney Presents, guests can immerse themselves in both the life of the man behind the magic, Walt Disney, and the projects of the modern Walt Disney Company at this self-guided museum attraction.

Dining/Refreshment: Two table service restaurants, The Hollywood Brown Derby and the Sci-Fi Dine-In Theater Restaurant, are located in close proximity to Walt Disney Presents. The former establishment offers a variety of upscale dishes, including a massive Cobb Salad, filet of beef, pork chops, duck, grouper, and salmon, in a classic Hollywood setting; while the latter restaurant serves a plethora of sandwiches and specialty beverages in a room themed to a drive-in movie theater; most tables at Sci-Fi Dine-In Theater are cars, and clips from classic science-fiction movies are screened.