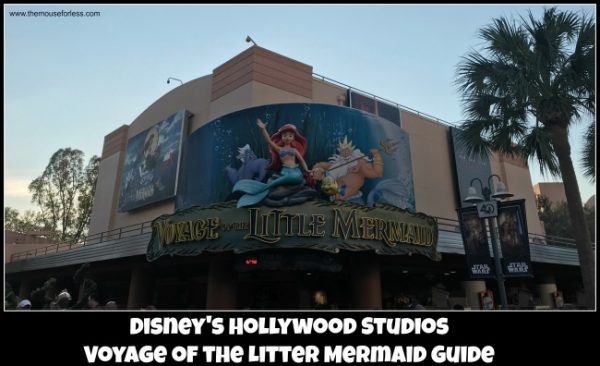 Duration of Ride: About 17 minutes

Dining/Refreshment: Near Voyage of the Little Mermaid, guests can enjoy a table service lunch or dinner in a classic Hollywood setting at The Hollywood Brown Derby. This restaurant’s upscale menu includes a Cobb Salad, beef, lamb, duck, pho, pork chops, and grouper. Drinks and small dishes can also be ordered at the adjacent Hollywood Brown Derby Lounge.
Guests wanting to dine with The Little Mermaid, Ariel, should consider making ADRs for breakfast, lunch, or dinner at the Magic Kingdom’s Cinderella’s Royal Table or Epcot’s Akershus Royal Banquet Hall, or for breakfast at the Boardwalk Inn’s Trattoria al Forno, where Prince Eric also usually appears. Be aware that Ariel is not guaranteed to appear at any of these meals, though some assortment of Disney princesses is always present.

Restroom: Facilities are situated near the Hyperion Theater.

Top 5 Tips for Voyage of the Little Mermaid