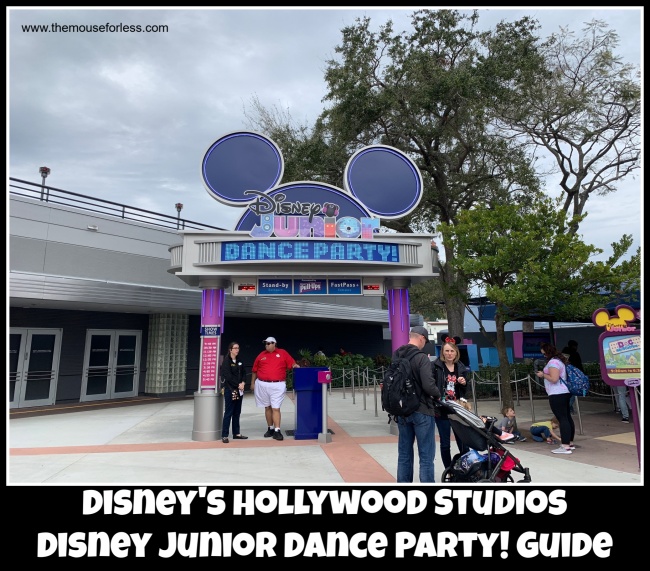 At Disney Junior Dance Party!, children visiting Disney’s Hollywood Studios will have a blast at this experience where they can show off their moves, catch bubbles and more at a fun-filled party featuring favorite Disney Junior Characters and music.

DJ Deejay will get the celebration started and Host Finn Fiesta welcomes Disney Junior pals to this star-studded event. The party will be joined Doc McStuffins, who will cure your dance fever during a fun-filled musical number. Next, “Zuka Zama Zum Zum” alongside Timon from The Lion Guard. And get down and boo-gie with everyone’s favorite vampire girl, Vampirina. At the end of the experience, Mickey Mouse from Mickey and the Roadster Racers will have you awaiting his arrival. Can he make it in time to be part of the festivities?

Duration of Ride: About 25 minutes

Shopping: Assorted costumes and other goods based on The Little Mermaid (1989) can be purchased next to Disney Junior Dance Party! at “In Character.”

Dining/Refreshment: If your children are fans of Disney Junior, consider enjoying a breakfast buffet at Disney’s Hollywood Studios’ Hollywood and Vine Restaurant; characters from shows such as Doc McStuffins, Fancy Nancy, Racer Goofy and Vampirina appear daily during breakfast; Advance Dining Reservations are strongly recommended.
Also, near Disney Junior Dance Party!, guests can enjoy a table service lunch or dinner in a classic Hollywood setting at The Hollywood Brown Derby.

Restroom: Restrooms are located near the Hyperion Theater.