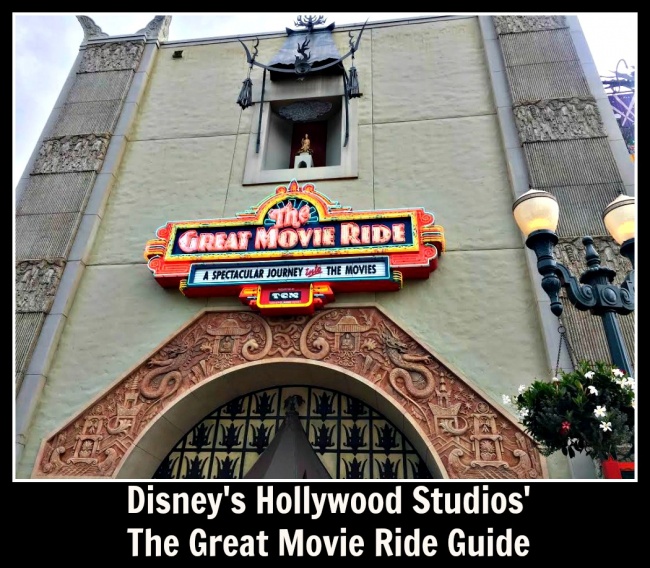 Become part of classic movie scenes on this Disney’s Hollywood Studios mainstay, The Great Movie Ride is located in an iconic replica of TCL Chinese Theatre.

On July 15, 2017, Disney announced that The Great Movie Ride would be closing. The attraction permanently closed on August 13, 2017 to prepare for a new attraction, “Mickey and Minnie’s Runaway Railway.”

Duration of Ride: About 20 minutes

Shopping: Assorted goods and souvenirs can be purchased among the various shops, including “Mickey’s of Hollywood” and “Keystone Clothiers,” along Hollywood Boulevard.

Dining/Refreshment: Across the courtyard from The Great Movie Ride, lunch and dinner are served in an upscale, old time Hollywood setting at Hollywood Brown Derby. The house specialties at Hollywood Brown Derby are the Cobb Salad and the Grapefruit Cake, the latter made with yellow cake and grapefruit icing. Other options on the expansive menu include crab cakes, pork tenderloin, salmon, lamb, beef, and a noodle bowl.

Restroom: Facilities convenient to The Great Movie Ride are located at the adjacent Hyperion Theater.

Mickey and Donald Duck can be seen among hieroglyphics in the Raiders of the Lost Ark room.
Sponsored Ad: Learn more about Hidden Mickey details and location throughout Walt Disney World in A Field Guide to Walt Disney World’s Best Kept Secrets