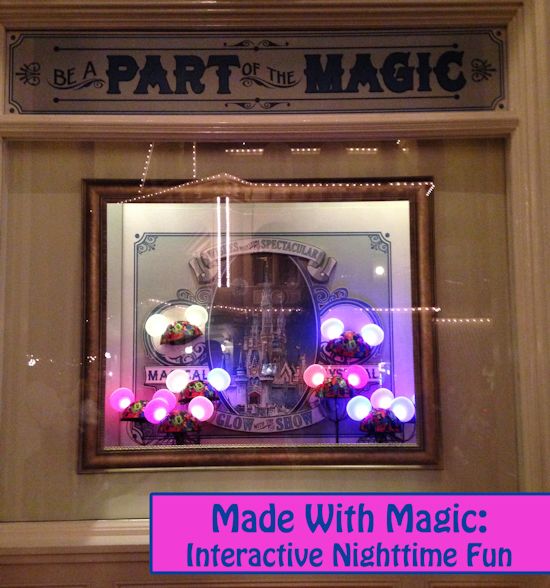 Walt Disney World is the most magical place on Earth, and now you can glow with the show. Guests can now become a part of the show, with the “Made With Magic” interactive nighttime show merchandise. There are 4 different “Made with Magic” items to choose from. Made with Magic items can be purchased at several locations at the Walt Disney World Resort and these items will interact with many of the different shows around Walt Disney World and Disneyland. Guests can watch in wonder as these technologically advanced products have been programmed to change color and blink in time to the music.

“Made with Magic” items currently work with many of Disney’s nighttime extravaganzas.

“Made With Magic” Products

3.0 Connected Ear Hat
Disney’s newest hat in the shape of Mickey Mouse’s ears can connect through Bluetooth to your phone and be controlled by the Disney app (color remote). The color remote allows you to change the colors of the ears and the strobe speed. When you watch some of the shows at Disney the colors and strobe speed will sync with the music and colors of the show itself!

Sorcerer Mickey Wand
With Mickey’s sorcerer wand you will be able to do great things! When you wave this wand at your other made with magic items you can change the colors just like Sorcerer Mickey.

Rivers of Light Totem Glow Wand
These wands are inspired by Rivers of Light by Animal Kingdom and comes with 4 different animals on them that will light up to the sequence of select shows at Walt Disney World. The Totem Glow Wands can also control your other made with magic items as well.

Made with Magic Show Locations

At Walt Disney World, the products work at all four theme parks.

Made with Magic Purchase Locations

TheMouseForLess Made with Magic Tips

You can bring items back with you time and time again, and they will work!

The products use AAA batteries, so when they do eventually run out of juice, you can easily replace the batteries.

Bought a “Made with Magic” item at Disneyland, or vice versa? Good news!  They will work on both coasts!

The “Made with Magic Ear Hat 3.0: Connected” will work at home! All you have to do is download the Shop Disney Parks app, put on your 3.0 glowing ears, and turn on the TV. During select performances and television specials, you can “Glow at Home” along with the show! The Bluetooth technology allows viewers at home to interact with their TV, while the app lets users sync with the audio from the special interactive Made with Magic.