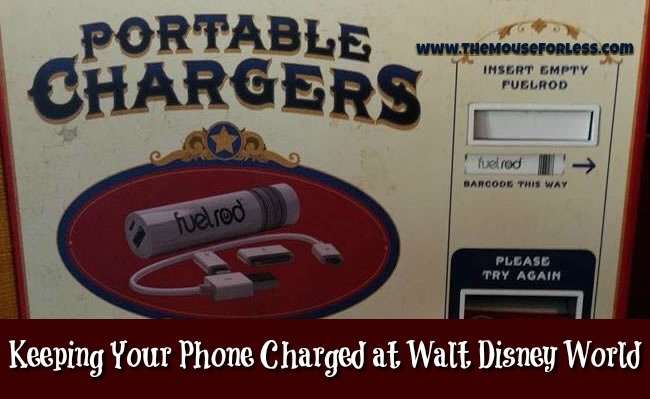 It seems like a necessity to have your phone charged and ready to go all the time. This is especially true while at Walt Disney World in case you get separated from your group or need to update a dining or Genie+ reservation on the MyDisneyExperience app. You can charge your phone at any empty and easily accessible plug-in, but please remember not to go into Cast Member only areas and do not unplug anything that is already plugged in at an outlet that you find.

Here are some tips on extending the battery charge of your phone:

If conserving energy for your phone isn’t enough, we have found a number of places and methods at Walt Disney World to keep your phone charged.  At most restaurants in the parks, outlets can be found along the walls. In addition, there are multiple locations where guests can find convenient stations to take a break and plug in their cell phones.

FuelRod: FuelRod is a portable battery that you can purchase in the parks for $30.00. This is a one time fee, and after you use the charge on the FuelRod, you can exchange it for a freshly charged FuelRod. There is a $3.00 charge for exchanging your used FuelRod for a freshly charged one in the parks. This FuelRod package comes with a six inch USB chord that has adapters for Androids and iPhones (both30 pin and lightning). These chargers can add up to eight hours of charge to your phones. Once purchased, the FuelRod chargers are for the you to keep; guests get to take the charger home with them.

First aid and Baby Centers: there are available outlets.

Because Animal Kingdom is a park that celebrates nature and the outdoors, there are fewer locations for charging electronic devices in this park. Look in and around buildings and restaurants to find places to restore that phone battery. Don’t forget that you can always take your phone to Guest Relations to be charged.