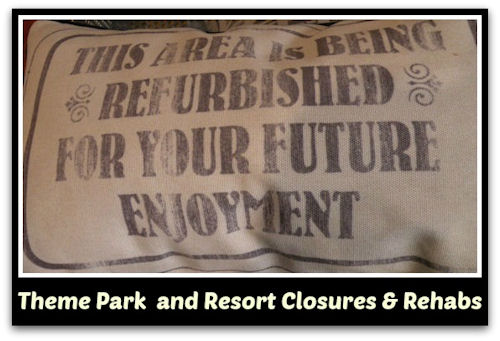 Not all Walt Disney World Theme Park and Resort Closures and Rehabs listed will appear on Disney’s official rehab calendar. For updated information on attraction closings, call 407-W-DISNEY (934-7639) just before your scheduled visit. Schedules below are meant as an informative rather than official guide and are gathered from several official and unofficial sources.

** All information is subject to change.**

Planning a Walt Disney World Vacation?
For a Free no-obligation quote, contact our sponsor The Magic For Less Travel. The Magic For Less Travel is an Authorized Disney Vacation Planner and has been helping guests plan magical vacations since 2002. Receive the best prices and free travel planning services. Their fee-free services will help you save time, money, and stress while planning a vacation designed around you and your needs!
Request Your Free Quote Today!

Dates Announced for the EPCOT Festival of the Arts for 2022