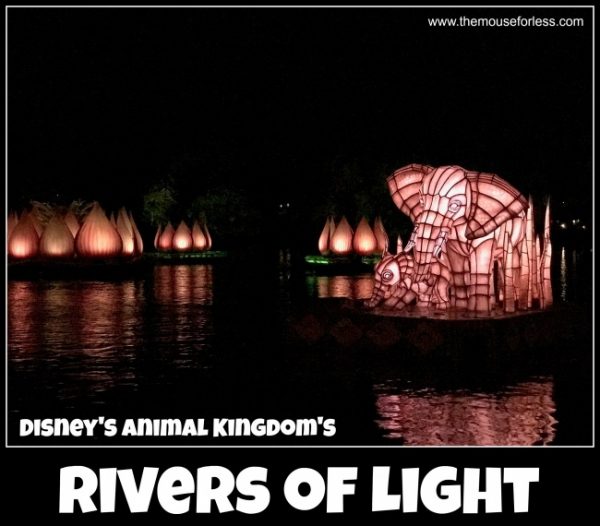 As of July 2020, Rivers of Light has been permanently closed.

Prior to the show, the areas around the theater come alive with projections and sound effects that set the mood for the event. Rivers of Light is meant to celebrate the wildlife of the world, and it begins with these subtle effects that set the stage for the rest of the show. The show takes place at Disney’s Animal Kingdom.

A brand new version of the show debuted on May 24, 2019 called Rivers of Light – We Are One. Rivers of Light lasts about 18 minutes. The show features self-guided floating barges, huge fountains, colored lights, projections, and fire effects. During Rivers of Light, the show begins with a vibrant awakening of flitting fireflies leading to a procession across the water. From there, clusters of lantern light shift into animal spirit forms—the Tiger, Turtle, Elephant and Owl. There are also now character motifs included in the water screens and on the sails of the boats. All of this unfolds to a dramatic and memorable musical score, which is mixed with favorite Disney music.

The technology used for this show is pretty impressive, with moving fountains on the water combined with the latest in projection technology. Some of the projections are vivid, but the wind does occasionally affect the large water screen projections. The show has mixed reviews, but overall is a nice conclusion to a day spent with the wildlife of Animal Kingdom.

Rivers of Light can be best viewed from the stadium-style seating located on the Discovery River between Asia and DinoLand. The show could also be seen from select areas in Asia where the inside of the amphitheater can be seen. These secondary viewing areas would not be ideal for seeing the show. Another place to view the show is Flame Tree Barbecue, but it is also not an ideal viewing location. While you can see the lake, the restaurant is actually behind the projections so you may miss part of the story.

Stand-by guests are typically seated in the theater 30-45 minutes ahead of showtime. Once seated, guests are permitted to leave and re-enter the theater to get snacks or for bathroom breaks.

The seating for Rivers of Light is typical bench stadium seats. If you would like to be comfortable while waiting for the show, we recommend bringing a stadium cushion or the like to make the benches more comfortable.

There is also a Rivers of Light Dining Package available. When making a dining reservation in Animal Kingdom, you can check for the availability of this package, which will ensure seating at the show. This is a recommended way to view the show.

The show schedule for Rivers of Light varies. It may not be presented every night, but many times the show is often presented twice when it is performed. Check a Times Guide or the My Disney Experience App for more information. If there are two performances, the second performance is typically less crowded.

The amphitheater for viewing Rivers of Light is handicap accessible, however guests may be asked to transfer in order to obtain a better view of the show. Handicap viewing can be found in the back of the amphitheater, near the standing room only viewing locations.

Typical Queue Time: None; shows are held at scheduled times each evening