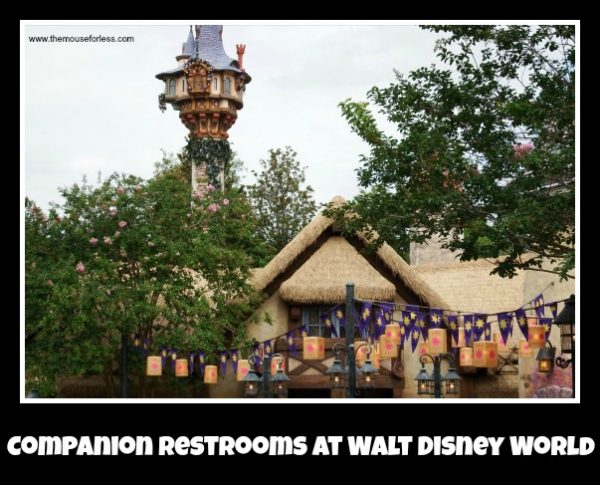 Most of the public restrooms around the Walt Disney World theme parks and resorts have at least one wheelchair accessible stall and sink. The restrooms are typically fairly large and accommodating to those with mobility limitations or other needs. However, in some cases, a companion restroom provides just a bit more privacy and space for mobility.

A companion restroom is a single room with a toilet and sink that provides greater privacy and space for taking care of someone who has limited mobility or needs assistance. The companion restrooms at Walt Disney World are non gender specific to accommodate individuals with caregivers of the opposite sex.

If you are looking for companion restrooms at Walt Disney World while in the parks check the MyDisneyExperience app for a map with the nearest restroom facilities or just ask a Cast Member.

Companion restrooms at Walt Disney World are located at all First Aid Centers in addition to the following locations.

If you have a service animal, there are also locations for their needs around the Walt Disney World Resort as well. Click here for information about Service Animal Rest Areas.