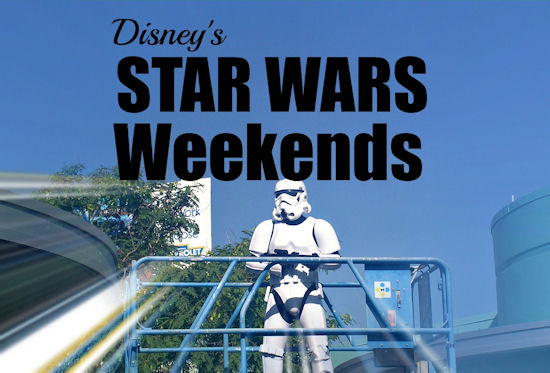 Star Wars Weekends has been cancelled for 2016 and for the foreseeable future. No word on if the event will ever return. For those who are curious about what this event entailed, here is a look at what occurred during the 2015 event.

From the special “welcome” Guests receive at the park entrance from the stormtroopers and Star Wars trivia contests to Jedi Training Academy, Star Wars Weekends will have more fun than you can shake a gaffi stick at. Join Jedi, Sith, Ewoks, Wookiees, galactic bounty hunters and stormtroopers for the park’s annual celebration of all-things-Star Wars.

At Star Wars Weekends, you can “Meet-and-Greet” with famous villains and heroes from the entire Star Wars saga. Never let your guard down though, guests never know which Star Wars character they’ll find around the corner! Coming face to face with an armed Storm Trooper is not uncommon! Guests can also experience one of the largest Star Wars parades in the world during the day.

Jedi Training Academy, one of the interactive entertainment experiences at the theme park, is expanded during the event and allows young guests to learn from a Jedi Master before testing their newly acquired skills in a battle with Darth Vader or Darth Maul. Also featured: the chance for fans to purchase one-of-a-kind and limited edition Star Wars memorabilia, Star Wars trivia and star conversations with Star Wars celebrities.

The event runs for 5 consecutive weekends (Friday, Saturday and Sunday) in May and June at Disney’s Hollywood Studios. Each weekend, different Star Wars celebrities are special guests and take part in meet-and-greets, interviews and Hollywood-style motorcades. Over 50 Star Wars characters from the entire saga will be featured.

Read About Star Wars Weekends on our Blog

From May 4 – June 14, 2015, Star Wars Character Meals will be featured every day of the week. Sci-Fi Dine-In Theater will feature a galactic breakfast experience, while guests can enjoy a Star Wars character dinner and Fantasmic! package at the Hollywood & Vine restaurant. Don’t delay! These special meals are sure to sell out quickly. A credit card guarantee is required at time of booking. The usual 24 hour cancellation policy with a $10 penalty per person applies. To book, call 407-WDW-DINE or visit www.DisneyWorld.com.

A Star Wars themed poster will be distributed to Annual Passholders and Disney Vacation Club Members each day of Star Wars Weekends. DVC members should go to any DVC location throughout the park. Annual Passholders should go to the area between One Man’s Dream and Toy Story Mania! and show the Cast Member their annual pass or MagicBand with the “annual passholder” slider. Between 4 p.m. and 7:30 p.m., poster distribution will be at the Information Desk at ABC Sound Studio for both DVC and AP holders. 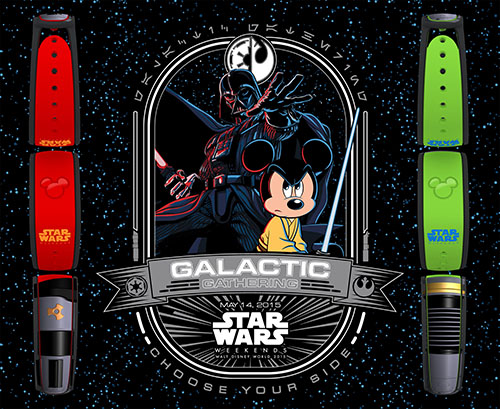 Beginning on March 4, 2015, guests can begin registering for the all-new Galactic Gathering. The Galactic Gathering will be held only on Thursday, May 14, 2015 between 10 a.m. and 3 p.m. at Disney’s Hollywood Studios. Tickets are $250 per person, and theme park admission is required (but not included).

Register at www.DisneyParksMerchandise.com for this exclusive event. No discounted tickets will be offered.

Some celebrities this weekend will attend and participate in autograph sessions in a new location on Commissary Lane near Star Tours.

Schedules subject to change without notice. 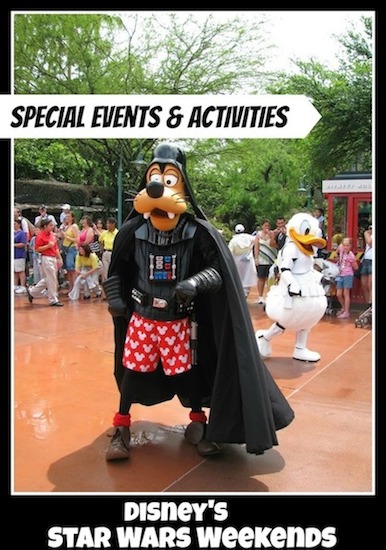 Hollywood Studios hours are from 8/9 a.m. to 10/11 p.m. on Star Wars Weekend dates. However, turnstiles usually begin admitting guests into the park between 7:15 a.m. and 7:30 a.m. Those wishing celebrity autographs should use the bag check line to the far right.

Characters
Encounter over 60 Star Wars characters from the entire saga – and a few new ones. From Darth Vader and Darth Maul to Anakin and Chewbacca, you’ll find some of your favorite heroes and villains from a galaxy far, far away. Characters appear between 8 a.m. and 7:30 p.m.
Stormtrooper Welcome – 7:30 a.m. on Hollywood Blvd

Legends of the Force Parade
Autograph opportunities are not the only place to see the celebrities. Star Wars stars also take part in the gala “Legends of the Force” parade. The motorcade begins at the front of the park and travels to the Hollywood Boulevard Stage, concluding with a grand celebrity welcome. The ultimate themed motorcade takes place at 11:00 a.m. each day of Star Wars Weekends.

Jedi Training Academy
Jedi hopefuls learn the ways of the Force before coming face to face with Darth Vader to test their skills with a lightsaber. Child must be between the ages of 4 and 12 to participate. Sign up in front of Indiana Jones Epic Theater at park opening to secure your spot. Both parent (or adult over 18) and child must be present when signing up. Sign up immediately at park opening as spots go fast. Twelve guests will be selected for each show. Availability is limited and on a first-come, first-“sabered” basis. During Star Wars Weekends, additional characters may take part in this experience.

Padawan Mind Challenge
The Padawan Mind Challenge is held on Center Stage. The kids edition, which features Ezra and Sabine, is held at 12:15 p.m. and 4:15 p.m. To sign-up children ages and 11 and younger, go to ABC Sound Studio at park opening. A family edition, hosted by Ashley Eckstein, is held at 2:30 p.m. and 6:00 p.m. Sign-ups are not required for the family edition.

Star Tours: The Adventures Continue
Experience droids, Starspeeders and out-of-this-world destinations, all in 3D, at Disney’s Star Tours attraction. This attraction takes guests through one of 54 possible sequences – and you never know which journey you’ll get!

Intergalactic Dance Party
DJ Lobot will be playing your favorite dance tunes for the intergalactic dance party beginning at 7:00 p.m. at Center Stage.

Symphony in the Stars
Don’t miss the interstellar fireworks at 9:45 p.m. The celebration features a few of your favorite Star Wars characters and an amazing fireworks display.

Celebrity Talk Shows
Experience the fascinating life and movie making adventures of visiting celebrities at Theater of the Stars (Beauty and the Beast–Live location).

Photo and Autograph Opportunities
Snap a pic’ of your favorite Star War characters and celebrities each weekend during the month-long event or have a memento signed by Star Wars celebrities! As always, there is no additional charge for the celebrity autograph sessions at Star Wars Weekends.

Special Star Wars Merchandise
Blast into Star Wars Weekends 2015 with limited edition pins, artwork and collectibles for the entire family! Plus, there are always special opportunities for artist signings and book signings.

Darth’s Mall offers guests the opportunity to purchase a variety of Star Wars merchandise and event logo items. There are three different locations oof of Streets of America. Darth’s Mall opens with the park through 7:30 p.m.

Star Wars D-TECH ME will be open Friday–Sunday each weekend and is located inside X-Wing Collectibles at Darth’s Mall. Advance reservations are required and can be made by calling 407-WDW-TECH (407-939-8324). 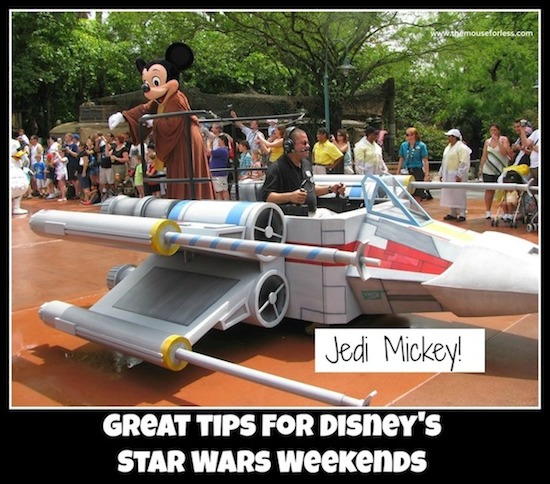 • Buses beginning running to Disney’s Hollywood Studios from Disney owned resorts at approximately 6:15 a.m. or later. For those who don’t have a car and wish to arrive earlier for celebrity autographs, you can ask the front desk or bell services at your resort to call for a taxi. While the park is typically slated to open at 8 a.m. during Star Wars Weekends, cast members begin admitting guests to the park between around 7:30 a.m.

• Don’t miss the Stormtroopers that stand on atop mobile columns inside the park entrance. Their mission: to keep all “Rebel Scum” out. It’s great fun to watch them heckling the crowd entering the park and worth showing up early for. If you miss the opening show, the Stormtroopers will also be patrolling the Star Wars Weekend stage later in the day, as well as appearing in the “Stars of the Saga” pre-show at Premiere Theater.

• For Star Wars Weekends information, to get your questions answered, and to sign up for some events, visit the ABC Sound Studio entrance area.

• Dress up! Both children and adults are frequently seen in Star Wars costumes during this event. It can add to the fun! If you don’t have your own Star Wars gear, a selection of Star Wars custom items are available at the event. There is also usually a face painting station that offers Star Wars creations in the Star Tours area.

• Make sure to stakeout your spot along Sunset Boulevard early, up to 2 hours in advance, for the special Symphony in the Stars Star Wars fireworks. The pre-show with characters starts at approximately 9:30 p.m. If crowds are heavy, you can also get a great view of the fireworks standing in front of 50s Prime Time Cafe although the stage with pre-show will not be visible. Special ear hats that glow with the fireworks show (as well as with Fantamic!) are available $25 at select merchandising locations throughout the park.

• For Star Wars Weekends merchandise and limited edition Star Wars merchandise, check inside Darth’s Mal. On the opening day of Star Wars Weekend, waits to enter Darth’s Mall can be several hours or more due to the purchasing of limited-edition merchandise to a horde of resellers. There’s even a line for this outside the park entrance in the morning with the lines to get Star Wars celebrity autographs, and believe it or not, it’s often the longest line! After the first few event days, however, crowds thin down at Darth’s Mall. Items consistently available for sale at this location include Star Wars artwork, shirts, hats, toys, collectibles, build-a-droid, build-a-light saber, personalized nametags (using Aurebesh) & iPhone cases, and Ashley Eckstein’s “Her Universe” clothing. The “Cast yourself in Carbonite” experience is also available at this location. Don’t forget to ask for your Annual Passholder discount on merchandise! Additionally, there are usually photo opportunities with Star Wars characters such as Luke, Leia, R2D2, C3PO.

• Darth’s Mall is not the only location for Star Wars merchandise. Don’t overlook Tatooine Traders at the exit of the Star Tours ride.

• Use hashtag #StarWarsWeekends on Instagram and Twitter. You also can join the conversation online with the official event hashtag, #DisneyTheForce.