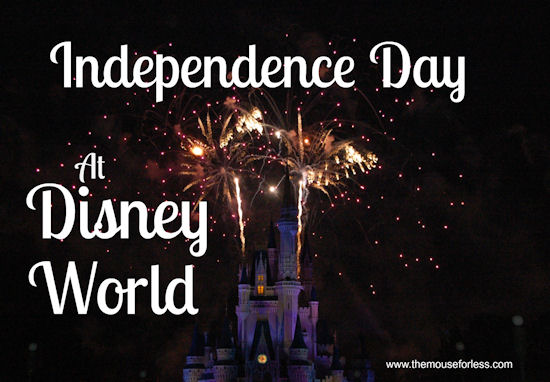 Get ready for a treat as Walt Disney World celebrates Fourth of July with a unique choice of fireworks shows at several different theme parks. To celebrate Independence Day, the Magic Kingdom will have special pyrotechnics and Epcot will add a patriotic “tag” to its fireworks spectacular.

Parks can fill to capacity early on July 4th. The Mouse For Less recommends arriving at your preferred park early and staying throughout the day. While the Walt Disney World Resort guarantees onsite guests will have park entry, it does not guarantee entry into a specific park, even if you have dining reservations. To make a long day more comfortable, pack any items you may need throughout the day and stow them in one of the theme park lockers at the front of the parks.

The following is information based on what has previously occurred. 2023 information will be posted as it’s released.

America’s birthday is celebrated on two days, as Guests will be able to enjoy Fourth of July festivities on both July 3 and July 4. Celebrate Independence Day with the spectacular “Disney’s Celebrate America! A Fourth of July Concert in the Sky.” The 14-minute fireworks spectacular rockets into the sky above Cinderella Castle at 9:15 p.m. on both nights. The firework show is set to an exciting musical score specifically created to stir a sense of pride in being American, while at the same time, inviting guests from around the world to feel part of the celebration.

Looking for other ways to celebrate Independence Day at the Magic Kingdom? Honor the country’s highest office by stopping at the infamous Liberty Square show, Hall of Presidents. The Hall of Presidents includes all 45 U.S. Presidents and traces the history of the prestigious office.

You also won’t want to miss the Flag Retreat which takes place at 5:00 p.m. each day on Main Street U.S.A. where Guests can pledge allegiance and hear patriotic songs as the flag is lowered. A veteran is selected for the honor and Guests looking to be a part of the show should check with City Hall to see if availability is open.

4th of July Fireworks Finale at the Magic Kingdom 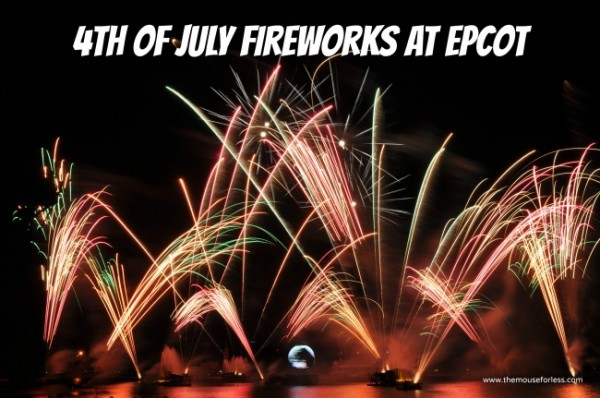 In addition, an afternoon of live entertainment kicks off at America Gardens Theatre with the Voices of Liberty, an eight-part, a capella Voices of Liberty. who will be performing on Independence Day at the American Gardens Theatre at 5:30 p.m., 6:45 p.m. and 8:00 p.m. Disney Characters dressed in Independence Day attire will meet guests during the day at The American Adventure.

The evening will end with a bang, literally, as Guests enjoy Harmonious which features dazzling special effects, brilliant fireworks, and fiery torches all choreographed to a musical score. The performance begins at 9:00 p.m. on July 4.

Daily at EPCOT, the American Adventure spotlights American history and heritage. The show is a journey through important moments in America’s history narrated by Audio-Animatronic figures of Benjamin Franklin and Mark Twain.

Disney’s Hollywood Studios will not be offering a fireworks spectacular. 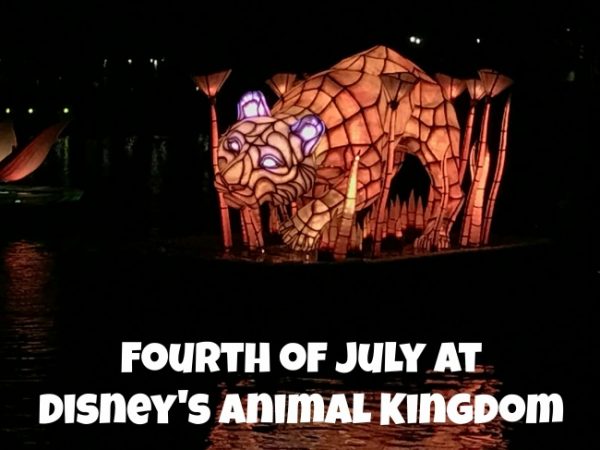 A special fireworks extravaganza is not held at Disney’s Animal Kingdom park on Independence Day.  The park will be open from 8:00 a.m. until 11:00 p.m.

The Seven Seas Lagoon glitter with patriotic pride when the Electrical Water Pageant sets sail. The pageant features the American flag and red, white and blue stars set to patriotic tunes, along with favorite sea creatures. Guests can view the water pageant nightly from various resorts surrounding the lagoon.

Times and events listed are subject to change. For the the most recent schedule, consult Walt Disney World’s calendar.