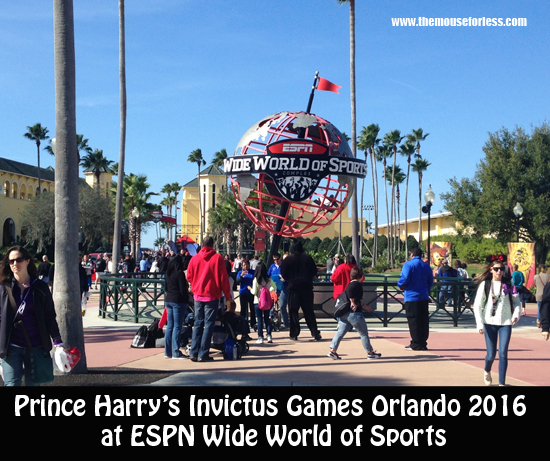 Fifteen nations are invited to participate in the 2016 Invictus Games, which are presented by Jaguar Land Rover and will be held from May 8 – 12, 2016 at ESPN Wide World of Sports Complex at Walt Disney World Resort in Orlando, Florida. The Invictus Games Orlando 2016 will shine a light on the recovery and rehabilitation that occurs through sport for the wounded, ill, and injured service-men and women who participate.

The word “Invictus” means “unconquered” and became famous after William Ernest Henley’s 1878 poem “Invictus” which is about strength during times of adversity. It embodies the fighting spirit of the wounded, ill, and injured Service members and what these tenacious men and women can achieve, post injury. The Games harness the power of sport to inspire recovery, support rehabilitation and generate a wider understanding and respect for those whom serve their countries.

Invictus Games competitors are the men and women who have come face-to-face with the reality of making a sacrifice for their countries, who put their lives on the line and suffered life-changing injuries. They have been tested and challenged, but they have not been overcome. They have proven they cannot be defeated. They have the willpower to persevere and conquer new heights.

The five-day event will involve more than 500 injured military veterans competing for their countries in 10 events ranging from track and field to wheelchair tennis to swimming. There will also be elaborate opening and closing ceremonies for the 15-nation event.

The Invictus Games, are the vision of Prince Harry, which made its debut in 2014 in London. Those Games featured a variety of international dignitaries including First Lady Michelle Obama and Dr. Jill Biden along with Prince Harry, who are all confirmed to attend this year’s event as well. This year’s Invictus Games are the first to be held in the United States.

Tickets are on sale now and there are several options available.

Please note that you will need to purchase a ticket for each event you wish to attend. Events will include archery, cycling, indoor rowing, power lifting, sitting volleyball, swimming, track and field, wheelchair basketball, wheelchair rugby and wheelchair tennis.

The event will also be be televised live on the ESPN family of networks with more than 40 hours of coverage, starting with the Opening Ceremonies.

The Opening Ceremony will include musical performances by British sensation Laura Wright and international star James Blunt and other surprise guests. The Ceremony will feature an unprecedented number of military performances, including the U.S. Army Herald Trumpets, U.S. Army Band, U.S. Navy, U.S. Air Force, U.S. Army Old Guard Fife and Drum Corps and the U.S. Marine Corps Silent Dill Team.  In addition, the audience will hear emotional first-person narratives from injured servicemen MSgt Israel Del Toro Jr., LCpl John-James Chalmers and Louis Nethercott.  The show is bound to be one of the most inspirational events.

Thousands of friends, family and fans will welcome more than 500 competitors representing 14 nations at the Opening Ceremony, held at the ESPN Wide World of Sports Complex, while audiences across the globe can watch the event live on ESPN 2.

During the Closing Ceremony, Prince Harry will recognize competitors for their achievements over the past four days and lead the handover of the Invictus Games flag to the Invictus Games Toronto 2017 organizing committee. In addition, the audience will hear firsthand from U.S. Team Captain, retired Army Captain Will Reynolds, as he shares his amazing personal journey.

Spectators, fans and loved ones will watch the Closing Ceremony at the ESPN Wide World of Sports Complex live while audiences around the world can watch the event live on ESPN 2. Fans can purchase tickets to this unforgettable and one-of-a-kind event for $45 each.

To make the most of the Invictus Games 2016 experience, consider staying at the Walt Disney World Resort Hotel. Guests will be able to take advantage of specially-priced Walt Disney World Theme Park and Resort Packages, available for Invictus Games attendees. Guests of Disney Resort hotels enjoy an array of special benefits, from airport transportation to extra time in the parks, while a variety of ticket options ensure that your visit will be filled with legendary Disney magic!

For those who are planning to attend this year’s Invictus Games, be on the look for a special selection of merchandise created in honor of the event, which will be available to both athletes and spectators at select locations at the ESPN Wide World of Sports Complex. Items will include adult apparel, youth tee, golf shirt, baseball hat, water bottle, mug, sport sling backpack, magnet and more.