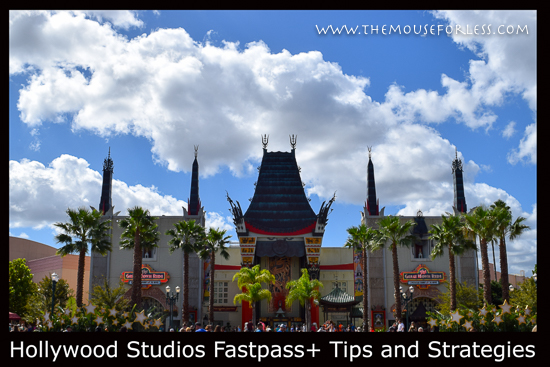 FastPass+  is a great system that lets you reserve up to 3 attractions or entertainment experiences in advance for each day of your Walt Disney World vacation. You can find out more details about the FastPass+ system, including when and how you can make your reservations, in our FastPass+ Guide.

You may have noted above, Disney’s Hollywod Studios Fastpasses come in two groups, or tiers. When you make your initial reservations, you can select a maximum of one attraction from group one, and then two selections from group two. Here are a few tips to help you decide which three experiences you will choose.

If your group wants to experience all that the park has to offer, you will want to make a FastPass+ reservation for Mickey & Minnie’s Runaway Railway, Millennium Falcon: Smugglers Run or Slinky Dog Dash. Since you can only choose one and due to the newness of these attractions, you will need to make a tough decision of which one to FastPass and which ones to stand in line for. All three will have long standby lines. If possible, our suggestion is to get the FastPass+ reservation for Slinky Dog Dash and then ride Millennium Falcon: Smugglers Run and Mickey & Minnie’s Runaway Railway in the standby line, however if it’s not possible, choose whichever attraction appeals to your family more for your FastPass reservation and then standby in the other two. As far as your Tier 2 FastPasses, you then may want to consider Toy Story Mania!, Tower of Terror, or Rock n’ Roller Coaster, or Star Tours – The Adventures Continue.

Do not choose to make a FastPass+ reservation for Fantasmic because choosing that nighttime spectacular as one of your FastPass options is not a good use. It means you won’t be able to use the fourth rolling FastPass+ option.

When visiting Disney’s Hollywood Studios with small children, Mickey & Minnie’s Runaway Railway should be your first priority. After that, consider Toy Story Mania. Then, you have a few choices, mostly involving shows. Some of these decisions will, of course, be made based on the interests of your family, but in general the two shows where you are likely to save the most time by using Fastpass+ are Disney Junior Dance Party! and For the First Time in Forever – A Frozen Sing-Along Celebration.

While the current total number of attractions at Disney’s Hollywood Studios might seem a little small, this park is often a favorite for the thrill seekers visiting Walt Disney World. To maximize your time as a thrill seeker, your should use your reservation from the first group for Slinky Dog Dash instead of Millennium Falcon: Smugglers Run. (We suggest using the Single Rider Line for Millennium Falcon: Smugglers Run in this instance.)

For your thrill seeking selections from the second tier, the choices should include Star Tours – The Adventures Continue, Tower of Terror, and Rock n’ Roller Coaster (which also has the option of riding in the Single Rider Line).

Disney’s Hollywood Studios features several fantastic shows, and you may choose to schedule one or two with a FastPass+ reservation. If you do so, there are a few things you need to know as you are planning the rest of the day.

First, the FastPass+ time listed for the show will be your arrival time, not the show time. For example, you may have FastPass+ time of 10:35am-10:50am for Beauty and the Beast – Live on Stage. This means you need to arrive between those times and will get seating for the 11am show. The show then lasts 25 minutes, so even though your FastPass+ time ends at 10:50, you will be busy until almost 11:30am.

Second, this shorter FastPass+ time allows you to schedule your FastPass+ closer to each other, or finish your third FastPass+ earlier, thus allowing you to schedule additional FastPasses more quickly. Especially with the number of shows available in Disney’s Hollywood Studios, you need to be careful not to accidentally book Faspasses on top of each other.

Fantasmic! is kind of a special case for Hollywood Studios FastPass+ planning. This “30-minute fireworks and water extravaganza” occurs once or twice on select nights at Disney’s Hollywood Studios. If you select Fantasmic! as a FastPass+ in your initial booking, that means you will not be able to potentially make additional rolling FastPass+ selections for additional Toy Story Land attractions (among others). Moreover, having a Disney’s Hollywood Studios FastPass + that you would not use until the very end of the night means that you would not have the opportunity to add additional Fastpasses after using your original three are used.

Some situations where this still might make sense, however include:

If you don’t fall into any of those categories, but still would really like to gain access to Fantasmic! with less of a wait, there is still one more option for you – the Fantasmic! Dinner Package, where you can buy a meal in the park and gain seating for Fantasmic! Visit our page for more details.