Supplement I to Guide to Disney’s MyMagic+

The United States Congress has sent a letter to Disney Chairman and CEO, Bob Iger, requesting answers to a series of questions regarding privacy concerns over MyMagic+ and Disney’s plans to use MagicBands at its Walt Disney World Resort. The letter comes from Congressman Edward J.Markey of Massachuesetts, Co-Chairman of the Congressional Bi-partisan Privacy Caucus, asking Disney to reveal what information they will collect while guests wear MagicBands and how that information will be used. Congress seems largely concerned with how Disney plans to use the information to market its products and services directly to children and how guests’ privacy will be protected. “Although kids should have the chance to meet Mickey Mouse, this memorable meeting should not be manipulated through surreptitious use of a child’s personal information,” writes Rep. Markey. Iger has until February 14 to respond to Congress’s questions.

In May of 2011, Rep. Markey introduced the Do Not Track Kids Act, legislation that amends the Children’s Online Privacy Protection Act of 1998 to extend, enhance and update the provisions relating to the collection, use and disclosure of children’s personal information and establishes new protections for personal information of children and teens.

Four days after the United States Congress sent a letter to Disney Chairman and CEO, Bob Iger, requesting answers to a series of questions regarding privacy concerns over MyMagic+, Iger responded. Iger’s letter to Edward Markey, Co-Chairman of the Congressional Bi-Partisan Privacy Caucus, states that Rep. Markey’s assertions are “ludicrous and utterly ill-informed” and further asserts that “it is truly unfortunate and extremely disappointing that [Congress] chose to publicly attack [Disney] before taking the time to review policies and/or contact [Disney] for information, which would have obviated the need for [Markey’s] letter.” Disney also points out that answers to “most questions already existed and were publicly available online at https://disneyprivacycenter.com/ and https://disneyworld.disney.go.com/faq/my-disney-experience/my-magic-plus-privacy/.

You may also be interested in reading an interesting article by Theme Park Insider that explains that Markey/Iger fight isn’t about Disney – it’s about the future of RFID tracking.

You can read the full text of Iger’s response to Congress below. 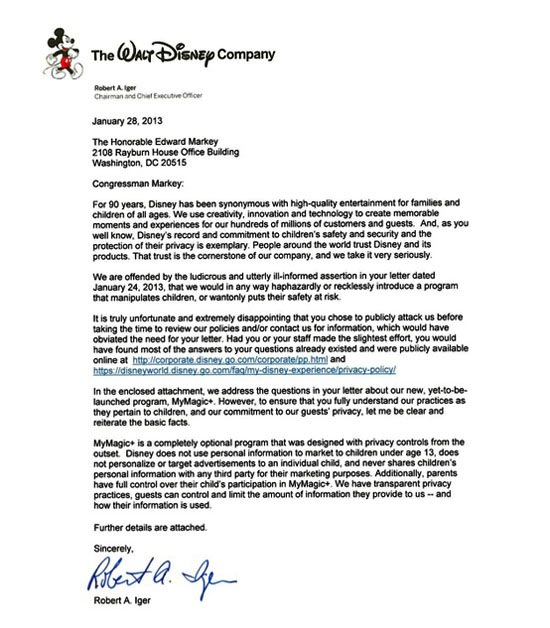 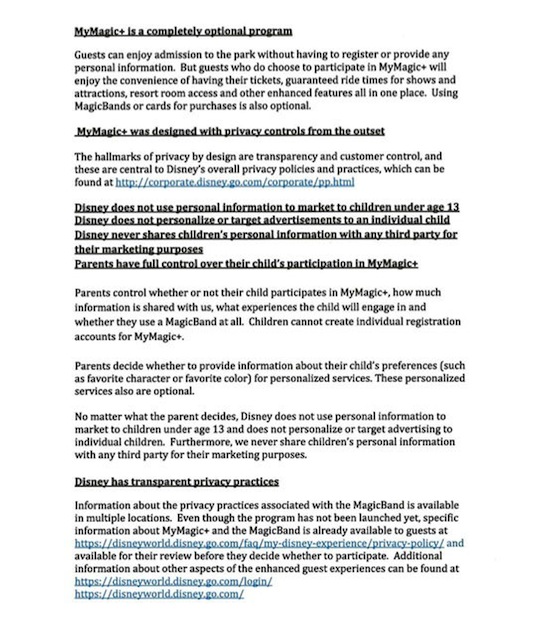 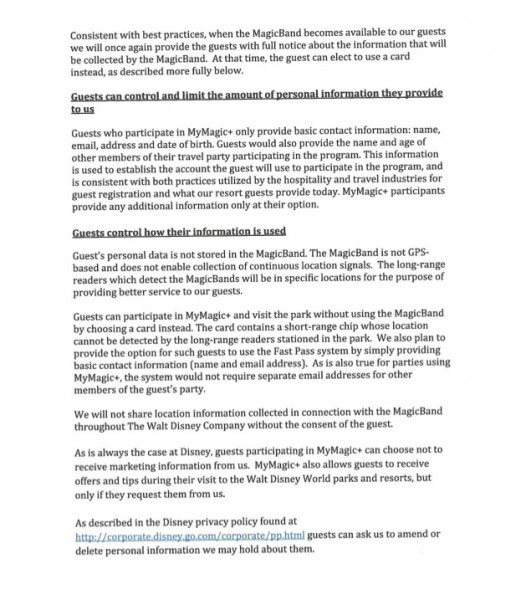