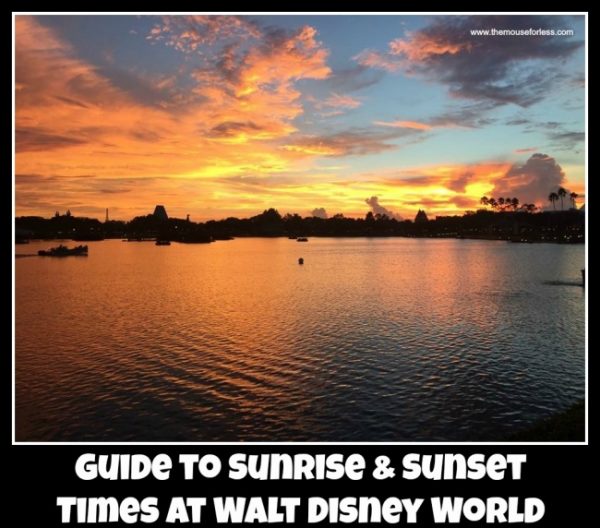 There are a ton of things to consider when deciding when to visit Walt Disney World. You may be constrained by work or school, or have preferences based on special events or weather.

Looking for the average temperatures in Orlando? Check out our Historic Orlando Area Weather Information page.

Guide to Sunrise and Sunset Times at Walt Disney World

January is some of the least average daylight for the whole year, and those earlier sunsets allow for earlier nighttime spectaculars. This has meant that the Magic Kingdom fireworks might move up to 8:00 p.m., and Fantasmic will regularly be shown at 7:00 p.m., followed by Star Wars: A Galactic Spectacular at 7:45 p.m. Epcot Forever having a 9:00 p.m. show is a good bet.  Rivers of Light is able to have an earlier show, around 6:45 p.m., and a later show around 8:00 p.m.

In addition to less daylight, the crowds typically fall off after the peak of the holiday season, and theme park hours are shortened as a result. You will likely see the Magic Kingdom open around 9 am and close around 8 pm on weekdays and 9 pm or 10 pm on weekends. Hollywood Studios and Animal Kingdom both have been pretty consistent with 9 am to 7 pm operating hours, and Epcot is steady from 9 am to 9 pm.

As hours of daylight start to get longer in February, so too do park hours. Starting after President’s day, you might see closing times as late as 11 pm or midnight at the Magic Kingdom, and Animal Kingdom and Disney’s Hollywood Studios will both start closing at 8 pm pretty regularly. Even with those extended hours, however, the timing of nighttime shows stays pretty consistent from January.

Daylight Saving Time begins on the second Sunday in March, so all times shift forward one hour at that time. The most significant scheduling change that seems to happen around that time is that both the Hollywood Studios nighttime shows and Rivers of Light will likely push back their showtimes by about an hour literally overnight. You won’t notice this sort of change either in Epcot or Magic Kingdom, because those shows will likely already be playing at later times anyway.

Corresponding to these later nighttime spectacular times, the park hours in both Disney’s Hollywood Studios and Disney’s Animal Kingdom will start extending to around 9 pm regularly.

Tip: This is a time of year when you are likely to have nighttime fireworks displays in the Magic Kingdom, Epcot, and Disney’s Hollywood Studios happening at precisely the same time (most likely 9 pm). As such, this time of year could be a great time to have dinner at California Grill, where you not only can enjoy Happily Ever After but can also see pieces of Epcot Forever and Star Wars: A Galactic Spectacular in the distance.

Park hours and nighttime shows are pretty similar in April as they were in March. The variability in hours and showtimes here is more tied to when Easter falls and not necessarily just the length of the day.

As sunsets start heading well past 8 pm, so too, with great regularity, the nighttime spectaculars. Once May arrives, you will probably not see any nighttime shows before 9 pm, and this means you will also not see any parks closing before that time. May also sees the unofficial beginning of summer with Memorial Day weekend, which will be accompanied by a regular extension of park hours, particularly in the Magic Kingdom, which will shift normal closing time to 11 pm or midnight most nights surrounding the holiday weekend.

July looks very much like June in day length, park hours, and nighttime shows. The only real difference is the 4th of July, which has extended hours and fireworks displays.

The shortening of days in August lines up with the traditional start of school for many parts of the country. The earlier sunsets and smaller crowds mean that the parks will close earlier, and the nighttime shows will happen earlier. The biggest changes are seen in the Magic Kingdom, which will start closing as early as 8 pm on normal days (Mickey’s Not So Scary Halloween Party will also sometimes start in mid to late August). Disney’s Hollywood Studios will only shift slightly, moving up Fantasmic to 8:30 pm, Star Wars: A Galactic Spectacular to 9 pm, and park closing also to 9 pm.

Early September continues the hours and timing of late August. After the Fall Equinox mid-month (usually the 22nd or 23rd), some of the nighttime shows will typically move up a little bit in the schedule, with Fantasmic at 8 pm, Star Wars: A Galactic Spectacular, at 8:30 pm, and  Rivers of Light at 8:15 pm.

October will see a few more reductions in park hours, specifically the Magic Kingdom will rarely be open past 9 pm on normal nights and Disney’s Animal Kingdom will usually close at 7 pm or 7:30 pm. Additionally, this time of year will see Rivers of Light only occur a few times a week. The one park moving in the opposite direction is Epcot, which begins to extend hours and move Epcot Forever for the first real-time of the year. The weekend crowds from the Epcot Food and Wine Festival will correspond with a closing time and Epcot Forever performance at 10 pm many Fridays and Saturdays.

The first Sunday in November is the customary end of Daylight Saving Time, so all times shift back an hour at that time. The park times and nighttime spectaculars begin the month pretty consistently to what was going on in October, but start extending hours closer to the week of Thanksgiving. The parks will typically stay open a little later starting then; Epcot Forever will shift to 9:30 pm and Happily Ever After will be shown around 10 pm.

December sees the shortest days of the year, leading up to the Winter Solstice, which takes place between December 20th and 22nd each year. Leading up to that point, park hours will contract a little and then rapidly expand right around the Solstice through New Year’s Eve. This is one of the busiest times of the year so that park hours will be significantly expanded, and some of the nighttime shows might have multiple showings or special holiday occurrences. Be sure to check your times guide for specifics.

All sunrise and sunset time information based on 2017 numbers obtained from Time and Date. 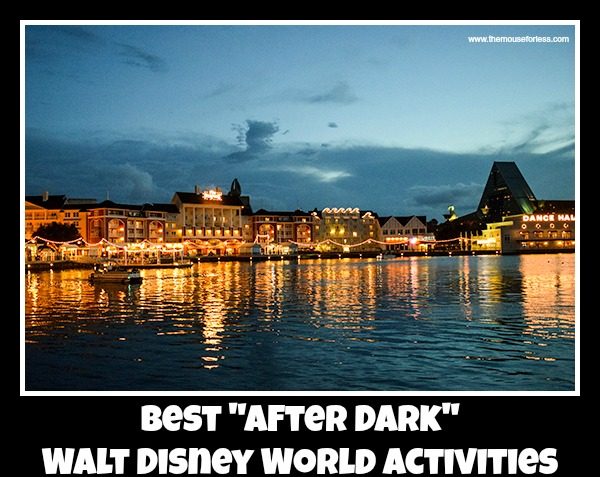 It goes without saying that Disney knows how to put on a show – and their nighttime spectaculars routinely set the standard for large scale evening entertainment. But besides these fantastic shows, Walt Disney World offers a ton of wonderful activities for you and your family to enjoy on your next trip. These are a few of our favorites.

From 6 pm – 9:30 pm, guests can visit Disney’s Fort Wilderness Resort & Campground or Disney’s Port Orleans Resort – Riverside can enjoy a leisurely scenic ride through some of Walt Disney World’s most beautiful areas. Reservations are recommended, but walk-ups are accepted.

Guests at Fort Wilderness can also enjoy an old-fashioned wagon ride around the campground. Some wagon rides even offer a view and audio of the Magic Kingdom fireworks!

Check out a Resort Campfire

The Deluxe resorts at Walt Disney World offer evening campfires, often with s’ mores. Sometimes you need to purchase the s’ mores kit. As a special treat for guests at the Campsites at Disney’s Fort Wilderness Resort, Chip ‘N Dale will come to the campfire for a sing-a-long! Be sure to check your resort activity schedule for timing and specific information during your stay.

One of the most beloved performers throughout all of Walt Disney World is YeHaa Bob. Typically performing Wednesday-Saturday, Bob Jackson livens up the River Roost Lounge at Disney’s Port Orleans – Riverside with exciting, engaging, and entertaining piano playing and singing.

If you can’t make it over to the River Roost, there is bound to be a wonderful lounge or bar somewhere nearby, from Trader Sam’s to Victoria Falls. Find a new favorite near you, grab a drink, and relax!

Disney’s Animal Kingdom Lodge is known for the savannas that allow guests to see beautiful and exotic animals from throughout the resort – even after dark! Both Kidani Village and Jambo House will have Night Vision Animal Viewing available from sundown for a few hours. Check your resort activity guide for specific times and locations.

Want more? You can also buy tickets to a special “Starlight Safari,” during which a cast member will drive you through the savannas allowing you to use night vision goggles and get up close and personal with the animals.

While there is much more to Walt Disney World than the rides, the rides are still pretty great, and some of these rides can give you quite a different experience once the sun goes down. Whether it is overlooking the park in lights on Splash Mountain or the Tower of Terror, getting more of a thrill on Test Track or Big Thunder Mountain Railroad, or just trying something new on Kilimanjaro Safaris or Dumbo, many of the rides with an outdoor component can feel very different at night. Find your favorite and check it out!

Just outside the International Gateway to Epcot, and a quick walk or boat ride from Disney’s Hollywood Studios, The Boardwalk is a fun dining, shopping, and entertainment area that comes alive at night. Whether you are enjoying a street performer, or taking in the nightlife at the Atlantic Dance Hall or Jellyrolls dueling piano bar, there is something for everyone at the Boardwalk.

Planning a Walt Disney World Vacation?
For a Free no-obligation quote, contact our sponsor, The Magic For Less Travel. The Magic For Less Travel is an Authorized Disney Vacation Planner and has been helping guests plan magical vacations since 2002. Receive the best prices and free travel planning services. Their fee-free services will help you save time, money, and stress while planning a vacation designed around you and your needs!
Request Your Free Quote Today!