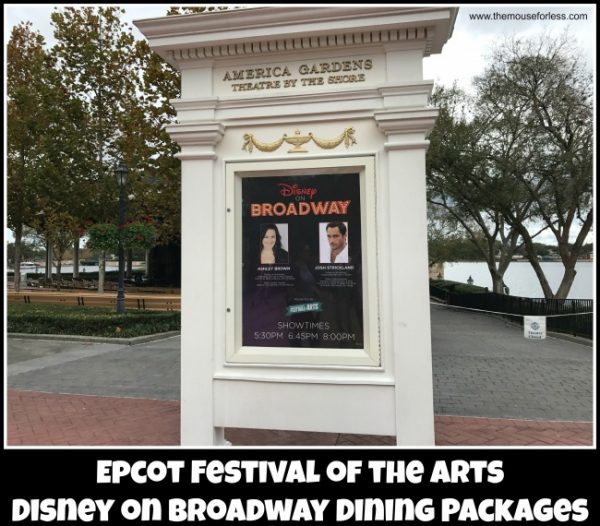 During the Epcot International Festival of the Arts, mixed with a collaboration with Disney Theatrical, Guests will be able to experience a showcase of favorite music and Broadway talent at the America Gardens Theatre stage. Guests will be able to enjoy these Broadway actors and actresses performing songs from some of Disney on Broadway’s award-winning shows. Showtimes are 5:30 p.m., 6:45 p.m. and 8:00 p.m.

The following are details from 2022 to assist with pre-planning. 2023 information will be posted when released.

Kerry Butler (Beauty and the Beast) and Telly Leung (Aladdin)

As always, entertainment is subject to change without notice. Disney on Broadway performances are included with Epcot admission.

TheMouseForLess Tip: If you would like a seat out of the sun (or the rain), be sure to arrive at the America Gardens Theatre at least 90 minutes prior to showtime to secure a spot in the front, covered portion of the theater.

Please note that your dining reservations must be at least two and a half hours prior to showtime. Tax and gratuity are not included included in the price. Valid Epcot theme park admission is required and not included with the dining package. To make a reservation, it will require a credit card guarantee. In addition, those who are on the Disney Dining Plan or the Deluxe Dining Plan will be accepted and it will cost two table service credits.

Check Our Epcot Festival of the Arts Festival Page for more helpful information.

Holiday Spectaculars Return for 2022 at the Disneyland Resort