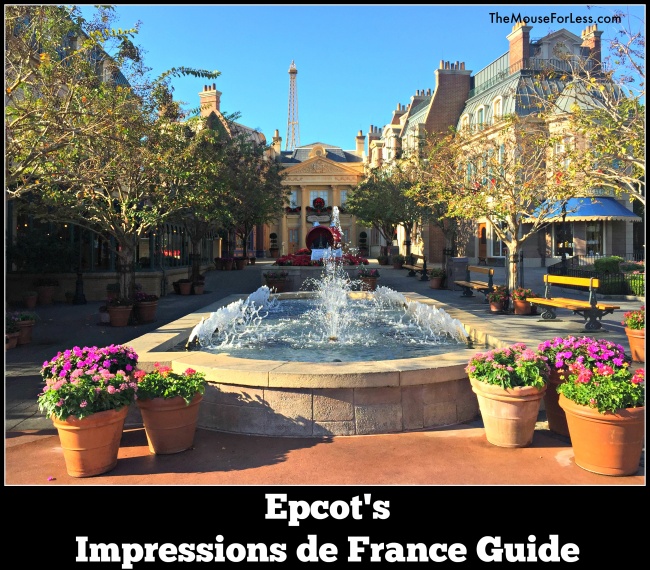 Enjoy this serene French travelogue, an Epcot classic, inside the Palais du Cinéma.

Age Recommendation: All ages, though adults will likely enjoy it more

Shopping: Guests can shop among several locales in the France Pavilion. Colognes, perfumes, and bags pervade “Plume et Palette”; more fragrances in addition to cosmetic goods are offered at “La Signature”; apparel and kitchen goods are sold at “L’Esprit de Provence”; and “Souvenirs de France” is the spot to purchase general French merchandise, such as guide books, models of the Eiffel Tower, and apparel.

Dining/Refreshment: Several dining options are offered in the France Pavilion. At Chefs de France, guests can enjoy a table service lunch or dinner in a casual setting; menu items for lunch include French soups, salads, cheese, flatbreads, fish, chicken, and sandwiches; and dinner brings salmon, short ribs, steak, and duck. Located one floor above Chefs de France, Monsieur Paul, which was known as “Bistro de Paris” from its 1984 debut until 2012, serves escargot, mussels, lobster, snapper, scallops, chicken, duck, and beef in an upscale setting at dinner only. Diners at either Chefs de France or Monsieur Paul can opt for a prix fixe menu, which includes a choice of an appetizer, an entrée, and a dessert, in place of the regular a la carte offerings. From Epcot’s opening day, October 1, 1982, until 1997, the France Pavilion featured a third table service restaurant, “Au Petit Café,” which was an outdoor, sidewalk café next to Chefs de France. Au Petit Café was thereafter enclosed into the Chefs de France building.
Guests craving snacks or desserts can satisfy their desires at either the L’Artisan des Glaces ice cream parlor or the Boulangerie Patisserie les Halles bakery, which serves soups and sandwiches in addition to its pastries. Finally, wine, beer, and champagne samplings are available at Les Vins de Chefs de France.

Restroom: Facilities convenient to Impressions de France are situated in the new section of the France Pavilion, heading toward Remy’s Ratatouille Adventure. 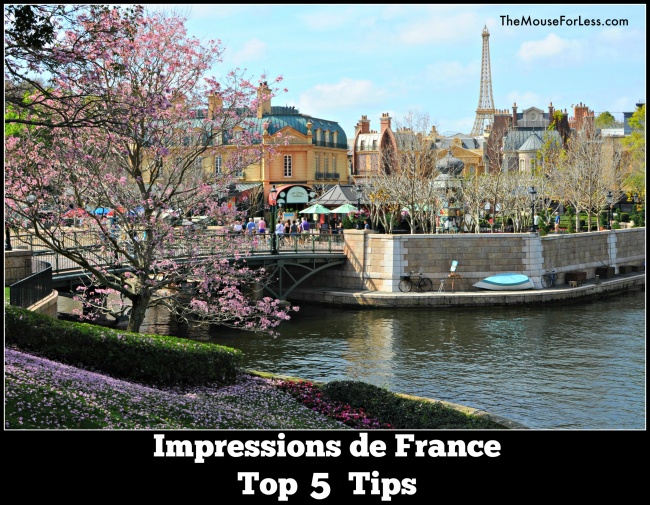