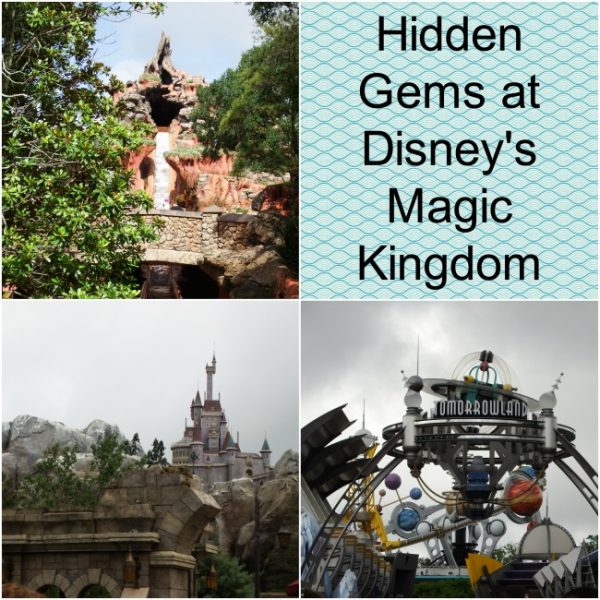 Ride the Jungle Cruise after dark – the Cast Members are just funnier then! Not to mention that it is more exciting in the dark!

Be sure to get a Dole Whip from Sunshine Tree Terrace. These treats are delicious and extremely popular! 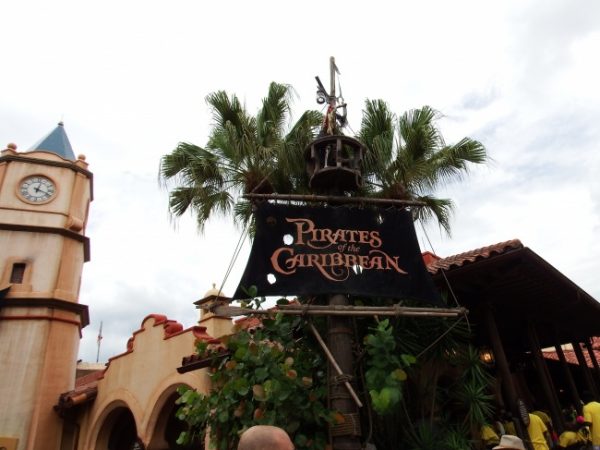 Look at the Pirates of the Caribbean attraction, the building at Disney is called Castillo de Morro. It’s construction design was based on a real Spanish fort.

Inside the right-hand side queue for Pirates of the Caribbean keep your eyes peeled for two skeletons playing chess. They appear to have reached a stalemate quite some time ago, but were too stubborn to give up the game!

Visit the Enchanted Tiki Room, this was the first show starring audio-animatronics. Can you imagine watching the birds sing words in Disneyland 1963?

The view from the Swiss Family Treehouse can make for a unique perspective on the park, and for a nice photo.

The Skipper’s Canteen restaurant features a room dedicated to S.E.A. the Society of Explorers and Adventurers a fan favorite from Pleasure Island which closed in 2008.

Check out the Sword in the Stone near Prince Charming’s Regal Carousel. You never know if you might be able to pull the sword free!

You should also visit Prince Charming’s Regal Carousel. The horses are genuine relics from the past, and one of them in particular, decorated with gold, was Mrs. Disney’s favorite.

For Cinderella fans, you can see her in her crown anytime you wish. As you enter Fantasyland through the Castle archway, look for the Cinderella fountain on the left. You’ll see a painting of Cinderella on the wall with the crown well above her head. Take a drink from the fountain, and at the same you are ‘bowing’ to the Princess Cinderella. As your head is down, instead of looking at what you’re drinking, peek up at Cinderella — she’s now wearing her crown!

Be sure to walk through the castle and look at the beautiful mosaics inside. These were put together by hand taking around two years to complete. 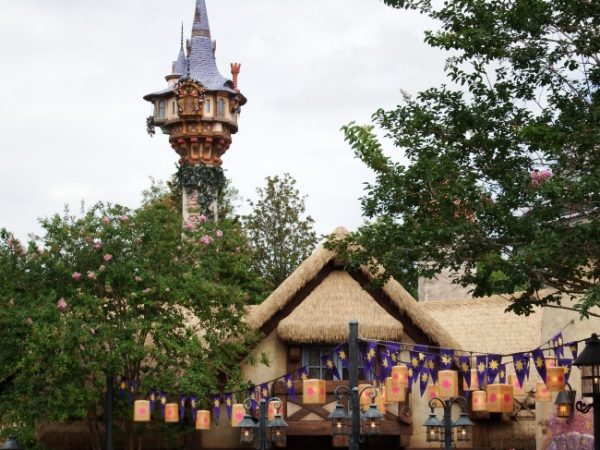 At the Winnie-the-Pooh attraction be sure to look for references to Mr. Toad’s Wild Ride, the attraction that previously occupied this space. As you enter owl’s house look to your left for a portrait of Owl receiving the deed to the attraction from Mr.Toad. 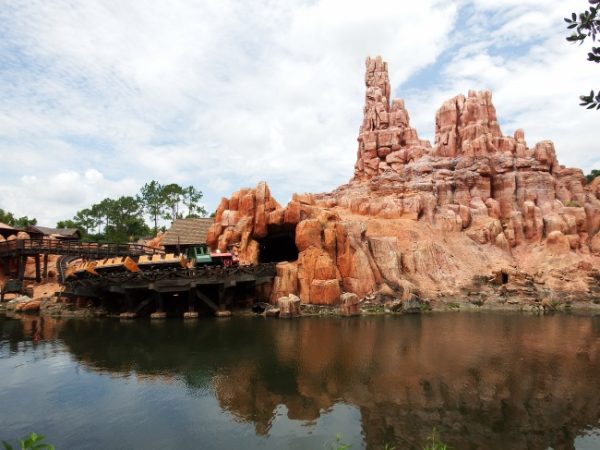 At the exit to Big Thunder Mountain Railroad look in the rockwork to the left to spot a hidden Tinkerbell.

Be sure to explore the caves and the fort on Tom Sawyer Island. These are some fun hidden details that many guests miss.

If you are looking for references to the once popular Davy Crockett movies and television series, Frontierland is the place to search. Country Bear Jamboree features a tribute to the frontiersman and Big Al’s merchandise cart right across the way sells coonskin caps just like the one Davy Crockett proudly wore.

Stop for a break, in the rocking chairs just to the side of The Hall of Presidents in Liberty Square. A great spot out of the sun for “people watching”.

Take a glance at the ground you are walking on. The street is colored to represent the waste and excrement that Americans dumped in the street during Revolutionary times. They did not have sewer systems yet!

Look up into the liberty tree and count the lanterns that represent colonial America.

Spare a glance for the Liberty Bell as well, a genuine reproduction of the actual bell in Philadelphia that was created to celebrate America’s 200th birthday. 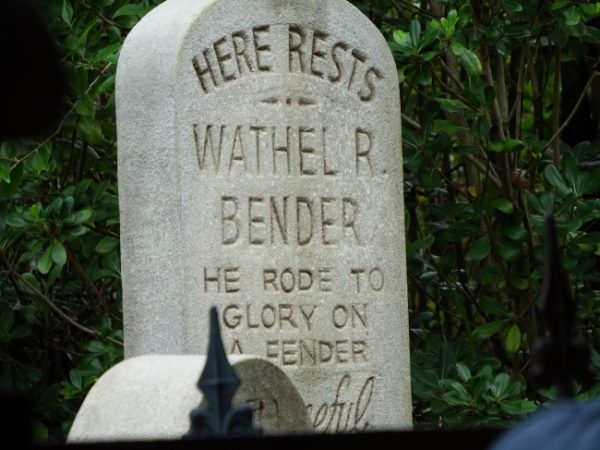 In the queue for the Haunted Mansion look for an engagement ring in the pavement. Also be sure to read the tombstones in the queue and around the exit of the attraction. Some of the memorials are quite hilarious. Finally, look at the pet cemetery on you left as you exit, there is a tomb for Mr.Toad referencing the old Fantasyland attraction Mr.Toad’s Wild Ride.

If you are taking a ride on the Liberty Square Riverboat keep your eyes peeled for Beacon Joe, an animatronic wearing overalls and sitting in a rocking chair. This minor character plays many roles for Disney. This same animatronic is used in Pirates of the Caribbean and the Haunted Mansion at Disney World. He can also be seen at Disneyland and Tokyo Disney. 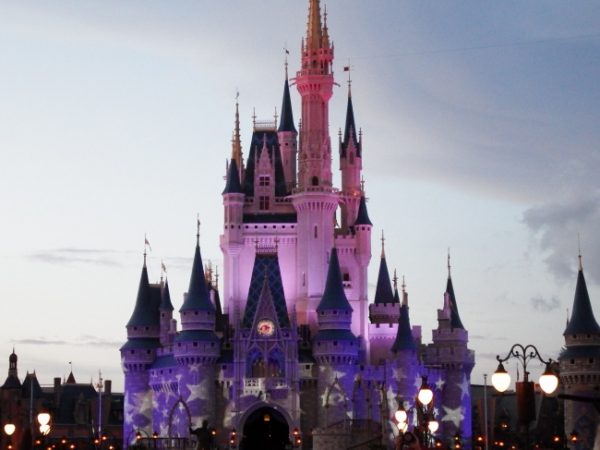 In the Main Street Station there is an antique music box. Pop a quarter in for some music, or check for the short movie machines around the station.

Each day on Main Street U.S.A. there is a Flag Retreat (Check your TIMES GUIDE for exact time, generally 5pm or 5:30pm). A veteran is selected for the honor. Check inside City Hall to sign up to be the veteran. 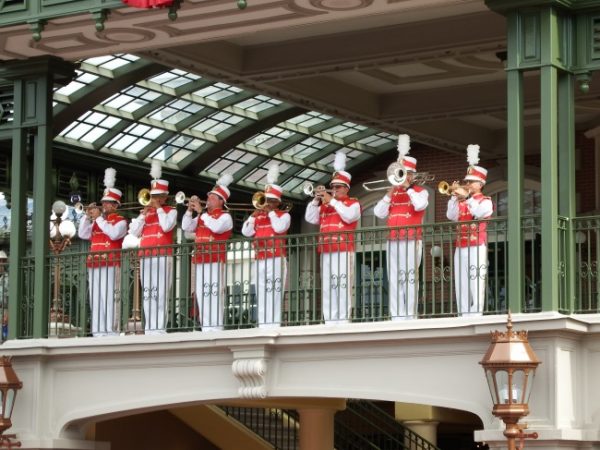 At Tony’s Town Square Restaurant, look for Lady and Tramp’s paw prints in front of the stairs that lead up to the restaurant.

Camera Shop: I love the photo gallery area in the rear of the Kodak Camera shop on Main Street USA. The wooden cut-outs of different Disney cartoons make great photo ops with your kids sticking their own heads through.

Check out the shops on Main Street and pick up the old phone on the wall inside; you can listen in on an old-time phone conversation between a mother and daughter on the party line!

Main Street U.S.A. has a lot of little details ranging from live entertainment to turn of the century transportation.

Celebrating a Birthday? Stop in at City Hall and get a Birthday Button for well wishes all day long.

The Harmony Barber Shop on Main-street is in the corner of the courtyard next to the gates the parade starts/ends at. In addition to great hair-cuts (men and women, boys and girls) they will do some magic dusting to make your “do” even more magical.

Check out the glass blower on Main Street. It is amazing to watch these artists create new things. 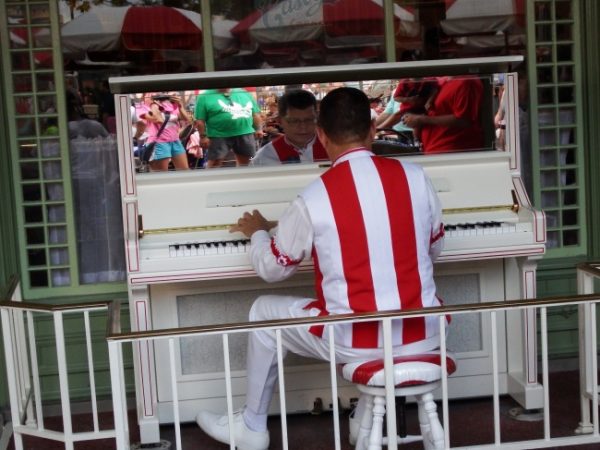 Look up! The windows of the upper stories of the shops are labeled with the names of famous Disney Legends and Imagineers. Having a Main Street USA window is one of the highest honors bestowed by Disney. 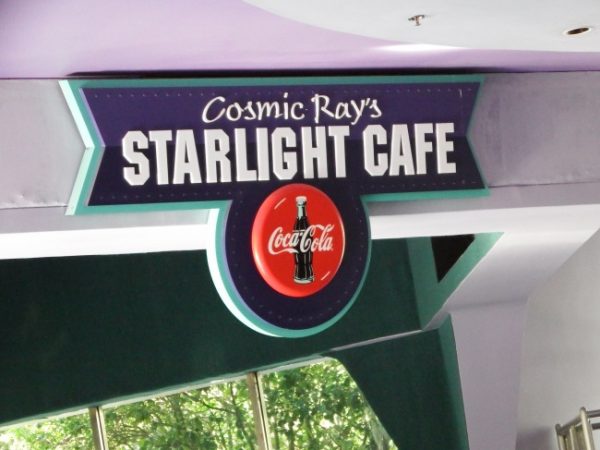 Check out Cosmic Rays Starlight Café, and while you are there take in Sonny Eclipse’s show (the piano player).

Ride the Tomorrowland Transit Authority at night for an awesome view of the castle all lit up. This is also a great way to get a very small taste of Space Mountain for the little ones.

The Carousel of Progress is a great attraction to investigate. Along with It’s a Small World, this attraction was developed by Walt Disney himself for the New York World’s Fair.

Look for the robot selling newspapers near the entrance to the Tomorrowland Transit Authority Peoplemover. The headline features the lovable alien, Stitch.

In the queue for Buzz Lightyear Space Ranger Spin look at the Sector maps on the left side wall. One sector has a land mass that is shaped very similarly to a famous mouse! 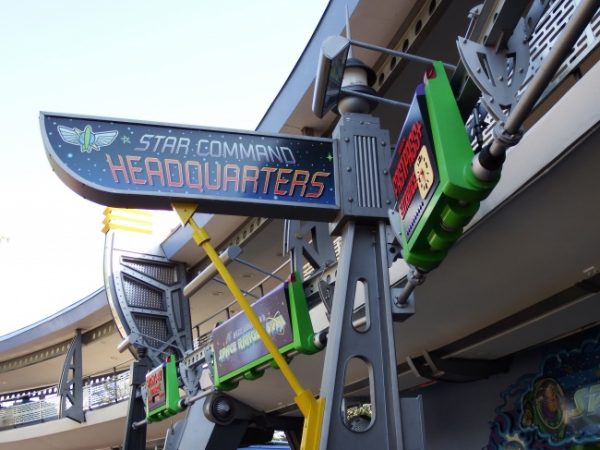 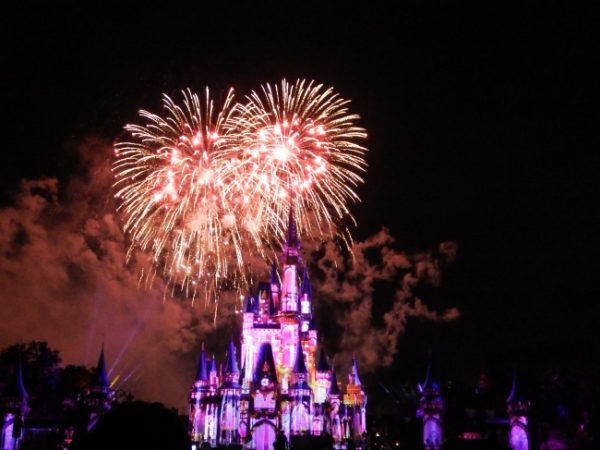 Ride the Walt Disney World Railroad around. Try riding in the last car. The conductor will often let a child (or two or three) stand in the back and be guest conductors, helping push the spiel button or saying “all aboard” over the mike. You can board the train at the Main Street Station, in Frontierland and in Storybook Circus.

Don’t miss the daily parade to catch a view of some rare characters. Especially be on the look out for the fire breathing dragon, Maleficent!

Be sure to watch the nighttime fireworks show, Happily Ever After. This show features references to classic Disney films and has some amazing pyrotechnics! Keep your eyes peeled, with a little pixie dust you may even see Tinkerbell fly!