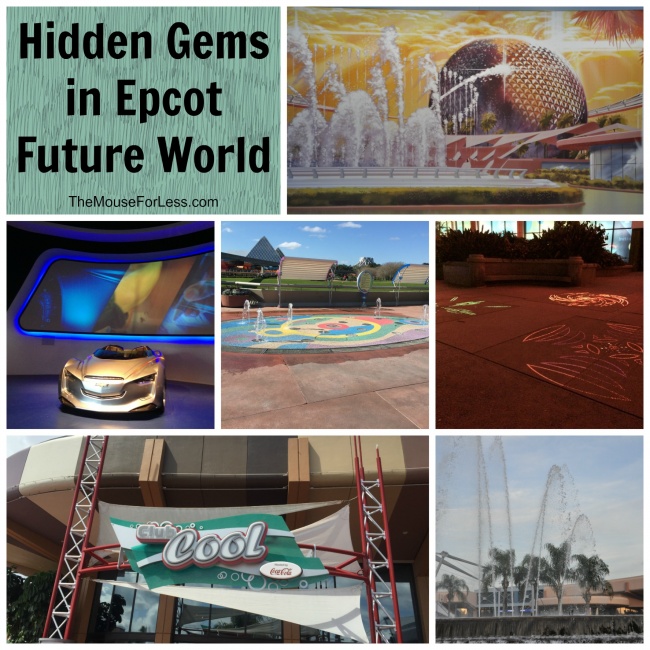 Several opportunities for water play, check out the “Cool Wash” area just west of Test Track. There’s also two play fountains, one located on the main walkway from Future World to the World Showcase, and one over near the walkway to Mission Space (if you think your kids might be playing in these I recommend packing a change of clothes).

The leap fountain is located outside the Imagination! pavilion, watch the water leap from pad to pad. Also check out the upside down water fall (water up?) where the water is actually flowing up rather than down.

Don’t forget to spend some time watching the big fountain in the middle of Future World, it is officially called Fountain of the Nations, but referred to by many as the Dancing Fountain. Make sure and check it out during the day and at night for a performance with colored lights.

Looking for a cool free beverage? Something a little different than you what you are used to? Stop in at Club Cool, located on the west side of the main fountain in the middle of Future World, be sure to try Beverly or other Coke products from around the world.

If you are walking past Spaceship Earth at night, make sure and look down for a fascinating fiber optics light show. The kids (old and young) will love it. And often there’s no line at Spaceship Earth at night, maybe hop in for one last ride? While you are in there look for the scene at the top where the moon is showing, you may see a lift that is used to get Mickey and others to the top for special events.

A marker that (was) the center of WDW is on the path to Living with the Land, just west of Innovations West, behind the fountain and towards the Lagoon. It once the marked the center of property, but now it’s just a circle in the pavement. This is most likely not the center of WDW now, if it ever was, but tradition says it once was!

Have you ever wondered why you can stand under Spaceship Earth when it is raining and not get wet? This is due to a unique gutter system beneath the exterior of the attraction that routes water through the legs supporting Spaceship Earth.

Look for Hidden Mickeys throughout the attraction. Hint: One is painted on the left at the entrance to the Renaissance scene.

The mosaics on each side of the entrance are exact mirror images of each other except for one tile on each side. Can you spot the difference?

Listen to the seagulls at the entrance to the attraction.

Explore the SeaBase and look at the interactive exhibits. The aquarium is massive holding 5.7 million gallons of water!

Take a glance at the model of the moon outside the attraction. The many moon landings are documented on its surface.

The red planet outside the attraction was a challenge to paint. Imagineers looked at around 100 colors before settling on the current selection.

At the end of the attraction check your score to see how your car measured up against other guests’ designs. 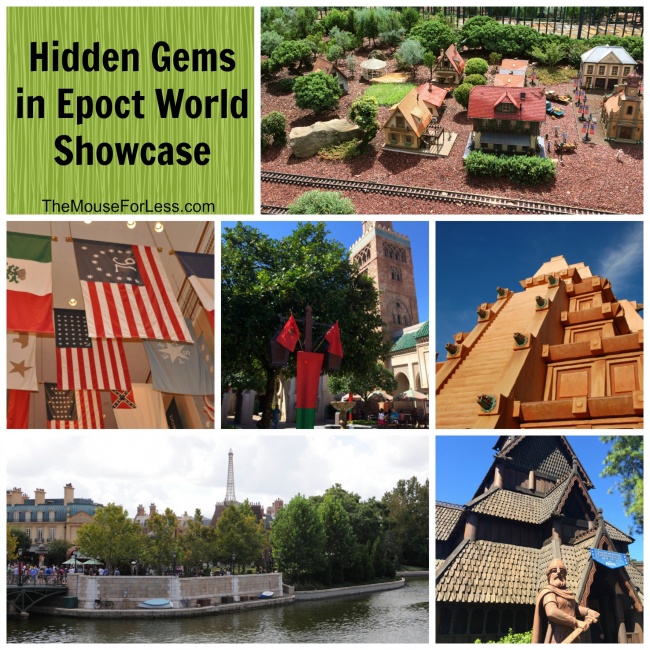 Visit the exhibit just inside the pyramid. This exhibit is frequently updated.

Look for the 3 Cabelleros animatronics at the end of the Gran Fiesta Tour Attraction.

As you enter Norway the first building has a roof made of real sod, back in the “ole country” this would be trimmed by the goats, however here in WDW the horticulturists take care of it.

Make sure and go into the Stave Church, there are only 28 of these left in Norway. I also know of one larger than the Epcot model built in the Black Hills of South Dakota, all the pieces for that one were shipped in from Norway.

Inside the queue for the Anna and Elsa Meet and Greet look for 2 dolls that look like the beloved princess and queen. Also look for a tapestry featuring trolls that pay homage to the closed Maelstrom attraction that was replaced by Frozen Ever After.

The School Bread is a very popular treat from the bakery in Norway.

Make time for the acrobats show in China, it is amazing to watch the gymnasts perform.

Check out the temple ceiling and gardens around the pavilion. The architecture is beautiful!

For an inexpensive souvenir, head to the back of the gift shop for a personalized fan.

Germany offers wine tasting for a small fee, and then you can order up your favorite and have it sent to your hotel room or the front gate for pickup later in the day.

Spend some time enjoying the train exhibit, which often has seasonal differences

Look for the clock with the figures that pop out on the hour in the center of the pavilion.

Can you find the pickle tree? If you are not familiar with the pickle legend, ask a cast member to let you in on the tradition.

Walk over the bridge and look in the lagoon to see gondolas.

The Voices of Liberty are a showstopping a capella group that perform patriotic and folk tunes. Be sure to see this group.

Look through the American history exhibits in the pavilion.

Enjoy the American Adventure show performed by audio animatronics for a brief tour over the nation’s history.

Try on the traditional Japanese kimonos in the department store in Japan or pick out a pearl from a fresh oyster.

The 5-story pagoda represents an element some Buddhists believe all things were created from: Earth, Water, Fire, Wind and Sky.

The Morocco pavilion offers a free tour of their “country” including cultural and historical bits about this fascinating country.

Notice the wall mosaics in Morocco, each one has at least  one flawed or cracked tile on purpose, as they believe only Allah can create perfect things.

The bridge crossing from France to the UK represents crossing the English Channel. Look for a bike and an easel around the channel as if an artist were painting and just stepped away for a minute.

Explore the back of the pavilion to find sweet treats in the popular Patisserie and Ice-Cream shop.

Look for the butterfly garden in the UK; it is located in the Not-a-garden where the apothecary grows his herbs. There is a butterfly box here where the butterfly cocoons are protected until they hatch.

Look for the hedge maze. It is normally a hit with kids who want to run and play.

Stop in the Rose and Crown Pub to hear the piano player perform classic pub music.

Look for the giant totem poles. These tell represent folk stories about taking care of animals and nature. Ask a cast member for more details about the stories.

World Showcase Passports are available at shops/carts throughout Epcot. You can get them rubber stamped and signed in each country at the Kidcot station; they also come with a sticker for each country.

Speaking of the Kidcot Stations, you can make a free craft, as well as color and decorate it. Get a stamp in each country and a signature from the Cast Member (remember the Cast Members are from each country, so they are a wealth of information for inquisitive minds, young and old alike). If you finish up all the countries you have a nice keepsake!