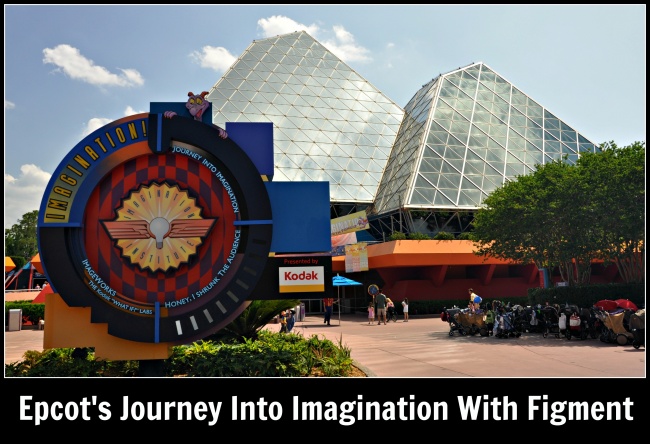 Journey into Imagination with Figment is located in Future World, Epcot.  Join Dr. Nigel Channing (Eric Idle) and his mischievous purple dragon, Figment, on a whimsical open house tour of the Imagination Institute.

Duration of Ride: About 6 minutes

Typical Queue Time: Short to moderate; usually tops out at about 30 minutes

Shopping: A gift shop is situated at the attraction’s exit following the ride and the interactive “ImageWorks” activities. Many of the souvenirs sold here involve Figment.
Dining/Refreshment: One full service restaurant and one counter service restaurant are featured in the adjacent “The Land” pavilion. The full service restaurant, Garden Grill, serves “all-you-care-to-enjoy” family style character meals at breakfast, lunch, and dinner. The breakfast offerings include biscuits and gravy, scrambled eggs, bacon, waffles, and sticky buns; while the lunch and dinner platters feature bread, a salad, beef, turkey, fish, mashed potatoes, rice, and macaroni and cheese. The restaurant slowly rotates during your meal, affording diners views of the “Living with the Land” boat ride. Chip ‘n’ Dale, Farmer Mickey, and Pluto are usually in attendance at Garden Grill. Meanwhile, guests preferring a counter service meal can choose among sandwiches, Asian dishes, soups, salads, chicken, and pork at the Sunshine Seasons food court.

Restroom: Facilities are situated adjacent to the “Imagination!” pavilion.

Top 5 Tips for Journey Into Imagination With Figment 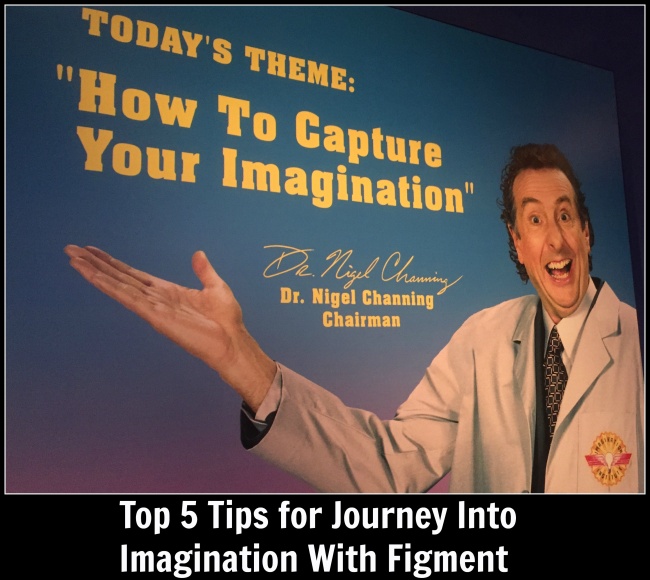