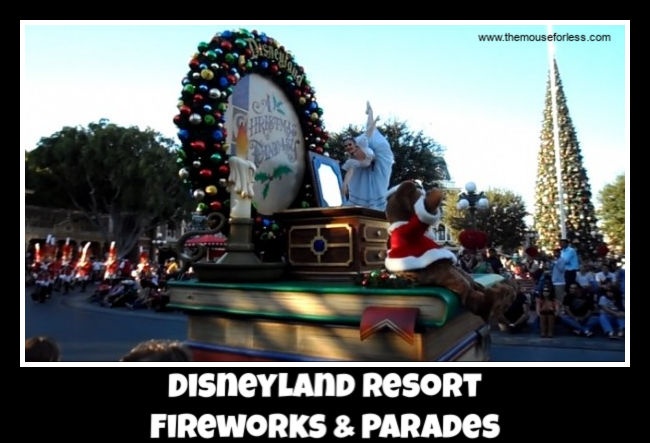 At the Disneyland park there are a number of Firework shows to be seen throughout the year.  Each show is unique in it’s own way, using thousands of pyrotechnics to get the job done.  All Firework shows at Disneyland and Disney California Adventure are presented on select nights, weather permitting.  Enjoy this comprehensive guide to Disneyland Resort Fireworks and Parades!

Wonderous Journeys
This show, which helps to celebrate the 100th anniversary of the Walt Disney Company features nods to all 60 Walt Disney Animation Studios films to date. It takes Guests on a journey filled with artistry, music, storytelling and heart. The show even features a new song called “It’s Wondrous.”

Mickey’s Mix Magic
Light up the night at this new, high-energy show celebrating Disney’s legendary duo Mickey and Minnie Mouse! With Mickey’s Mix Magic, Guests can enjoy a nightly extravaganza that is bursting with magical song tracks, kaleidoscopic projections and exciting lights and lasers.The scene is set as state-of-the-art projections, lighting and lasers turn Main Street, U.S.A., the water screens on Rivers of America and the façade of “it’s a small world” into dazzling displays of sight, sound and color. Then, on select nights, fireworks will add a pinch more pixie dust to the occasion. Mickey’s Mix Magic is not currently being offered.

“Remember…Dreams Come True” Fireworks Spectacular
Just as Walt Disney’s dreams came true, yours can too. The Dreams Come True show reminds us to never give up and our hopes and dreams. Enjoy as favorite characters from Disney classics make an appearance, along with Tinker Bell and the beloved voices of Julie Andrews and Walt Disney himself. Sing along to all of the songs from your childhood and watch Tinker Bell soar through Disneyland to light up Sleeping Beauty’s Castle. Remember….Dreams Come True is not currently being offered.

Fantasmic!
Fantasmic! uses both pyrotechnics and hydromechanics to create an incredible world of entertainment. Mickey Mouse recreates scenes from Fantasia on the Rivers of America, while overhead big bursts of light and color bring the show full circle! Scenes from classics like The Lion King, Tangled, and Aladdin have recently been added to the Fantasmic! show. Learn more about the Fantasmic! Dinign Package for a top notch evening.

4th of July Fireworks
Like it sounds this fireworks is one for the ages. Every 4th of July Disneyland pays tribute to the great nation by setting off the ultimate fireworks show to the sounds of patriotic music.

“Halloween Screams”
“Halloween Screams” takes place during Halloween Time and features supernatural projection and special effects on most nights of the season. On select nights, the show will be enhanced with the addition of fireworks. This is the first time that this show has been shown for regular park Guests in nearly a decade.

“Believe…In Holiday Magic”
As a special part of the Holidays at Disneyland, the fireworks show is tailored to the spirit of giving. During this time Sleeping Beauty’s castle is lit up with 80,000 lights and covered in icicles while pyrotechnics and holiday tunes play overhead.

New Year’s Eve
What could be better than brining in the new year than bring it in at Disneyland? For one night only immerse yourself in a legendary New Year’s Eve fireworks display.

World of Color – ONE

This all-new nighttime spectacular at Disney California Adventure park celebrates the storytelling legacy started by Walt Disney. This show ties into the Disney 100 Years of Wonder celebration. This will be the first Disneyland Resort nighttime spectacular to feature characters, music and moments from Walt Disney Animation Studios, Pixar Animation Studios, the Avengers and Star Wars in the same show!

Planning a Disneyland Vacation?
For a Free no-obligation quote, contact our sponsor The Magic For Less Travel. Services are provided free of charge and their expert planning advice will help you make the most of your vacation time and money.
Request Your Free Quote Today!

The parades at Disneyland and Disney California Adventure are full of life and entertainment. During the holiday season guests will enjoy specially themed parades, and the rest of the year is non stop fun with your favorite characters strutting through Main Street, U.S.A. Parades are dependent on weather conditions. Character appearances are subject to change.

Mickey leads a cavalcade of fabulous Magic Happens floats, whimsically performers and Disney pals around the park to a high-energy contemporary musical score that puts a spin on classic Disney hits. In addition, a stirring song co-composed by singer-songwriter Todrick Hall is also be present as part of the parade. Floats include Moana in her voyager canoe, Miguel joined by his dog Danté from the film Coco, an the enchanted forest from Frozen 2 as Anna, Elsa, Olaf, Kristoff and Sven pass by. The parade’s grand finale commemorates memorable moments from Disney classics in an incredible procession that’s not to be missed.

Main Street Electrical Parade
It’s back again! In the evening, as lights go down, Guests will be able to hear that iconic musical score as they see a variety of floats featuring beloved Disney characters. These floats are covered with approximately half a million colorful LED twinkling lights. The soundtrack includes the ridiculously catchy tune with its “electro-syntho-magnetic musical sounds.”  This parade ended its most recent run on September 1, 2022. 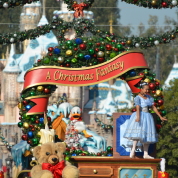 During the holiday season, an additional parade joins the festivities at Disneyland. A Christmas Fantasy Parade have been delighting audiences since 1994 and includes Santa Claus himself. Joining Santa will be Mickey, Minnie, Chip & Dale, Anna & Elsa, and more.

Calling all Ghouls: don’t miss this spirited masquerade cavalcade starring Mickey, Minnie and an entourage of Disney villains. This parade is only offered exclusively at the Oogie Boogie Bash.

There are many great spots to see the fireworks, but the best places are on or near Main Street. Try the “hub” near the castle, the train Station and near the flag pole.

Some of the effects occur on the castle and the Matterhorn, make sure your viewing location has a clear view of these to attractions.

The fireworks are some of the best that Disneyland has every offered. Don’t miss them if they will be shown during your visit.