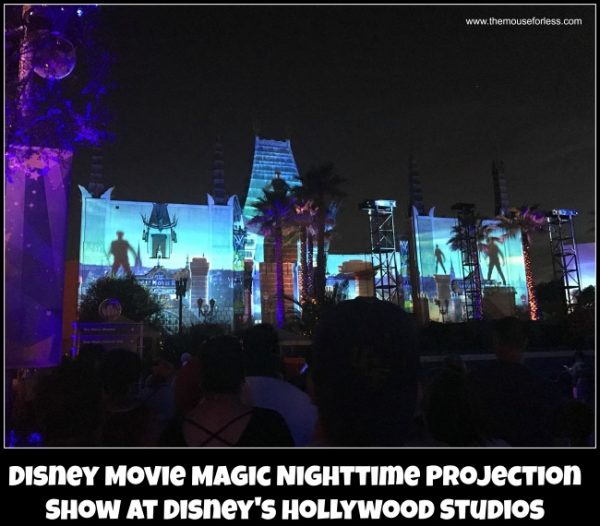 Disney Movie Magic is a 10 minute projection show on the Grauman’s Chinese Theater at Disney’s Hollywood Studios featuring fantastic projection mapping technology along with vibrant lasers. The Disney Movie Magic nighttime show is a tribute to the great live action Disney movies of the past featuring popular movies like Indiana Jones, Pirates of the Caribbean, Mary Poppins, Tron, Guardians of the Galaxy, Beauty and the Beast, and many, many more. Guests are invited to relive their favorite movie moments during the show with the captivating footage of your favorite Disney films.

Disney Movie Magic is typically shown 30 minutes prior to the theme park’s nightly fireworks display, Star Wars: A Galactic Spectacular. The nighttime projection show is short and family friendly making it great for passing the time prior to the fireworks spectacular beginning.

Disney Movie Magic is best viewed from directly in front of the Chinese Theater. A location with a straight-on view of the theater is best found right between the large central stage and the big projection towers that flank Hollywood Boulevard. This viewing location is perfect because the nightly fireworks show is also best seen the same location from right in front of the Chinese Theater. It’s like getting a two-for-one viewing location for nighttime spectaculars! This area also makes for an easy exit from the park straight out the main gates once the nighttime entertainment has ended for the day.