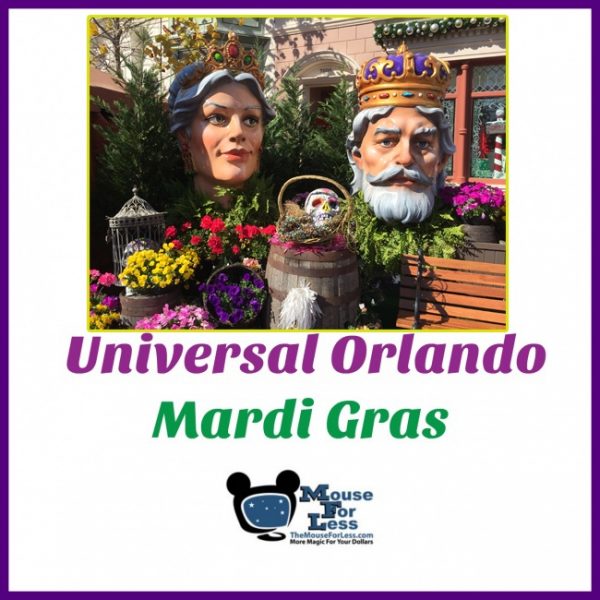 It’s Florida’s Biggest Party — Mardi Gras at Universal Orlando. Each spring, the sights and sounds of Bourbon Street make their way from the bayou to the streets of Universal Studios Florida. With concerts lighting up the stage; 1.8 million beads flying through the air; a wild and wonderful parade led by amazing, outrageous performers — Mardi Gras is a Universal Orlando tradition like no other. Good times and great food are on the menu with boatloads of tasty shrimp, sweet stacks of delicious beignets and so much more!  Universal’s Mardi Gras celebration is the party of the year—and everyone’s invited. Mardi Gras events are included with your Universal Studios theme park admission.

While Mardi Gras normally lasts only two weeks in New Orleans, at Universal Orlando Resort the party will run for two months, on consecutive dazzling nights from early February to mid-April.

Universal Orlando has been creating its special Mardi Gras celebration for years – bringing the perfect combination of the Big Easy and spectacular theme park entertainment to its guests all for the price of regular admission. Nationally renowned musical acts combine with an authentic Mardi Gras parade, dozens of colorfully costumed performers, authentic Cajun cooking, and hand-picked New Orleans bands to capture the look, feel and fun of New Orleans – all inside Universal Studios Florida.

You can’t have a great party without great music. At Universal Orlando’s Mardi Gras you can catch some of the biggest names from the worlds of pop, rock, country, R&B and more, live in concert on the Music Plaza stage in Universal Studios Florida at 8:30 p.m. on select nights. 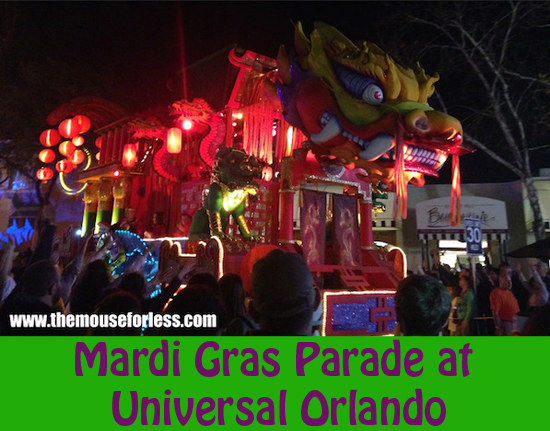 Gather the family and catch beads by the handful as our dazzling parade winds its way through the park with incredible floats, colorful costumes, towering stilt walkers, street performers and dancers. It’s fun and excitement for all ages.

For those with little ones, you can head to the Little Jester’s Parade Viewing Area, which can be found in front of the Brown Derby Hat Shop. The area is available beginning one hour prior to the start of the parade.

Be sure to line the streets to catch beads and doubloons by the handful. There is a different theme for the parade each year. In addition, there are some fan-favorite floats like the Riverboat and King Gator.

Looking for the best spots to watch the parade from? Take a look at the map below: 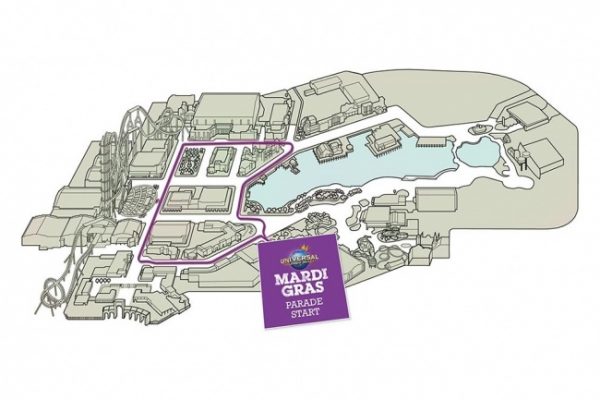 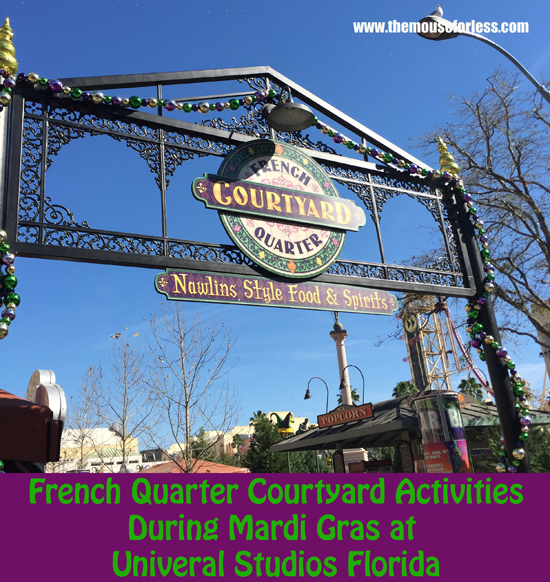 With a rich history of soulful performers, New Orleans is often considered to be the birthplace of true American music. Each Mardi Gras evening you can enjoy the sweet sounds of authentic jazz, blues, and zydeco bands from New Orleans.

The French Quarter Courtyard offers delectable dishes and beverages available for purchase. All food and drinks will be served in tasting sizes. You’ll now be able to enjoy a variety of the New Orleans dishes during your visit. Menu items available for purchase include dishes like shrimp gumbo, jambalaya, beignets, frog legs, crab etouffee, and crawfish! Plus, there will be a signature Mardi Gras cocktail, craft beer and more.

For those who want to try a little bit of everything, consider picking up the Tasting Lanyard. This will be available for special purchase.

There will be a fantastically highly themed shop in the Mardi Gras Tribute Store. Here Guests can peruse, as well as purchase exclusive in-park merch and and participate in photo ops.

After-hours, partygoers 21 and older should head to CityWalk. The New Orleans spirit can be found at Pat O’Brien’s, a replica of the famed French Quarter watering hole. There you can enjoy Hurricanes, eat Cajun favorites in the Main Bar, or join the group sing-along in the Piano Lounge.

CityWalk is open each night until 2:00 a.m. and on event nights, your Annual Pass or Universal Studios theme park ticket allows you to skip the cover at Pat O’Brien’s and all other CityWalk nightclubs.