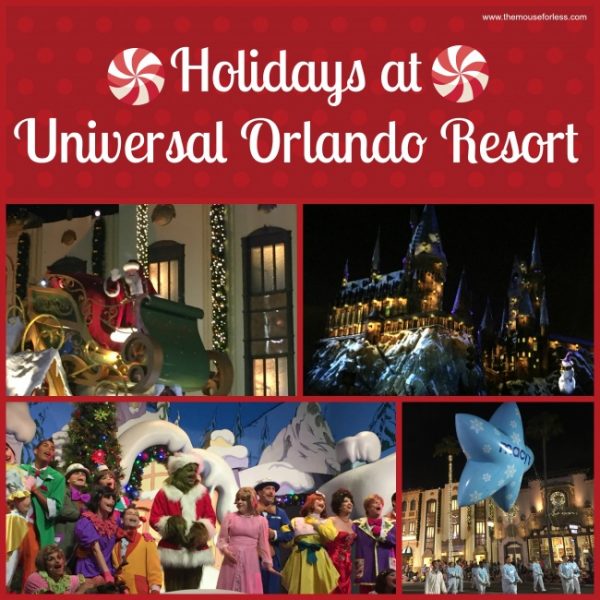 The following is information for the holidays at Universal Orlando Resort for 2019. 2020 information will be added when released.

Guests who visit Diagon Alley in the Wizarding World of Harry Potter will be able to experience the holiday season with beautifully festive decor that surrounds you like ornate garlands that will line the streets. Also Guests will be able to enjoy holiday food taken straight from the stories themselves, and finally take in great live entertainment. King’s Cross Station features buskers singing holiday favorites and Celestina Warbeck and the Banshees have a special show prepared just for the occasion. 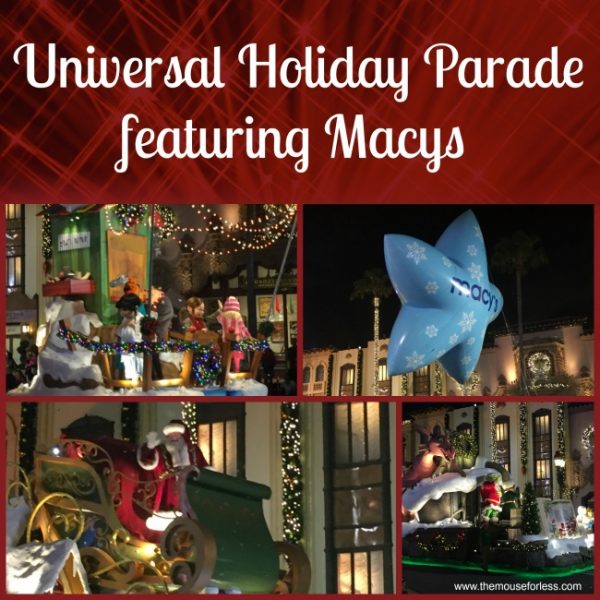 Guests will be able to enjoy the Universal Holiday Parade featuring Macys. The parade stars the Minions, Dreamworks characters (such as characters from Madagascar and Shrek), and of course, Santa Claus. For those of you who enjoy the parade on Thanksgiving Day, you’ll also get a kick out of this parade at Universal because once the legendary Macy’s New York City parade ends, many of its balloons and floats are sent straight to Universal Studios Florida!  Afterwards, enjoy the spectacular tree lighting ceremony and a dazzling display of lights. 16 new balloons will soar above you, 13 of which were exclusively designed by Macy’s. There are also 15 huge floats and each has an astonishing lighting display and unique details to each theme.

Be sure not to miss performances by the legendary Mannheim Steamroller. This fantastic group performs live on select nights during the holidays at the Universal Music Plaza Stage.

At Universal’s Islands of Adventure, the holiday fun doesn’t stop. 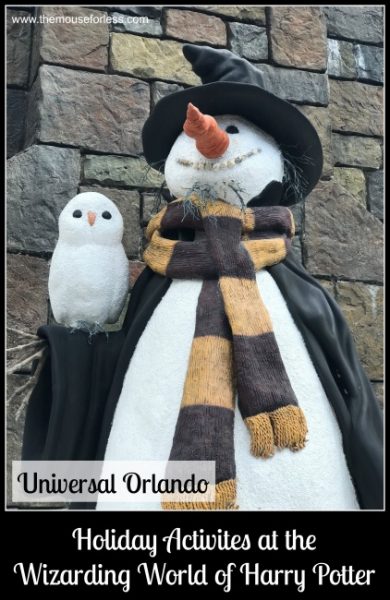 In The Wizarding World of Harry Potter’s Hogemede, Hogsmede will also be fully decorated for the holiday with ornate garlands, the Frog Choir sings seasonal melodies and there are special treats and drinks to share. Then, as evening progresses, Guests will be a see a stunning nighttime experience at Hogwarts Castle that utilizes the latest in map-projection technology. Here, a magical holiday transformation of Hogwarts castle will take place right before guests’ eyes. The display will be themed especially for the season and will feature incredible moments inspired by the films. 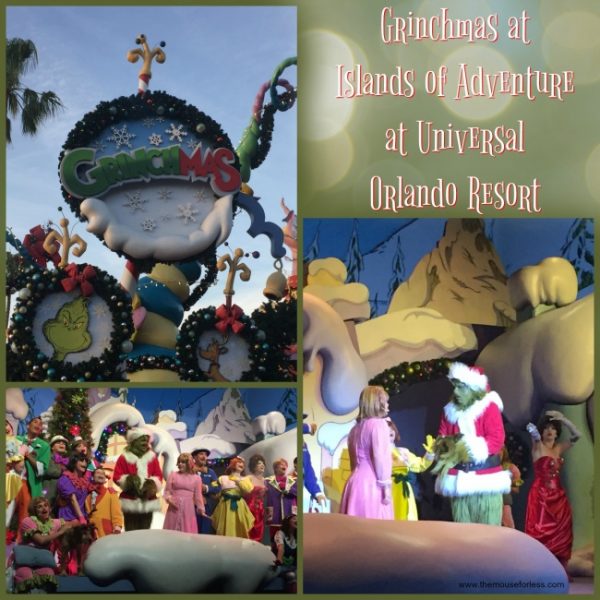 See characters come to brilliant life both onstage and off, as Whos from Who-ville stroll through Seuss Landing, ready to say hello and spread good cheer. This is what the Who’s refer to as Greetings from Who-ville!

Take the opportunity to meet The Grinch! Who wouldn’t want to reminisce about their warmest holiday memories meeting The Grinch? Alright, perhaps “heartwarming” isn’t the right description. Maybe “hilarious,” or “spectacularly sarcastic?” Either way, this is your chance to get the Grinch’s autograph, shake his furry hand, and have your photo taken with the green Christmas thief himself. It’s the perfect memento for those who like to do holidays their own way.

If you want to spend even more time with the Grinch at Universal’s Islands of Adventure, enjoy a delicious breakfast with The Grinch & Friends Character Breakfast!

The Grinch brings his special blend of mischief, turning your morning meal into an animated adventure. After you choose from delectable buffet selections, The Green One himself will make the rounds, stopping at every table to pose for photos.

Universal Studios Florida, Universal’s Islands of Adventure and Universal CityWalk will bring merry & bright delicacies to guests so they can #HolidayLikeThis throughout their epic vacation. Guests will relish the flavors of the season, including:

This year, Universal Orlando will offer an all-new “Sweets & Sounds Dessert Party” experience on select nights starting November 16 through December 15. Guests will have access to exclusive viewing areas for Universal’s Holiday Parade featuring Macy’s and the Mannheim Steamroller concert performance along with all-you-care-to-enjoy seasonal desserts, savory bites, sparkling wine and assorted non-alcoholic beverages. Tickets for adults are $49.99 plus tax, and tickets for children (ages 3 – 9) are $29.99 plus tax. Separate theme park admission is required.

Celebrate the holidays at Universal Orlando Resort! If you want to stay in the middle of the action, stay in the heart of the holidays at one of Universal’s spectacular on-site hotels. From special holiday buffets to visits from Santa and everything in between, there’s something cheerful for everyone to enjoy. Plus, on-site hotel guests enjoy exclusive theme park benefits that are sure to make your visit a merry one.

The Universal Orlando Resort Hotels offer a multitude of dining options to celebrate the Christmas holiday. From buffets to prix fixe dinners, there’s something for everyone to enjoy on both Christmas Eve and Christmas Day. Click here to learn where you can dine at to celebrate.

For guests who are visiting December 22 to December 30, they can enjoy the “Festive Flavors Holiday Buffet” at Universal Studios Florida. This buffet will also provide access to exclusive viewing areas for both Universal’s Holiday Parade featuring Macy’s and Universal Orlando’s Cinematic Celebration. Guests can indulge in all-you-care-to-enjoy Holidays cuisine, specialty desserts and sparkling wine throughout the evening featuring savory and sweet holiday favorites. Tickets for adults are $64.99 plus tax, and tickets for children (ages 3 – 9) are $44.99 plus tax. Separate theme park admission is required.

Come to EVE at Universal Orlando CityWalk, a New Years Eve party you will never forget. Indulge in multiple buffets of exquisite cuisine, signature drinks, and pyrotechnics that will blow you away. This event is strictly for those 21 years of age and older.

In addition, Universal Studios Florida and the Universal Orlando Resort Hotels are offering special celebrations to ring in the New Year!