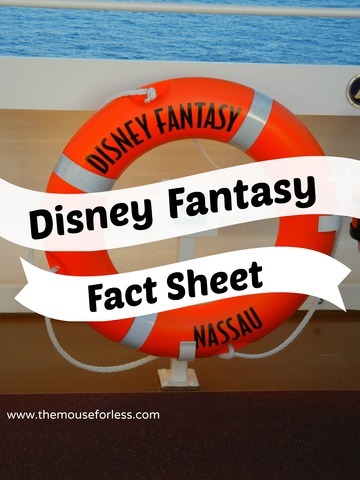 The Disney Fantasy is the fourth ship in the Disney Cruise Line fleet.  With 14 towering decks, the ship has the capacity to accommodate 4,000 passengers. Aboard this majestic sailing vessel, state-of-the-art technology meets early 20th-century design recalling the golden age of cruising in the 1930s. Here, you’ll find the vast array of comforts, outstanding service and timeless beauty of a ship that’s sure to capture your heart and imagination. 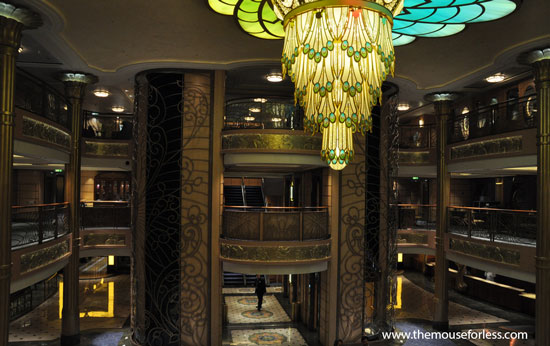 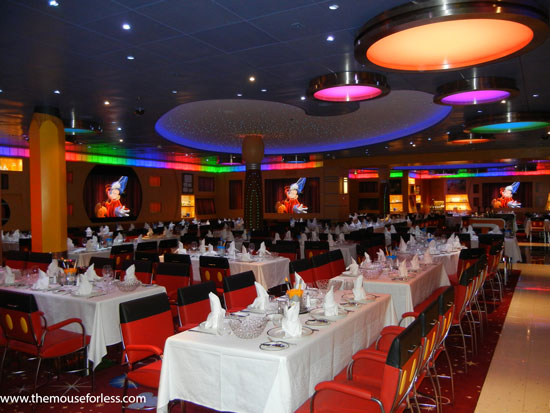 The ship’s horn on the Disney Fantasy is a prominent element of the “Sailing Away” deck party at the start of every cruise and is quite the musical talent. The horns are able to sound the first musical line of “When You Wish Upon a Star” as well as the second line of the song (“makes no difference who you are”) plus, several measures of “Yo Ho (A Pirate’s Life for Me),” “It’s a Small World,” “Be Our Guest,” “Hi Diddle Dee Dee (An Actor’s Life for Me)” and “A Dream is a Wish Your Heart Makes.”

The characters Dumbo and Timothy on the Disney Fantasy’s stern weigh in at more than 2,300 pounds. Dumbo is a little over eight feet long from head to tail with an “ear span” of seven feet. Timothy sits 2’6″ tall on Dumbo’s hat and is holding a paint brush that’s about 3’10″long. Dumbo was sculpted from large foam blocks by Walt Disney Imagineering artists in Glendale, Calif. The sculpted pieces were then shipped to Florida where Disney craftsmen and artists created him in fiberglass and paint over a frame of marine-grade stainless steel. The duo was installed in Papenburg, Germany.

The Art Nouveau-inspired chandelier on the Disney Fantasy cascades downward from a massive, illuminated stained-glass flourish on the ceiling in vibrant hues of greens and blues. The chandelier itself is more than 10 feet in diameter, a one-of-a-kind work of art evoking a peacock in stained glass and more than 60,000 clear Swarovski crystal beads.

Every Disney Cruise Line ship has an atrium lobby statue celebrating a classic Disney character. The Disney Fantasy’s bronze-cast pièce de résistance is Mademoiselle Minnie Mouse, dressed in vintage fashion with a parasol and steamer luggage at her side.

Muppet Pepe the King Prawn, who stars in the ship’s new Midship Detective Agency game, has his very own stateroom on the Disney Fantasy. Located down the hall from the youth clubs, the door to stateroom 5148 ½ is decked out with Pepe’s activity schedule, photos of his Muppet friends and notes from guests. While no one has ever actually seen the Muppet-sized door open, Pepe has not been shy bragging about the space reserved just for him.

Sips, sights and sounds of the diverse cities, countries and cultures of Europe – that’s what’s in store all in one evening and all in one place aboard the Disney Fantasy. The adult nightlife district Europa features five clubs and lounges that treat the senses to a taste of Ireland, England, France and Italy plus stunning skylines and signature cocktails inspired by Russia, Greece, Hungary and Spain.

Guests can celebrate special occasions with a one-of-a-kind toast at nightspots dedicated to “bubbly.” A special Taittinger Nocturne with Jessica Rabbit gracing the bottle is the signature bubbly in Ooh La La, the Disney Fantasy’s Champagne-themed cocktail bar.

Ahoy, mateys! Subtle nautical motif adorns Disney Cruise Line ships, including traditional maritime symbols and lettering that only the conscientious sailor can spot. For example, on the carpet in the Disney Fantasy stateroom corridors, a ship’s wheel encompasses a map of the world and nautical flags spell out the name of the ship.

Don’t worry about getting a chill! The swimming pools on Disney ships are heated when the water temperature drops below 75 degrees. The Disney Fantasy was worth the wait! From cutting the first piece of steel on March 16, 2010, until the Maiden Voyage on March 31, 2012, it was just over two years in the making. That’s 747 days, and to get technical, that’s 17,928 hours.