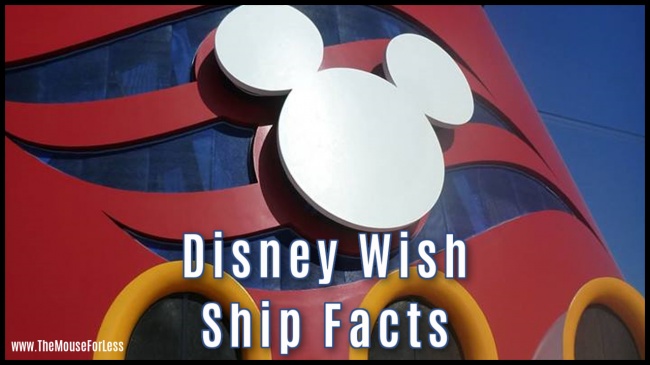 The Disney Wish is the fifth ship in the Disney Cruise Line fleet.  This Triton Class ship has 14 towering decks, the ship has the capacity to accommodate 4,000 passengers. This is the first Disney vessel powered by liquefied natural gas.  The Disney Wish’s environmental footprint is significantly reduced because of this cleaning-burning fuel. On this ship you’ll find the vast array of comforts, outstanding service and timeless beauty of a ship that’s sure to capture your heart and imagination.  Here are some Disney Wish ship facts that you may not know.

Disney ships are the only cruise ships to have four captains – the ship’s captain, Captain Minnie, Captain Hook and Captain Jack Sparrow.  Disney Wish is the first Disney cruise ship to have Minnie as her captain.

The ship’s horn on the Disney Wish is a prominent element of the “Sailing Away” deck party at the start of every cruise and is quite the musical talent. The horns are able to sound the first musical line of “When You Wish Upon a Star” as well as the second line of the song (“makes no difference who you are”) plus, several measures of “Yo Ho (A Pirate’s Life for Me),” “It’s a Small World,” “Be Our Guest,” “Hi Diddle Dee Dee (An Actor’s Life for Me)” and “A Dream is a Wish Your Heart Makes.”

The character on the Disney Wish’s stern is Repunzel.  Every Disney Cruise Line ship has an atrium lobby statue celebrating a classic Disney character. The Disney Wish’s bronze-cast pièce de résistance is Cinderella.

The water coaster on the Disney Wish is a first-ever attraction at sea.  It is 760-feet long and the ride is 2+minutes with water effects, lighting effects with music track and show scenes.  Walt Disney Imagineers elevated the AquaMouse water coaster on the Disney Wish in order to maximize space on the deck. And with the AquaMouse in place, they had room for their imaginations to concoct yet another family activity on the Disney Wish – Toy Story Splash Zone play area for younger kids.  This area have a water slide themed to Toy Story called “Slideasaurus Rex”.