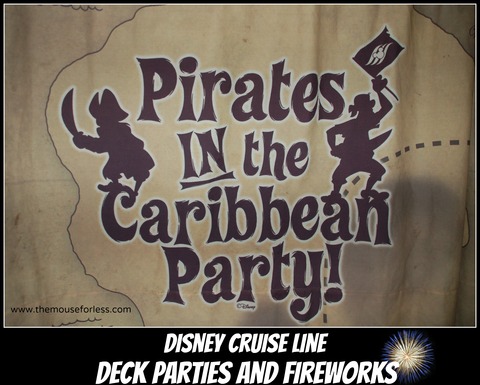 Disney Cruise Line deck parties and fireworks are a great way to increase the excitement of an already anticipated cruise! Each ship in the Disney Cruise Line fleet has at least one party during its voyage. Whether it’s the Sail-Away Celebration, a night with the pirates, or time with Pixar Pals there is a lot of fun for all!

Firework displays are something that Disney does well, whether it be on land or at sea, and Disney Cruise Lines’ fireworks are the first in the world to be offered by a cruise line at sea. Take a look at the various Deck Parties and Fireworks that you could experience on your next cruise.

Join Elsa, Anna and Kristoff along with virtual visits from other Frozen characters up on deck for a really cool party! The evening starts with a Frozen themed dinner offering traditional Nordic dishes. After dinner, move up on deck for dancing and singing to your favorite tunes from Frozen. For non-dancers, Sven is hosting reindeer games on the transformed upper decks. To set the mood for the evening, Elsa has created a winter wonderland with snow covered rocks, giant snowflakes, and icicles. (Disney Magic and Disney Wonder select cruises only.

This summer, for a limited time (June 2019 through August 2019) and again in summer 2020 enjoy a surprise celebration for the world’s most beloved couple. It is Mickey and Minnie’s 90th anniversary and there is much to do in honor of this special occasion. This deck party is filled with music, dancing, and Mickey’s Ice Cream bar. Other perks on board during Mickey and Minnie’s anniversary are stateroom surprises such as party hats, theme chocolates, and more. Also available is specialty 90th Anniversary merchandise exclusively sold on board. Mickey & Minnie’s Surprise Party at Sea is offered only on select Disney Fantasy cruises.

New Year’s Eve aboard a Disney cruise ship is unforgettable. There is something for everyone to enjoy on this evening of festivities. Dancing, music, food, and more are offered at this exclusive party before the fireworks erupt at midnight. There are even special parties for tweens and teens in your family, and the fun keeps going all night.

Pirates IN the Caribbean Deck Party and Fireworks

Enjoy an entire day with touches of a pirate theme culminating in a fantastic deck party and fireworks. For the younger ones, there are activities in the youth clubs to get in the spirit. Families can enjoy a game show in the afternoon to test their pirate knowledge. Pirates have even taken over Bibbidi Bobbidi Boutique and transformed the space into the Pirates League. Guests are transformed into pirates, recite the oath, and officially join Captain Jack’s crew.

Pirate Night officially starts at dinner in the Main Dining restaurants as the servers wear pirate garb and greet guests with an “Ahoy Matey!” or “Arrrr!” and a pirate bandanna at each place. After dinner, head over to the pool deck for entertainment starring your favorite Disney characters decked out in their finest pirate garb. Watch out for the skull-and-crossbones projections because they signal the arrival of Captain Hook, Mr. Smee, and their gang of pirates. Wait to see Mickey and his friends save the day! This party ends with a spectacular fireworks finale. Fireworks weather permitting and not offered on Alaskan cruises.  (All Disney Cruise Line Ships)

Cap off the Marvel Day at Sea with spectacular deck and stage shows, night club activities, and Mickey and the gang dressed as their favorite heroes. Families have a front seat to an epic battle between Marvel Super Heroes and villains on deck in a spectacular stunt show ending with fireworks as only Disney can do them. For those who prefer entertainment inside, Doctor Strange is displaying his powers in the Walt Disney Theater. Adults get the chance to party in the Ravagers Night Club in Fathoms with appearances by Star-Lord and Gamora. Young children and families get to have their own dance party on deck with Mickey, Minnie, Donald, Daisy, Goofy, Pluto and Chip ‘n Dale dressed as their favorite heroes. (Disney Magic select cruises only)

The Pixar Pals Party is available only on Disney Wonder (Alaska Sailings) and takes the place of Pirate Night. Enjoy a dinner with a “Toy Story” theme and party with familiar characters from some of your favorite Disney Pixar films. There will be an opportunity to get autographs and dance and sing with characters like Buzz and Woody. 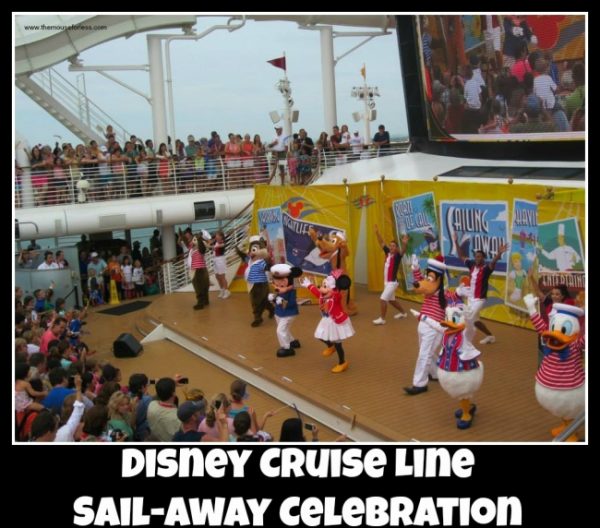 Looking forward to Embarkation Day? There’s something else to be excited about, too — The Sail-Away Celebration! This party ushers in the start of the Disney cruise vacation on Disney Dream and Disney Fantasy. Join the Disney cruise Crew Members and Disney characters for a dance party that is filled with fun music and interactive dance numbers. Now when you sail with Disney Wonder and Disney Magic you can enjoy the Sail-A-Wave Party!…A Bon Voyage Celebration. Essentially this is the same fun jump start to your vacation where you can sing and dance with Mickey and the gang!

On select 7-night Eastern and Western Caribbean cruises with Disney Cruise Line guests can have a galactic themed cruise where there is Jedi Training, famous scene recreations, and an incredible fireworks display to the sound of the Star Wars musical score.  You will also get too see some of your favorite Star Wars characters walking bout the ship.

All Deck Parties and Fireworks on select cruises and subject to change.