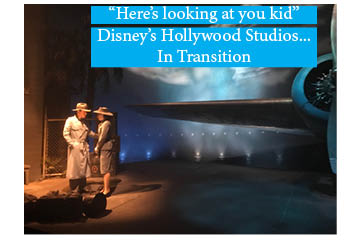 If you are a first-time visitor to Disney’s Hollywood Studios Theme Park at Walt Disney World, you probably will notice the Pardon our Pixie Dust signs.  However, if you are a returning guest, you may find yourself noticing more of what is missing than what is remaining.

Gone are Backlot Tour, The Great Movie Ride, and the iconic New York City set. It is a time of transition at Disney’s Hollywood Studios.

So, What is There to do Still at Disney’s Hollywood Studios?

For starters, Sunset Boulevard is relatively unchanged.  Tower of Terror is still the premier haunted destination at the end of the road, and Rock n’ Roller Coaster is still screaming fun.  Beauty and the Beast: Live on Stage has showings throughout the day, with Fantasmic! capping off the night with their unique water and light show.

The Animation Courtyard still hosts Voyage of The Little Mermaid and Disney Junior – Live on Stage! The courtyard is also home to the Star Wars Launch Bay where Guests can meet their favorite Star Wars characters and more. Other Stars Wars fun throughout the park include: the Star Tours attraction, catching a viewing of Star Wars: Path of the Jedi, or the Jedi Training experience for kids.

Other favorites still available include:  Muppet Vision 3D, Toy Story Mania, and the Indiana Jones Epic Stunt Spectacular.  Guest also have the opportunity to “Let it Go” at the For the First Time in Forever: A Frozen Sing Along Celebration.

Yes, especially for those who have a Jedi in training and love all things Star Wars.  To make a full day of your adventure, plan to eat at one of the full-service restaurants such as: Hollywood and Vine, Mama Melrose, 50’s Prime Time Café, Sci-Fi Dine In Restaurant or The Brown Derby. Make sure to take in all the shows and character meet and greets.  Also, catch a March of the First Order and be awed by the Star Wars: A Galactic Spectacular fireworks show to finish off the night.

And, don’t worry – there are some fantastic things underway at Disney’s Hollywood Studios including: Toy Story Land and Grand Avenue as well as a whole new land – Star Wars: Galaxy’s Edge, set to debut in 2019.

What do you think? Is Disney’s Hollywood Studios still a can’t miss park for you? Or are you spending less time here since it’s under construction? Share your thoughts in the comments.

Teri is owner of Travel Central Florida, a website and blog sharing the many travel adventures of her family in the Central Florida community. As a mom of 2 and frequent traveler to Walt Disney World and Universal Orlando, she is excited to share her adventures and tips to have the most fun at these popular vacation destinations!