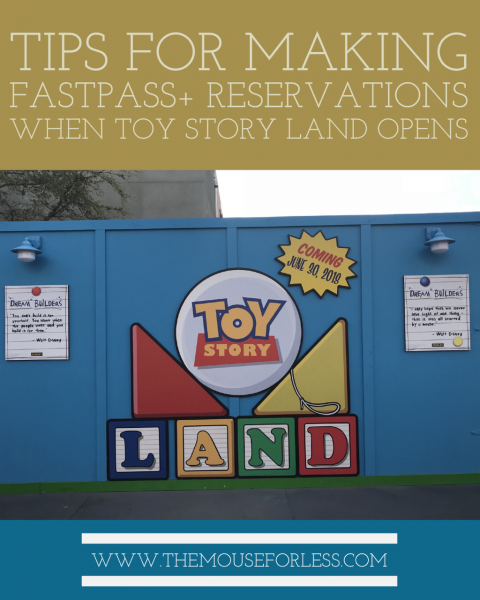 It’s going to be the hot ticket of the summer! Now, Guests who are staying at a Walt Disney World Resort hotel can make FastPass+ reservations for the attractions that will be found in Toy Story Land! Here’s the basics of what you need to know.

Now, let’s get into some strategy moving forward for how to best make your FastPass+ reservations.

If your group wants to experience all that the park has to offer, you will want to make a FastPass+ reservation for one of the new Toy Story Land attractions. Due to the newness, as well as the thrill of Slinky Dog Dash, that will be the hardest FastPass+ reservation to get, followed by Alien Swirling Saucers, and then Toy Story Mania!.

If you choose either Alien Swirling Saucers or Slinky Dog Dash as one of your first FastPass+ reservations, you won’t be able to choose ever-popular Toy Story Mania! until you’ve used your first three FastPss+ reservations.

To save you maximum time waiting in line, prioritize your second and third FastPass+ reservations for either Star Tours – The Adventures Continue, The Twilight Zone Tower of Terror or Rock n’ Roller Coaster. From there, you can start to utilize the fourth rolling FastPass+ option/standby queue for Toy Story Mania and the other Toy Story Land attraction you didn’t initially make your FastPass for.

When visiting Disney’s Hollywood Studios with young children who don’t meet height requirements, Toy Story Midway should be your first priority. After that, however, you have a few choices, mostly involving shows. Some of these decisions will, of course, be made based on the interests of your family, but in general the two shows where you are likely to save the most time by using FastPass+ are Disney Junior – Live on Stage! and For the First Time in Forever – A Frozen Sing-Along Celebration.

While the current total number of attractions at the park might currently seem a little small, this park is a favorite for the thrill seekers. To maximize your time, your should use your reservation from the first group for Slinky Dog Dash instead of Toy Story Midway Mania! However, if you really want to ride both or this attractions, you will likely be able to ride Toy Story Mania! with either the rolling fourth FastPass or by waiting in line.

For your thrill seeking selections from the second tier, the choices should include Rock n’ Roller Coaster, Star Tours – The Adventures Continue or the Twilight Zone Tower of Terror.

Other Things to Keep in Mind

What tips do you have for those who are looking to visit Toy Story Land’s new attractions by using FastPass+? And which attractions will you make reservations for moving forward? Share your thoughts in the comments or on Facebook.