To most guests, Disney character watching is an important part of their Disney vacation. The characters provide a link between the animated films and the theme parks, and meeting them is very similar to a celebrity encounter, a memory to be treasured.

Did you know that, from hundreds of animated-film characters, only about 250 have been brought to life, and only about a fifth of them mix with guests? The others perform in parades and shows in the parks and at some resorts. Characters even appear at Disney’s water parks and sometimes meet with guests at Disney Springs. 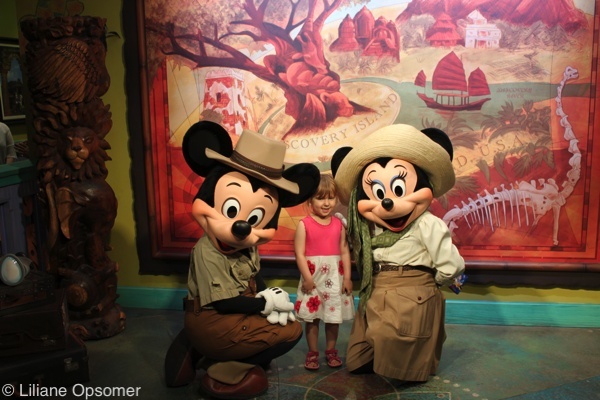 Character meeting can be a wonderful experience for children, but young kids can be intimidated, even terrified, when meeting them for the first time. Many Disney characters are quite large, some like Winnie the Pooh, Tiger, King Louie, Baloo, and Genie are huge! Others such as Maleficent, Cruella De Vil, Jafar, and Lady Tremaine can potentially scare little ones. 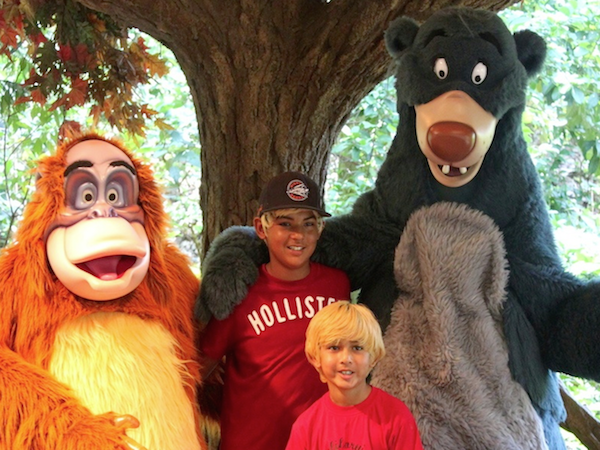 Prepare your children before arriving at the parks. You could visit a ballpark and see how your child reacts to a team’s mascot. Another great way to show young children how the characters appear in the parks is to rent or buy a Disney SingAlong Songs DVDs. These programs show Disney characters interacting with real kids. At a minimum, the videos will give your kids a sense of how big the characters are. You can also watch YouTube videos to get a sense of what to expect.

Don’t thrust your child at the character. If your child is shy or scared, try talking to the character while leaving the young one with another adult to observe the interaction. Face characters, those for whom no mask or headpiece is necessary, are usually less scary. Start with a Tiana, Anna, Elsa, Rapunzel, Mary Poppins, Ariel, Cinderella, Belle, or Snow White meet-and-greet. 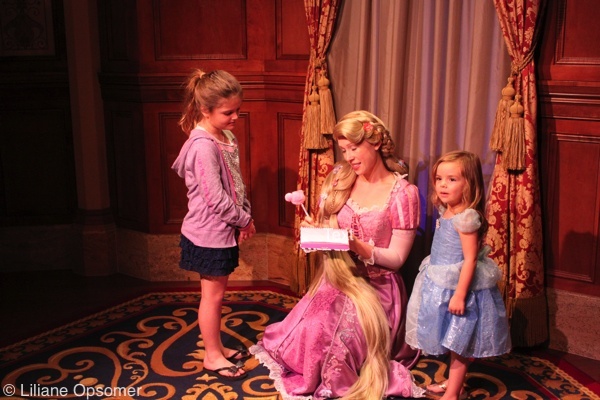 Character Meeting in the Parks

The fabulous five—Mickey, Minnie, Daisy, Goofy, and Pluto—are to be found pretty much in every park. But some characters, such as the Queen of Hearts, the Seven Dwarfs, Jack Skellington, or Captain Hook seldom come out. 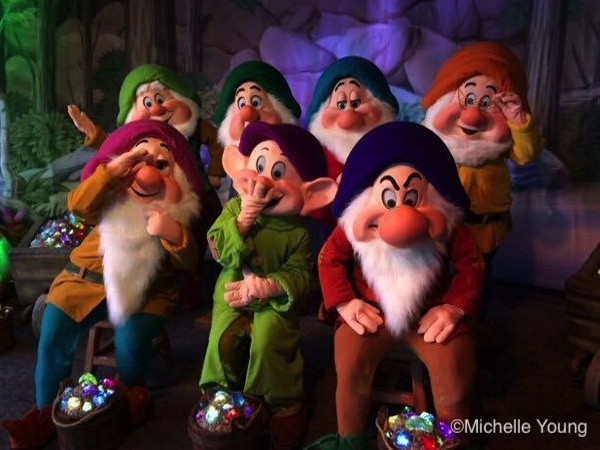 Quite a few appear only in parades, stage shows, or during special ticketed events, such as Mickey’s Not So Scary Halloween Party and Mickey’s Very Merry Christmas Party. During those events, the fabulous five appear in their Halloween costumes and holiday bests respectively. 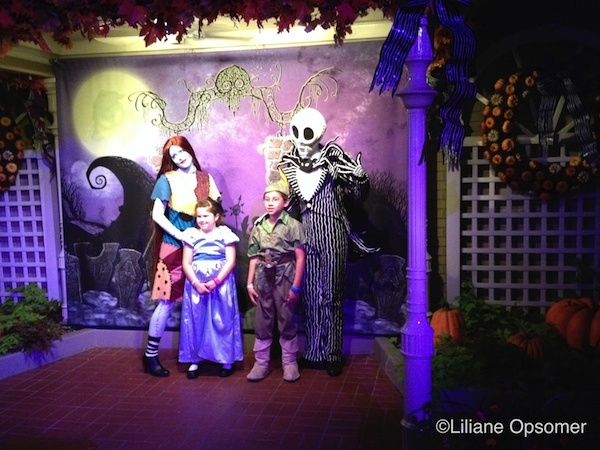 Most Disney royalty can be found at the Magic Kingdom, which is home to Cinderella, Ariel, Belle, Snow White, Merida, Tiana, Rapunzel, and Elena of Avalor. 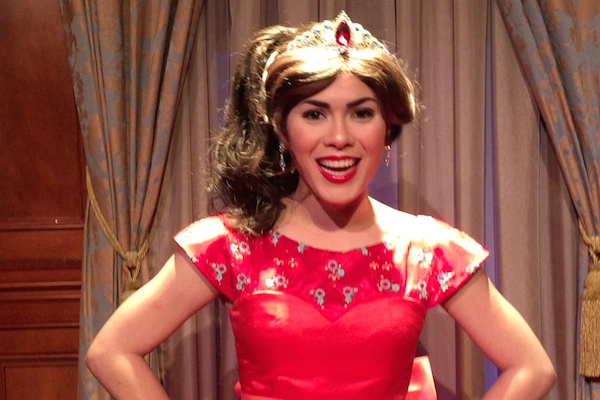 The Norway Pavilion at Epcot is Frozen Central. But Anna and Elsa also appear during the Disney Festival of Fantasy parade at the Magic Kingdom and during the For the First Time in Forever: A Frozen Sing-Along Celebration at Disney’s Hollywood Studios. During the show, they are joined on stage by Kristoff. 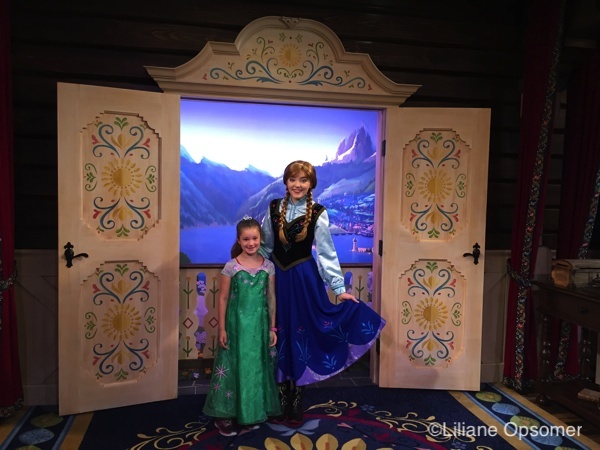 The Studios are also home to an Olaf meet-and-greet. The summer-loving snowman meets his fans inside the Celebrity Spotlight at Echo Lake. From mid-May through mid-August, Olaf and Kristof also meet during the Frozen Games at Disney’s Blizzard Beach water park. 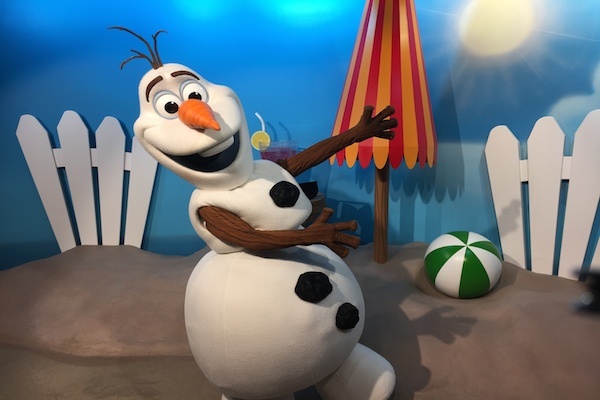 Aladdin and Jasmine meet at the Morocco Pavilion, Mary Poppins and Alice can be found in the United Kingdom, Mulan greets guests at the China Pavilion, Belle’s home is in France, and Snow White meets at the wishing well in Germany. The latest additions to Epcot have been Baymax from the Big Hero 6 movie and Inside Out stars Joy and Sadness. 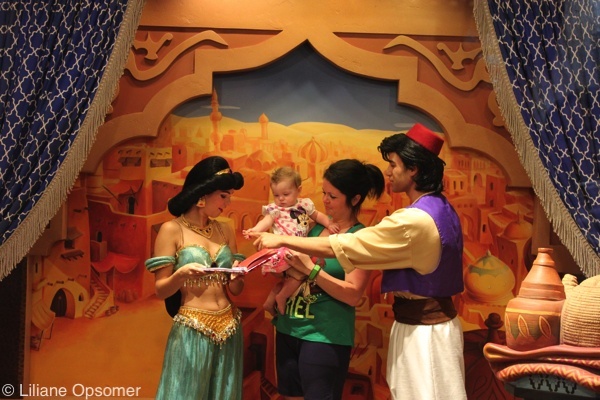 Disney’s Hollywood Studios is the Star Wars characters headquarters. Chewbacca, Kylo Ren, and BB-8 meet guests inside Star Wars Launch Bay, while Stormtroopers (when not busy with the March of the First Order) roam Animation Courtyard. Star Wars character watching takes on a whole different level during the Star Wars: A Galaxy Far, Far Away show, taking place several times at Center Stage in front of the Chinese Theater. It is the largest assembly of Star Wars heroes and villains and is not to be missed. 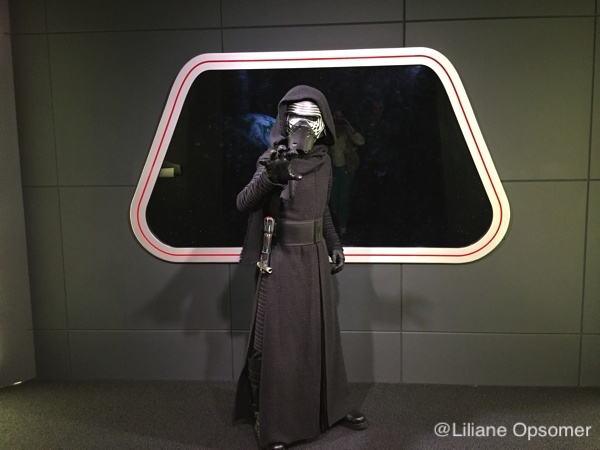 Buzz, Woody, and the Green Army Men can be found at Pixar Place. 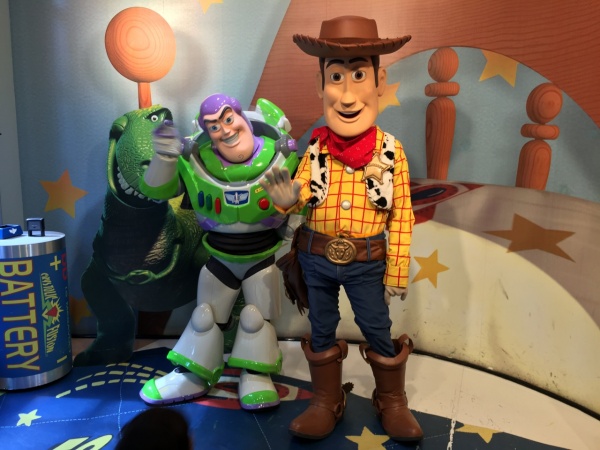 Little tykes will enjoy meeting Disney Channel characters such as Sofia the First, Doc McStuffins, and Jake from Jake and the Never Land Pirates. 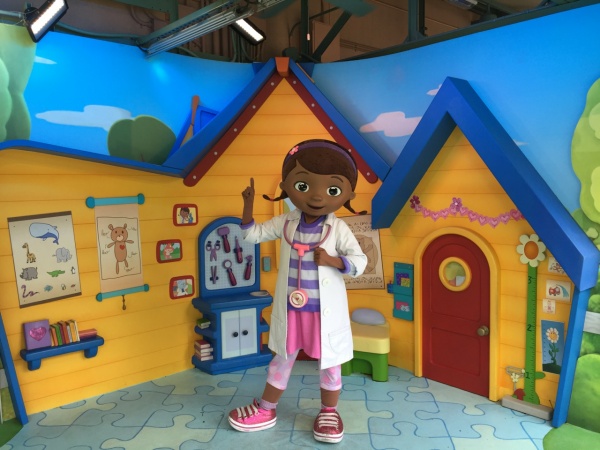 New in 2017 is the meet-and-greet with Star-Lord and Baby Groot. The Guardians of the Galaxy characters appear inside Walt Disney Presents, formally known as One Man’s Dream.

Character meals are bustling affairs held in hotels’ or theme parks’ largest full-service restaurants. During your meal, characters circulate around, and each of the three to five characters present will visit your table, arriving one at a time to interact with your family, pose for photos, and sign autographs. Here are some of our favorites:

At Hollywood & Vine during breakfast, small children can meet Handy Manny, Sofia the First, Doc McStuffins, and Jake from the Disney Channel. During lunch and dinner, Guests can meet Mickey, Minnie, and more dressed in seasonal attire.

The 1900 Park Fare breakfast at the Grand Floridian is visited by Mary Poppins, Alice, Mad Hatter, Pooh, and Tigger. 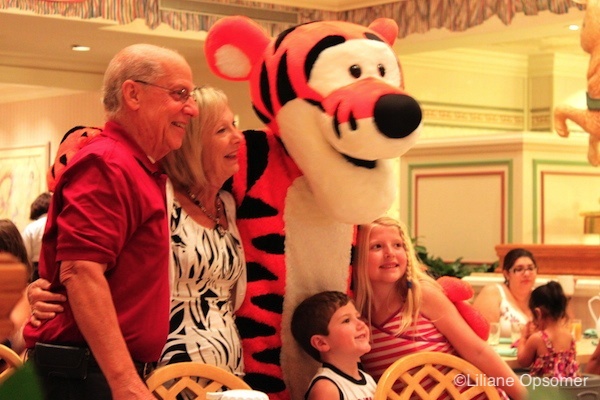 At lunch and dinner, Cinderella, Prince Charming, Lady Tremain, and the two stepsisters provide the most amazing entertainment. 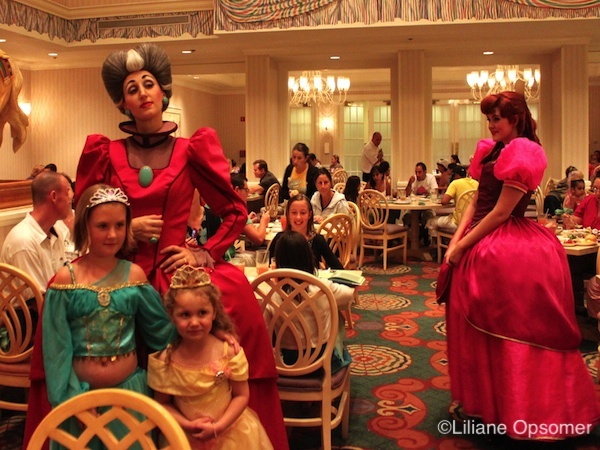 The Crystal Palace at Disney’s Magic Kingdom is great for Winnie the Pooh fans as Pooh, Tigger, Piglet, and Eeyore are the stars here at breakfast, lunch, and dinner. At Tusker House at Disney’s Animal Kingdom you can meet classic characters such as Donald, Mickey, Daisy, Minnie and Goofy for breakfast, lunch, and dinner. The buffet offers a mix of African cuisine and standard American fare. 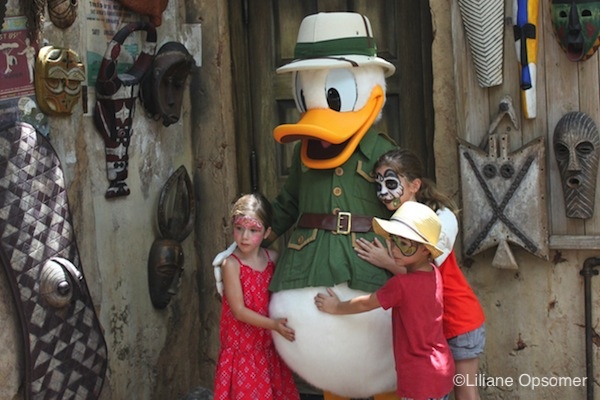 Little princesses will be thrilled at Akerhus Royal Banquet Hall, as four to six characters chosen from Ariel, Belle, Snow White, Aurora, Mary Poppins, and Cinderella visit with guests and take children on a royal promenade through the restaurant. 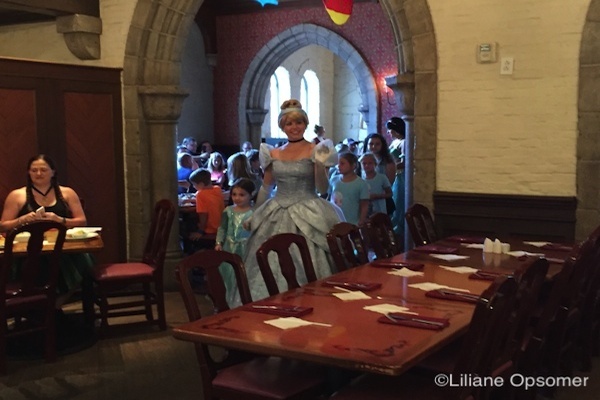 The fabulous five entertains during breakfast, brunch, and dinner at Chef Mickey’s inside Disney’s Contemporary Resort. At Disney’s Polynesian Resort guests can join Lilo and Stitch for a fun character breakfast at ‘Ohana. 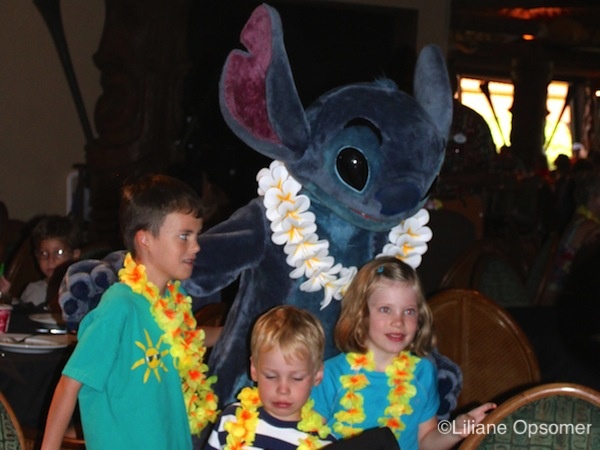 Mickey, Minnie, Chip ’n’ Dale, and Goofy bring lots of fun to diners at Mickey’s Backyard BBQ. The show comes complete with a country band and line dancing and is held at Fort Wilderness Resort & Campground.

New since 2017 is breakfast with Rapunzel, Flynn Rider, Ariel, and Prince Eric at Trattoria Al Forno at Disney’s Boardwalk.

Character Greeting for the Wise

Families once were content to meet a character occasionally. They now pursue them relentlessly, armed with autograph books and cameras. While we love character greeting and love getting our pictures taken with the characters, we do recommend to remember to enjoy your visit and most certainly your meals. Put the camera and autograph book away, and enjoy those precious moments.