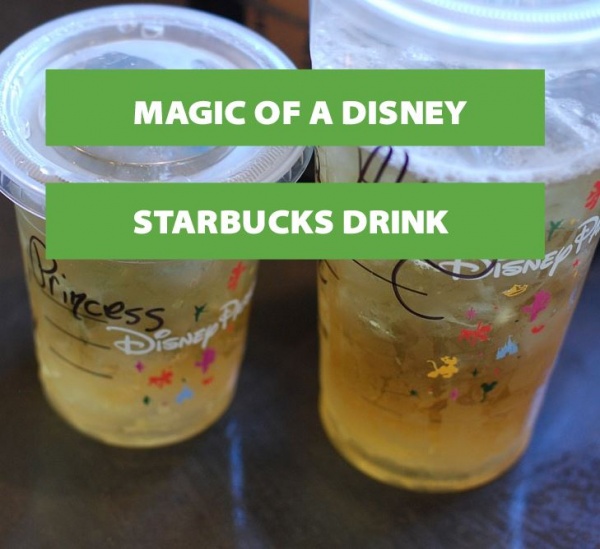 In general, many see Starbucks as a treat in their normal routine.  Be it a daily, must-have stop for you, or a treat for an extra special day.  So, getting a Starbucks drink inside of the Disney theme parks is about as magical as a cup of coffee or tea gets.

My go-to is an iced green tea on Main Street, right before the parade.  You can slide in to the Starbucks right off of Main Street, find a shady spot, and recharge with an iced drink all while watching the parade.

The Disney Starbucks are typically nothing like the locations by your house.  The Cast Members are all in fun uniforms that take you on the bakery’s theme. One big difference to note is that none of the Disney Starbucks have seating in them. If you are on the Disney Dining Plan, you can even use one of your snack credits to redeem a tasty drink or bakery treat inside of the Starbucks.

If you are a collector of all things Disney and all things Starbucks you will find the “You are Here” mugs in the stores and they all have park themes! These are can’t miss for collectors! The bakery also has a fun twist on their normal treats by adding ears to the cupcakes and fun themes to other items!

The thing that stands out the most is that the cups have even been Disney-fied.  You will want to make sure to snap a picture with that iconic Starbucks mug with the castle behind it, due to that extra magical Disney touch!  Plus, having Princess written as your name on your cup will make anyone’s day!

wife. mother, daughter. friend. designer. spin instructor. creator. - I grew up with memorable family vacations to the world along with my Dad coming home from work and surprising us with the newest Disney movie release on VHS! I now am creating what I hope to be lasting Disney memories for my family through travel, crafting and sing alongs in the car.