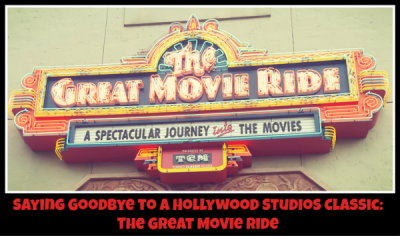 August 12th was a day of goodbyes for me. After spending the morning at Epcot to bid farewell to Ellen’s Energy Adventure, we hopped on a bus to head to Hollywood Studios for one last visit to the Great Movie Ride. This was a bit sad for me because I have been riding the Great Movie Ride on nearly every visit since the year that it opened.

Since its opening in 1989, the Great Movie Ride served as the signature attraction of Disney-MGM Studios.  In 2008, the name of the park was changed to Disney’s Hollywood Studios. The new name didn’t change much for the Great Movie Ride. It still remained, front and center, housed in the replica of the Grauman’s Chinese Theatre. Well, at least until the giant Sorcerer Mickey hat was placed in front of it. Though somewhat hidden by the hat, guests still found their way to the popular attraction.

I was fortunate enough to grab a FastPass for the Great Movie Ride shortly after the closing was announced. As we waited in line, I got a short glimpse of the memorabilia on display and the movie clips that roll in the final room of the queue.  Though we moved quickly on this particular day, I remember standing in long lines in the movie clip area when I was a kid (before FastPass was even a thing). When we reached the end of the queue, a Cast Member directed us to our ride vehicle and we were off for our last ride through the movies.

A Few of My Favorite Scenes from The Great Movie Ride

I enjoyed seeing all of the scenes one last time.  Gene Kelly singing in the rain. Mary Poppins floating above the rooftops with her umbrella. The alien that used to scare me as a child. Tarzan swinging through the trees. Indiana Jones.

There were a few aspects of the Great Movie Ride that made the attraction truly unique.  One was having an actual Cast Member interacting with guests on the ride. Attractions like this have always been a rarity and there are few left. The Land boat ride once featured a Cast Member tour guide, but that went away when Listen to the Land was refurbished and became Living with the Land. The Jungle Cruise is the only one that comes to mind that currently has a live Cast Member guide.

Another unique feature was that during your tour, your ride vehicle was hijacked! Where this happened, however, was not always the same. Sometimes your vehicle was taken over by a surly gangster.  Sometimes, your vehicle would roll through the gangster scene and stop in the cowboy scene. The cowboy scene seemed to be a rare occurrence for me in recent years and I made sure to request it on my final ride. I was not disappointed. I got to experience the shoot out and watch the buildings catch on fire one last time.

Another favorite scene was the Wizard of Oz. As a kid, I remember thinking that the Wicked Witch was still pretty creepy, but thought that it was amazing that she appeared out of nowhere. Singing along with Follow the Yellow Brick Road always gave me that feeling of nostalgia. This movie was seemingly timeless, so even the younger generation could appreciate the tribute. It was the perfect ending to the main part of the ride.

After leaving Oz behind, we traveled into the final room and watched clips from classic movies. I was fortunate enough to have parents who appreciated classic movies. I also took a film class in high school, so I have seen many of the movies that were featured in the finale. When the compilation of movie clips came to an end, our ride vehicle brought us back to where we started. I can honestly say that I was sad to leave.

Time to Say Goodbye to a Classic Attraction

The Great Movie ride got some minor upgrades not that long ago, so the announcement of the closure took me by surprise. I understand it though. The attraction was in desperate need of a major update. The small changes made just weren’t enough. Some of the animatronics and features of the ride had been in a state of disrepair for years. Some for so long, that I questioned my memory of whether they actually worked in the first place.  It’s disappointing that this occurred to the signature attraction of Hollywood Studios. The Great Movie Ride was the attraction that inspired MGM/Hollywood Studios and ultimately the reason the park was created in the first place. It deserved better.

I also think that the interest in some of the movies featured just isn’t there like it once was. I love classic movies, but it seems that some younger guests find them irrelevant. As a result, the Great Movie Ride lost some of its appeal over the years.

It’s no secret that Hollywood Studios is about to change significantly. The Great Movie Ride was the only opening day attraction that remained in the park. Most of the behind the scenes type attractions have disappeared and the working studio elements of the park have ceased to exist. Now that the Great Movie Ride has closed, most of the old Hollywood feel is gone as well. So what comes next in the Chinese Theatre?

Well, Mickey Mouse will finally have his own attraction at Walt Disney World! It seems crazy to me that he doesn’t already, but soon that will change. Mickey and Minnie’s Runaway Railway will find its place at the end of Hollywood Boulevard. We’ve been promised an exciting ride that will delight hidden Mickey fans. I’m not sure what to expect, but I am happy for Mickey.  He certainly deserves his own attraction after all of these years!

The Great Movie Ride was truly an attraction that I will never forget. Saying farewell can be hard, but sometimes it is necessary. I am hopeful that the new attraction will bring me just as much joy as this one did.

If you miss the attraction, make sure to take a ride along with us!

Will you miss the Great Movie Ride? What was your favorite scene? Are you looking forward to Mickey and Minnie’s Runaway Railroad?  Let us know in the comments!