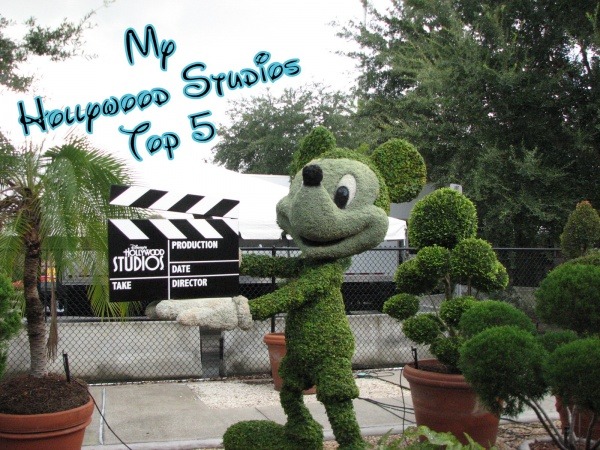 For years, I didn’t have a top five list for Disney’s Hollywood Studios. There just wasn’t enough compelling action at the park for me. The Studio Backlot Tour and Lights, Motors, Action! had both disappeared and left voids before new lands opened.

However, with the addition of Galaxy’s Edge and Toy Story Land, Hollywood Studios has become more than just a half-day filler park for us.

So what exactly makes my Hollywood Studios top five list? Let me run down the list for you!

Woody’s Lunch Box was my number one must-eat spot on my last trip. It was my first visit since Toy Story Land had opened, and I’d heard a lot of great reviews of the food. My daughter and I were lucky to snag a table when we visited. We used mobile ordering so our food was ready as soon as we got there. I had the BBQ brisket melt, which was delicious! The potato barrels were a nice change of pace for a side. The theming of the seating area is almost better than the food. Giant pencils, Tinker Toys and more surround you while you enjoy your yummy food.

Alien Swirling Saucers! My daughter and I rode this because the line was fairly short, and we had time to kill between FastPasses. We didn’t really know what to expect – the ride looked pretty tame as we watched it. However, once we got on and got moving we could NOT stop laughing. It’s not a thrill ride by any means, but we sure had a blast riding it. It certainly doesn’t hurt that the green alien guys are everywhere. They are adorable!

Slinky Dog Dash. This was another looks are deceiving ride for us. Watching from the bridge before we checked in for our FastPass, this coaster did not look fast or thrilling. Once again, the reality far exceeded our expectations for this ride. It isn’t super fast, but it IS super fun. There are enough twists and turns and hills to keep you on the edge of your seat.

This one is a tie, but both are nostalgia driven winners for me. Toy Story Mania has been a favorite of mine since it opened. It’s fast and furious and fun. I usually end the ride with an arm crap from firing at the targets. I’m just a tad competitive, so I’m always trying to beat whichever family member I’m riding with. However, Millennium Falcon: Smuggler’s Run also hits some major nostalgic chords for me. I grew up watching Star Wars in the theater and stepping on board the fastest hunk of junk in the galaxy was a pretty awe-inspiring moment for me. The ride itself is also super fun. Sorry, I just can’t decide between the two which one I love more.

It’s not new, but my number one favorite in Hollywood Studios is no mystery to anyone who has been to Walt Disney World with me. Rock ‘n’ Roller Coaster starring Aerosmith is my tops. Fast thrills, great tunes – what more could you ask for? On top of the ride itself, I love some of the new touches they have added since Disney implemented Magic Bands. It was pretty cool to see my name on a concert poster while waiting to ride.

Ok, that’s my Disney’s Hollywood Studios top five list. I’m not sure the top spot will ever change, but things could mix up a little as I get to experience other new attractions such as Rise of the Resistance and Mickey and Minnie’s Runway Railroad.