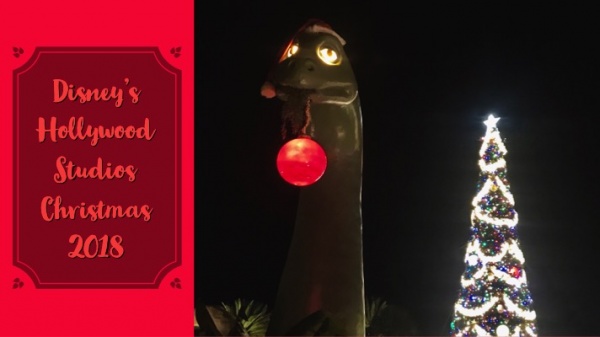 The Walt Disney World fan community has been mourning the loss of the Osborne Family Spectacle of Dancing Lights since they closed January 6, 2016. While nothing will ever replace this display, Disney’s Hollywood Studios is trying to keep the Christmas Spirit alive through out the park.

Disney’s Hollywood Studios sticks to a 1950’s kitsch theme that fits the overall feel of old time Hollywood. I felt like I was hanging out at my Grandma’s house for Christmas. As I walked down Hollywood Boulevard surveying the sights, I was brought back to my childhood, hanging out in my Grandma’s living room, surrounded by family and taking turns opening presents around the tree. 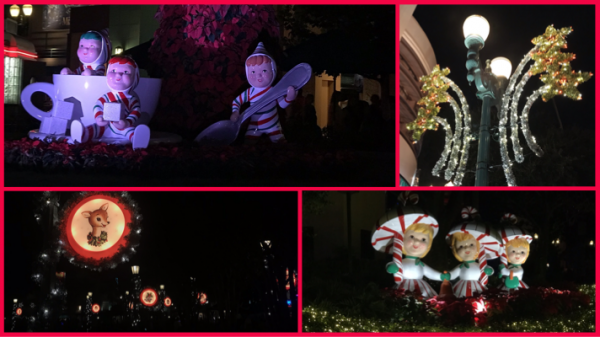 When you turn left towards Echo Lake, a giant, beautifully lit tree looms over the water. With huge ornaments floating around the lake, even Gertie the dinosaur gets into the holiday spirit with a Santa hat. 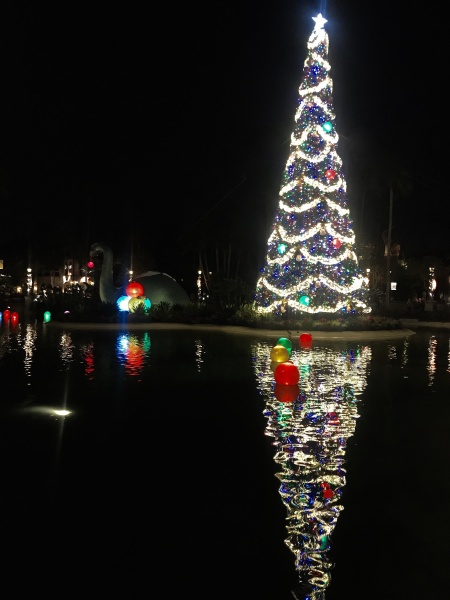 This is the first Christmas season since Toy Story Land opened. The land always has big Christmas lights strung throughout on a daily basis, but for the season, small holiday touches have been added. The Woody and Rex statues have some winter flare, Woody’s Lunch Box is strung with a popcorn garland, a large Hamm sugar cookie is held up by an army man, and oversized ornaments with the aliens’ faces can be found near Alien Swirling Saucers. 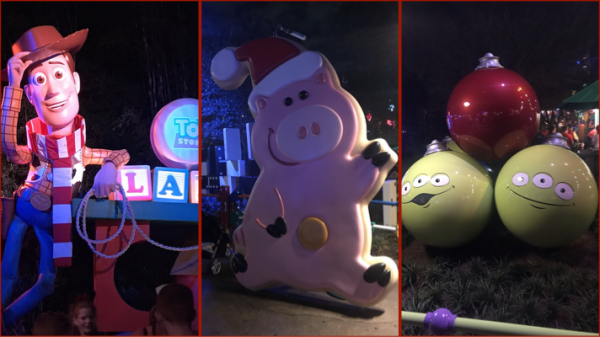 While checking out Toy Story Land you might hear some jingles coming from Slinky Dog as he dashes around his Slinky Dog Dash track. Rex, Jessie and Slinky’s narration of the ride also includes some holiday theming. 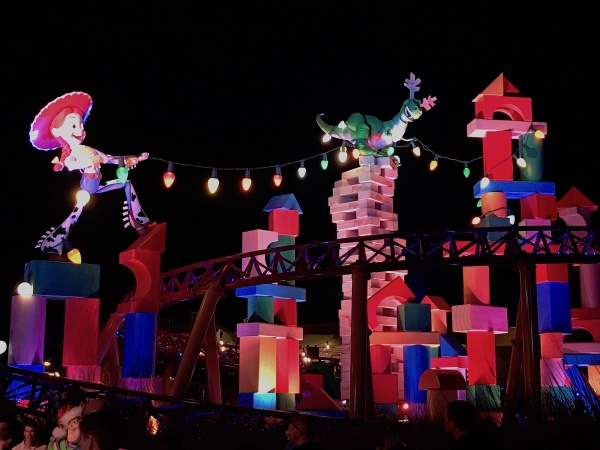 Alien Swirling Saucers is celebrating the Christmas season with several holiday songs playing in-between the normal attraction music. These songs fit in so well with the other music that I almost didn’t notice until I realized I was singing along. At night, you will notice red and green lighting alongside the Christmas songs.

Olaf joins the cast of the For the First Time in Forever: A Frozen Sing-Along show just like last year. Olaf is always a great addition to any show! Don’t forget to meet him over at the Celebrity Spotlight, where he is always celebrating Summer.

Many characters all around the park are ready to celebrate Christmas. From the green army men in Toy Story Land to Chip and Dale in Commissary Lane, most of the characters have some sort of winter gear. You can meet Santa at Once Upon a Toy through December 24th. Once he returns to the North Pole, Santa Goofy will take his place until December 31st. 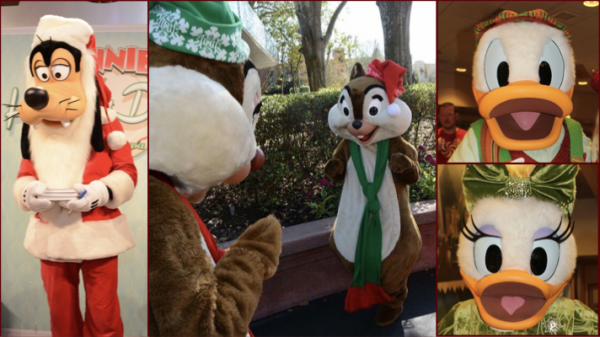 Pretty much every quick service location has some sort of special food or beverage for the holiday season. From shortbread cookies to Olaf cupcakes to a chocolate chestnut cone the holiday sweets abound! There is also a plethora of holiday beverage offerings. With Winterberry margaritas, a Gumdrop cocktail, and hot chocolate flight there is something for everyone. This Disney Parks Blog has a listing of offerings and locations.

I wanted to try everything while I was visiting, but sadly only had time for the Holiday Cinnamon Cran-Apple Lunch Box Tart (yes that is that actual name…) in Toy Story Land. This goodie was yummy and filling. It wasn’t too sweet and was a nice snack to have while enjoying the sights and sounds of Woody’s Lunch Box. 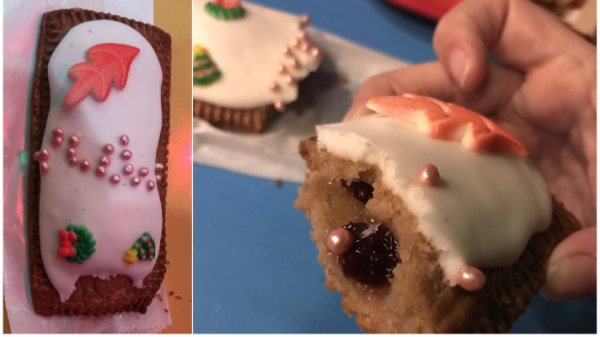 Hollywood Studios has multiple projection shows on the Hollywood Tower Hotel (Tower of Terror) from sundown to park close known at Sunset Seasons Greetings. The projections are short shows that happen fairly continuously through out the night with different themes. From Mickey and Minnie, to Toy Story, to Muppets, and Frozen, these little shows change the Tower Hotel into themed buildings. Lasers, music and snow fall accompany each show. They are fun shows to stop and watch or even have a PhotoPass photographer get your picture. 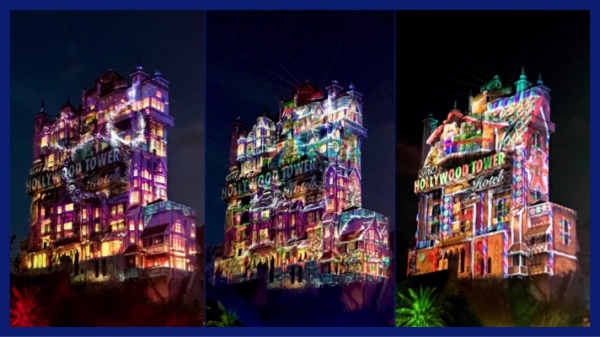 Jingle Bell, Jingle BAM! is a fun show for the Christmas season at Disney’s Hollywood Studios. This holiday show happens on and around the Chinese Theater and is based on the holiday TV special Prep and Landing. Scenes are projected on the theater with lasers, fireworks and snow adding to the wonder of the show. 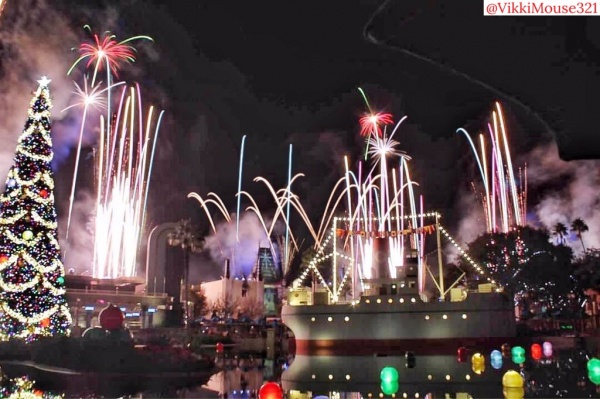 Disney’s Hollywood Studios is doing a great job of bringing the magic of the holiday season alive in the parks. It’s a great place to visit during the Christmas season and is at it’s best during the night-time hours.