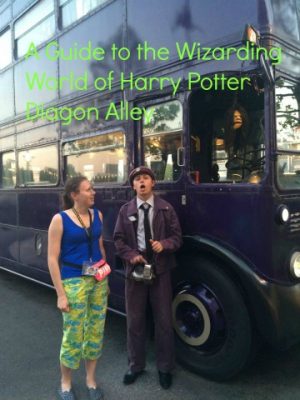 Last week, I wrote about what you could experience while visiting the Wizarding World of Harry Potter – Hogsmeade, but did you know that Universal Orlando has a unique second experience in the Wizarding World of Harry Potter – Diagon Alley located at Universal Studios Florida. Like in the books it is set in London and yes, it’s hidden to the everyday passerby.

Before you actually enter Diagon Alley

Be sure to check out all the parts of London along the waterfront. This includes Sirius Black’s place Grimmauld Place where you can see Kreacher peer out from the window. Stop and talk to the Knight Bus driver and shrunken head (as I did above) and notice that Kings Cross Station looks almost exactly like the real deal in London.

Rides in The Wizarding World of Harry Potter – Diagon Alley

While Diagon Alley is full of detail, the only ride is in Gringotts Bank. Harry Potter and the Escape from Gringotts is a simulated roller coaster. It’s a bit of a unique experience, because the coaster portion does not contain that many real world drops, but the screen and simulator elements make it a rather intense ride. Please be aware the ride does contain snakes and dragons (if those frighten you). Much like the rides at Hogsmeade, it is worth going through the queue even if you don’t intend to ride.

Details not to miss in Diagon Alley 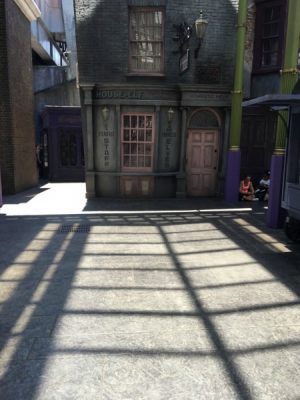 Even though there is only one ride, there are plenty of details not to miss. In no particular order, these include:

The main dining option is the Leaky Cauldron. It is technically counter service, but operates similarly to Be Our Guest. Using an RFID candlestick the staff will deliver your order to your table. It serves both a breakfast menu and a lunch/dinner music. The Mouse for Less has the menu available to check before you go.

Florean Fortescue’s Ice Cream receives rave reviews for it’s creative flavors. (Due to allergies, I haven’t tried it myself.)

There are also several unique snacks and drinks. Like Hogsmeade, due to the contract with J.K. Rowling “normal” theme park snacks like popcorn and Coca-cola are not available in the Wizarding World.

A closing note on the Wizarding World of Harry Potter

Diagon Alley like Hogsmeade makes you feel like you’ve stepped out of Florida into a different world. It’s certainly a must do for any Harry Potter fan. If you want to take the Hogwarts Express and see both parts of the Wizarding World, you will need a park-to-park ticket.

Have you visited The Wizarding World of Harry Potter – Diagon Alley yet? What were some of your favorite aspects? Share them in the comments.