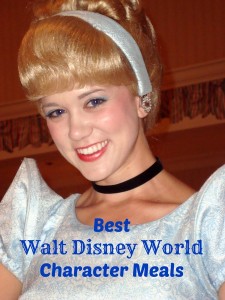 Character meals are such an important part of many people’s Disney vacations.  For many, it’s a no fuss way to meet some of your favorite characters, all at once, with the added bonuses of a) not having to wait in line and b) getting to multi-task by eating too!

Character meals are for everyone!  I know myself, as someone who doesn’t have kids, how awkward it can be sometimes dining without kids as characters come up to you.  Especially when it’s two adults, sometimes I’ve noticed that the characters don’t always know how you’re going to react and if you want them to stop by.

Here’s my best advice when it comes to character meals:  no matter if you’re with your whole family or it’s just you, be excited these characters are meeting with you.  Ask them questions!  Engage with them.  Give them hugs!  It will really help to enhance the experience.  Granted it’s a little easier to do that when you’re meeting with a face character (one who can talk).  But you can still have entertaining “conversations” when meeting with a fur character. (One who unfortunately cannot use words to talk.) I know I’ve had some unique experiences with both!

Of course, if you’re just there for a photo and an autograph, they will much oblige that too.  (PS:  don’t just take photos of your family posing with the character.  Some of the best images I have are candid photos of my family interacting with characters!  This goes for regular meet and greets too…just a tip!)

So, today, I thought I’d take a look at my top five best character meals at Walt Disney World!

Of course, there are a few additional character meals that didn’t make my top 5.  They are:

If you want to see the menus of any of these restaurants, make sure to check out here: https://www.themouseforless.com/walt-disney-world/dining/menus/#Epcot2

As you can see, Disney has some fantastic character meal options that fit all palates and give guests the opportunity to meet just about anyone they would want to meet.  Which one would you want to dine in today?