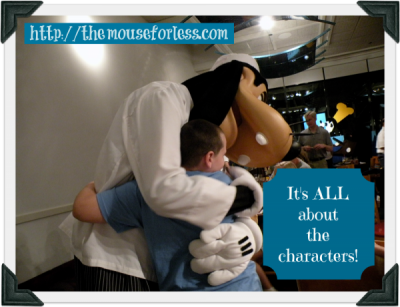 That’s my son up there giving Goofy a hug at Chef Mickey’s.  It was the kids’ first trip to Walt Disney World; although, they had been to Disneyland many times.  It was our first night there, and both kids were so excited to have some personal time with the characters! 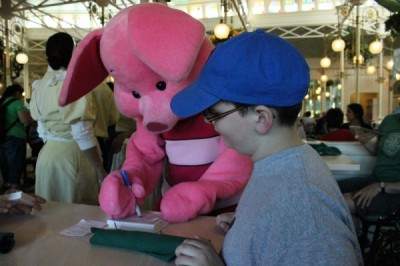 One of the hard things for kids to remember is that while the character meals have a “normal” line-up of characters, not all characters are guaranteed to appear.  It’s a good idea to let your child know before going in that even though his favorite character is normally there, that character may be on a break or be needed in another place at that time. 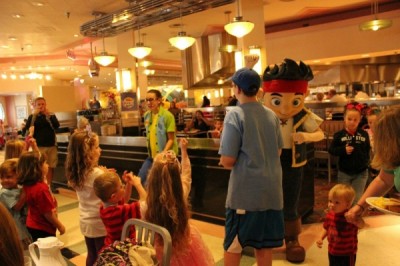 Another fun thing about character meals is the activities or additional opportunities for the kids to interact with the characters, and that provides another chance for making memories.  I remember the first time we took the kids to Goofy’s Kitchen in Disneyland, and the kids got to dance the Macarena with Goofy.  Such a great memory watching the kids trying to keep up with the motions. 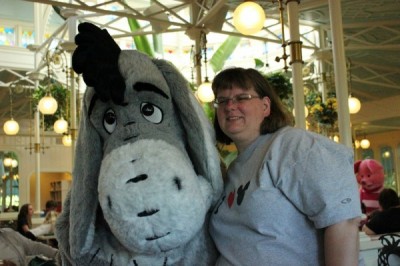 During our last trip, my daughter decided that I needed to get some character interaction, too.  No, character meals really aren’t just for kids.  Several of us adults like to see the Disney characters, too.  However, if you would like to eat without the characters stopping by your table, all you have to do is let them know.

So, let’s talk a little about the food…  Many but not all of the character meals are buffet or all-you-care-to-eat family-style.  If you have picky eaters or very hungry eaters, the buffets can be a good deal as far as Disney meals go.  Like most meals, some of the character meals are better than others.  While I’m not a big fan of the food at Cinderella’s Royal Table, it is definitely the atmosphere that makes this meal a popular draw.  I was trying to come up with my favorite character meal for food to share with you, but I got stumped when I weeded it down to three.  So, I guess I will have to share my top three favorites for food.

If you would like to find more information on the different character meals available at Walt Disney World, please check out our character meal page!