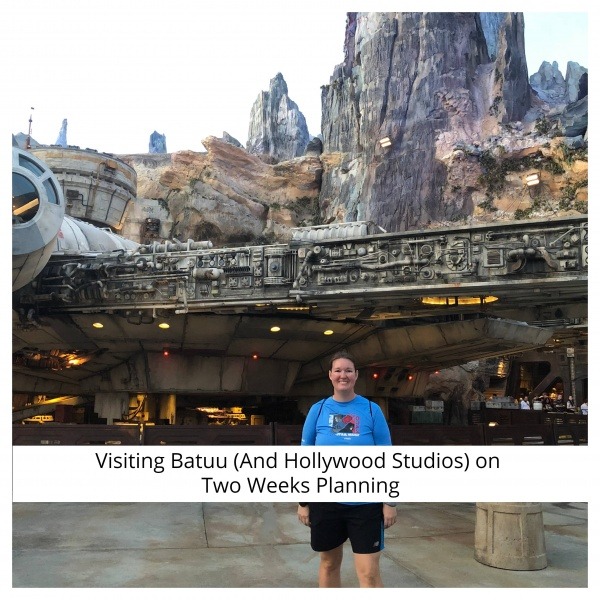 After the Orlando Airport closures were announced due to Hurricane Dorian, I moved my trip two weeks later into September.  This meant that all of my carefully picked FastPasses were gone, but since my main goal was to visit Galaxy’s Edge and ride Millennium Falcon: Smuggler’s Run as many times as possible.  Thanks to some Disney Magic, and lots of time on hold, I was able to move my hotel reservation and still visit Batuu.

I arrived at the resort bus stop at 5:00 AM on Saturday morning, intending to be on the first bus to Hollywood Studios- and I was.  At approximately 5:15, we walked through security at Hollywood Studios, where afterwards Guests waited on Hollywood Boulevard until 6AM when Cast Members, led by a contingent of Stormtroopers, walked us slowly back to Star Wars: Galaxy Edge.

Once there, I was one of the first people on the ride for the day.  Even though I was a single rider, I went through the regular line for my first ride, all so I could see Hondo.  After this ride, I had the opportunity to ride utilizing the single rider line three more times before wandering off to see other parts of Batuu.  I purchased both the green and blue milk, the special popcorn mix, and the Ronto Wrap as I wandered the streets of Batuu.

Both of the milk were okay as I never really loved or hated either one.  The Ronto Wrap was also good, but in my opinion overpriced considering that there are no sides that come with it.  But the popcorn (or popped kernels as the citizens of Batuu call it), was quite good.  I would describe it as a mix of caramel corn and kettle corn- and yes, it is purple and red.

Two days in a row, I was able to utilize the Extra Extra Magic Hours to be at Disney’s Hollywood Studios at the start of the day at 6AM.  During this time, I was able to ride the Millennium Falcon: Smuggler’s Run multiple times using the single rider line, explore Batuu, and get in rides on Toy Story Midway Mania and Slinky Dog Dash.  I could have also visited additional attractions, such as Tower of Terror and Rockin’ Roller Coaster- but as someone who gets motion sick easily, I don’t always do these rides.  It also of note that some carefully placed air conditioning vents on Smuggler’s Run in the handle of the seat in front of you help with motion sickness.  I get motion sick on Star Tours after just one ride, and never experienced any problems on the Falcon- even with repeated rides.

If you are someone who is willing to get up early and you are staying at a hotel where you can utilize these Extra Extra Magic Hours while they are being offered – do it!  Wait times will never be lower, and the land will never be less crowded.

Overall, I would highly recommend that if you can take a trip on short notice, that you take advantage of the opportunity to be at Disney World- as any day at Disney is better than a day anywhere else.