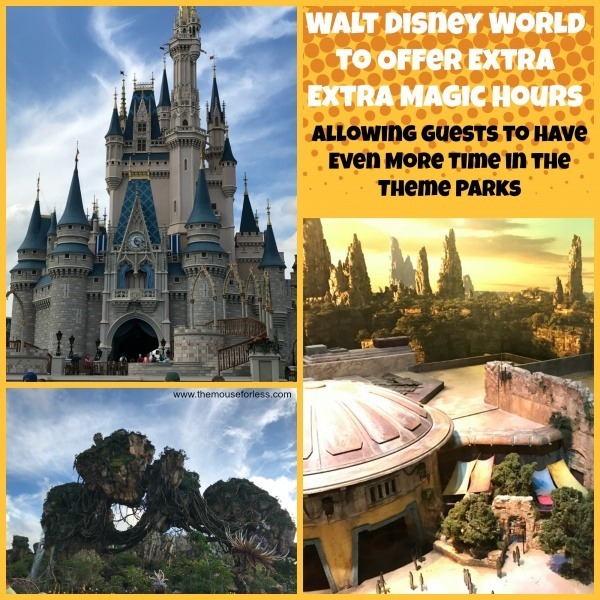 We all know that when Star Wars: Galaxy’s Edge officially opens at Walt Disney World, the resort is expected to experience unprecedented crowds. To help mitigate some of these extra crowds, that old adage, the early bird gets the worm will be extremely applicable. Why? Because Disney is introducing something called Extra, Extra Magic Hours. These are something a little different from Extra Magic Hours. So, just what are Extra Magic Hours?

Extra Magic Hours allow Guests who are staying at select Walt Disney World Resort hotels, as well as other select hotels that are included in these special offerings (including the Walt Disney World Swan Hotel, Walt Disney World Dolphin Hotel, Shades of Green Resort, Disney Springs Resort Area Hotels, Four Seasons Resort Orlando, Hilton Orlando Bonnet Creek and Waldorf Astoria Orlando) have the opportunity to visit at least one of the four theme parks in the morning one hour before the park opens or in the evening two hours after the park closes to day Guests.

The following will be the new schedule beginning August 29:

Attractions that are included in this extra time at the parks can be found here.

A few things to keep in mind for those wishing to take advantage of the Extra, Extra Magic Hours. They will require a valid theme park admission and hotel ID. Guests without the Park Hopper Option or Park Hopper Plus Option must spend the day at the same park where they be using these extra hours that morning. Also, keep in mind that FastPass+ is not included during this time in the park.

If you are looking to get on the Star Wars: Galaxy’s Edge attractions, for the time being, using this extra time is going to be the best way to do so, with the shortest wait possible. Especially if you are planning on being at the park for the 6:00 a.m. opening. Not many people will be willing to sacrifice sleep to make it there that early, so if you can utilize that first hour, I would absolutely do so. As the day builds to the official park opening, the crowds will continue to swell, building to it’s peak by late morning/early afternoon, once all the regular day Guests start mixing in with the Guests who arrived early to take advantage of this awesome select hotel perk.

In addition, this extra time at the other parks will be extremely helpful for Guests who are willing to get up early. The early hours are being introduced across the resort to help deal with the heightened crowds that are expected to impact the resort overall once Star Wars: Galaxy’s Edge does open.

Will you be taking part in these extra early morning hours at the parks? Let us know your thoughts about utilizing these in the comments below or on Facebook or Twitter!