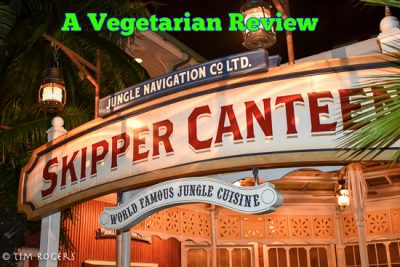 As someone who is fortunate to be able to travel fairly often to Walt Disney World, I have the opportunity to catch things I have missed, try new and exciting additions, and more. However, I generally do the exact opposite and just go back to my old favorites time and time again (see my collection of reviews of the Crystal Palace for an example).

As such, I have tried, especially recently, to make sure I am trying new things every trip, and not putting off things to “catch next time.” One of the first manifestations of that on my most recent trip was to finally check out the Skipper Canteen. 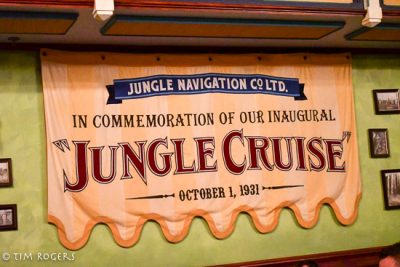 Officially called the “Jungle Navigation Company LTD. Skipper Canteen” this Adventureland based table service restaurant opened in December 2015. It is closely themed to the nearby Jungle Cruise ride in decoration, atmosphere, and menu selection (the dishes are based off the geographic regions of the rivers in the Jungle). 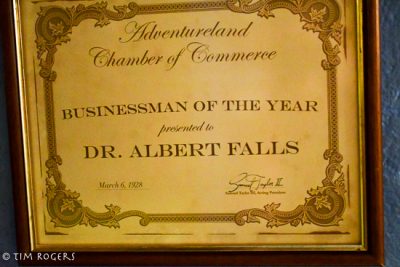 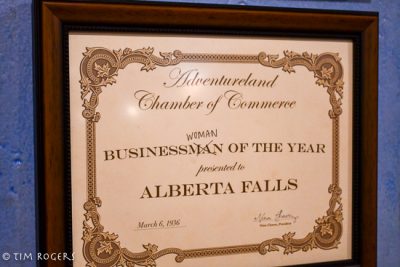 The appeal of this restaurant is two-fold – first, the uniqueness of the food options, especially in the Magic Kingdom, brings some welcome culinary diversity, and second, it is full of Disney spirit for the fans of the Disney parks and their history (more on that later). 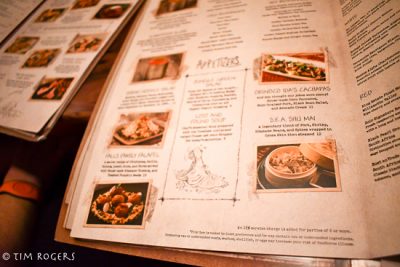 When we came in we were greeted by our server, Robert, who started by giving us an overview of the menu (“this is the top, this is the bottom, this is the left, this is the right”). As you can tell, this restaurant channels the spirit of the Jungle Cruise. The banter with our waiter lasted throughout the whole evening (as one other example when we needed refills we were given the “backside of water”), and was funny for those loving horrible puns.

However, Robert was also incredibly knowledgeable and helpful for our group. My wife and I are vegetarians, so when we asked about options he was able to go through every item on the menu, tell whether it was vegetarian, and also how several could be modified to make them vegetarian. Disney itself is usually great at food accommodations, but having a waiter who is ready and willing to help bumped this experience up. 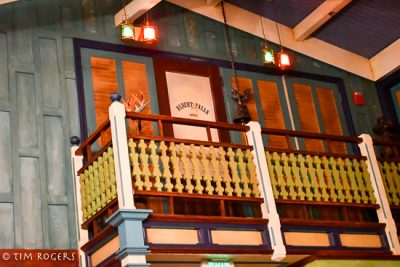 During our meal, Robert also noticed that I was going around and taking some pictures of the decorations and asked if we were “Disney people,” as in people who like the history and background of the parks. When I answered yes, he explained that he was one of the original servers from when the restaurant opened and talked about a lot of the history and little touches. 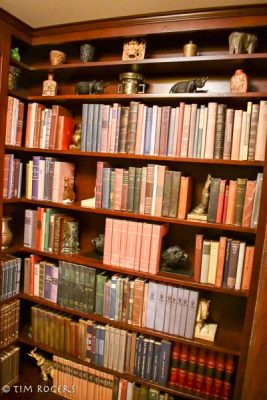 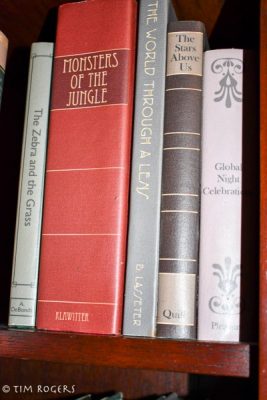 For example, there is a little library area in which all of the books are tied to various Disney attractions and movies (you can see here “The Stars Above Us” by Quill, which I’m pretty sure is supposed to be Peter Quill, or Starlord from Guardians of the Galaxy). 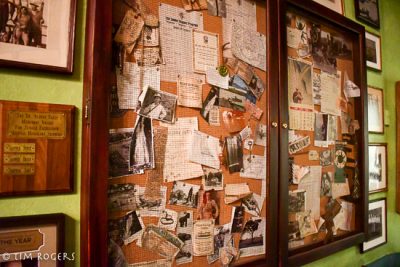 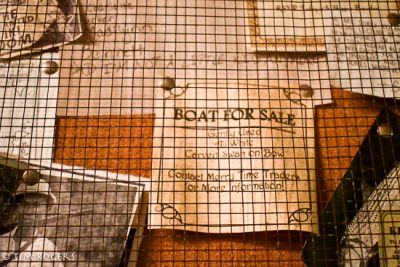 Skipper Canteen also features a posting board that contains things like a notice about a lecture from a Dr. Jones that is being postponed because he got lost in a temple, and a for sale notice for something that sounds remarkably like the Swan Boats from the former Magic Kingdom attraction. 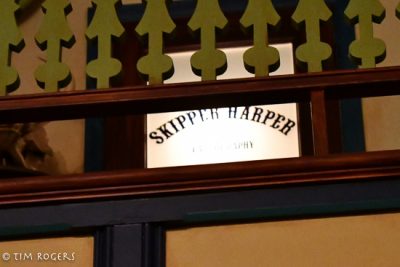 Harper Goff was an artist and Imagineer who was said to have drawn the route for the Jungle Cruise with a stick in the ground, thus “Cartography” 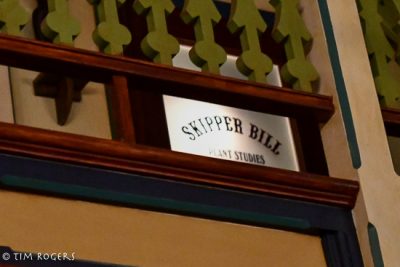 Bill Evans was Walt Disney’s personal landscaper, and was hired to create the horticulture for all of Disneyland.

Several of the other touches pay direct homage to the Jungle Cruise itself, from the office doors above the room paying tribute to the original Imagineers and their role in the attraction, to some of the wood from the dock being repurposed for the restaurant. Disney themeing is always known to be thorough, but for this restaurant, that themeing ties directly into the history of the parks and one of the most beloved attractions. For that alone, I think Disney fans should definitely make their way here.

But back to the food of Skipper Canteen. In short, it was quite good. For my meal, I got the “Falls Family Falafel” and the “Lost and Found Soup” which are both actually appetizers. The soup for the day we went was a Coconut Curry Butternut Squash and was delicious and flavorful. 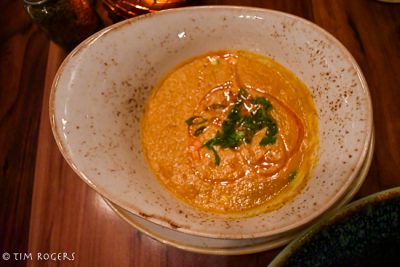 The Falafel was some of the best I’ve had in a long time – it was flavorful, spicy, and filling. I would definitely have either of these again. 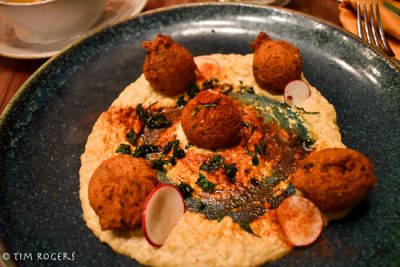 My wife got the “Perkins Thai Noodles” which is listed as “Chicken, Tofu, Seasonal Vegetables, and Rice Noodles tossed in a Spicy Soy-Chili Garlic Sauce. A favorite of our friend Pamelia Perkins, President of the former Pleasure Island stop, the Adventurers Club. For us, the ability to get this without the Chicken was great, and she really enjoyed it. (Also, notice the Adventurers Club reference). 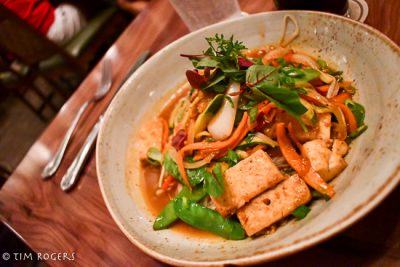 While I can’t speak to these personally, our friends tried the S.E.A. Shu Mai (pork shrimp and edamame wrapped and steamed), the Orinoco Ida’s Cachapas (corn pancakes, pork, and black beans, which we also could have gotten without the pork), and the Whole Fried Fish.

All of these were great and as a whole the meal was wonderful. 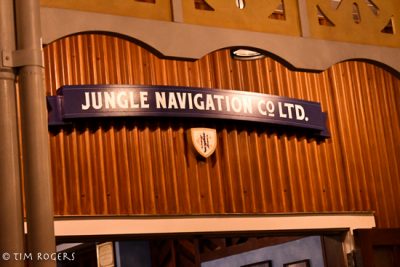 At times the Magic Kingdom gets a bad reputation for dining options, and after finally being able to try Skipper Canteen, I can say that it is a very welcome addition to the park. I will definitely be going back and hope to see you there!