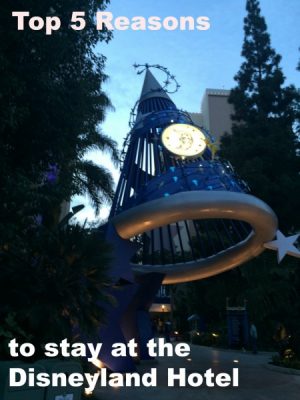 The entrance to the Disneyland Hotel from Downtown Disney

Picking an onsite hotel at Disneyland is not quite as nerve racking as doing the same thing at Walt Disney World. After all, Disneyland only boasts three onsite hotels. Still, there are good reasons to stay at each of Disneyland’s resorts. Here are my top five reasons to choose the Disneyland Hotel. 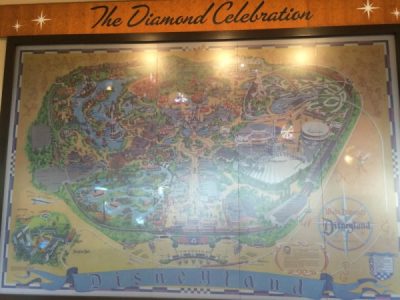 Vintage map of Disneyland in the lobby

When Walt Disney began to plan Disneyland, he wanted a hotel where guests who visited the Happiest Place on Earth could stay. Alas, it wasn’t in the budget, so he turned to Jack Wrather and allowed him to build a hotel bearing the Disneyland name close to the park’s gates. The Hotel opened in 1955. It wasn’t until 1988 that Disney finally bought the hotel. It’s been through a few renovations since then, but the theme of the hotel is its own history – classic Disneyland.

A large map of the park from it’s early days, with animated features is one of the first things you see if you enter through the front of the hotel. I could gaze at it for hours.

It is not uncommon to run into Disney characters in the lobby of the Fantasy Tower. While there are long lines to meet these guys in the parks, it’s a very pleasant experience to simply walk on up to Goofy in the lobby to get your photo taken. The encounters here tend to be quite casual. Once, I witnessed a woman watching cartoons in the waiting area while the rest of her family was in the check in line. She was sitting in a large armchair. Goofy casually walked up and sat next to her on the arm of the chair, his legs crossed, his chin in his hands, as if he were watching, too. The woman didn’t even notice. Of course, everyone around her laughed and eventually she looked up in surprise to see him sitting there! 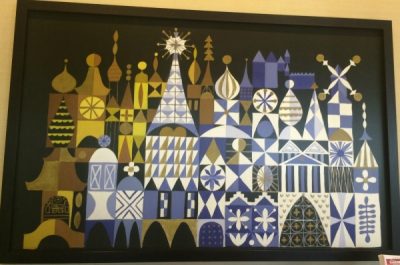 it’s a small world artwork in the Fantasy Tower lobby

Rooms at the Disneyland Hotel are located in three towers: the Fantasy Tower, the Frontier Tower, and the Adventure Tower. Although the rooms are decorated the same, the common areas, and the music playing, are themed to the area they represent.

In the Fantasy Tower, you will found it’s a small world inspired artwork and tea cup seats in the lobby. In the Frontier Tower there’s a miniature model of Big Thunder Mountain Railroad. In the Adventure Tower you’ll find maquettes of animals from the Jungle Cruise.

The Disneyland Hotel features three pools: the D-Ticket Pool, the E-Ticket Pool, and the very popular Monorail Pool which features not one, but two monorail slides. Even if you’re not a slider, it is super fun to watch your family members whoop and holler their way down. Smaller toddler appropriate slides in a shallow splash zone are also located here, as well as a hot tub. 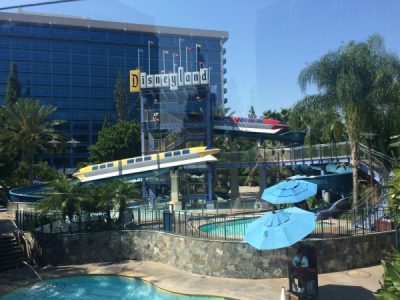 The Monorail slides at the pool

The Disneyland Hotel hosts some great food. Goofy’s Kitchen is a very popular character restaurant where I’ve celebrated many family birthdays. Steakhouse 55 is an upscale restaurant that is famed for its dinner but is often overlooked for its breakfasts. Tangaroa Terrace is a quick and casual Tiki themed restaurant with indoor and outdoor seating. The Coffee House is perfect for grabbing a quick and portable breakfast on your way to the parks. 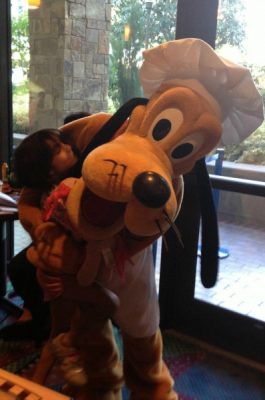 And if you’d like some liquid refreshment, the insanely popular Trader Sam’s Enchanted Tiki Bar is here. Inside, the Cast Members keep the atmosphere jovial and lively. Outdoors, music plays on the patio. (It’s family friendly until 8:00 p.m. After that, it’s adults only)

Have you stayed at the Disneyland Hotel? What was your favorite part? Share in the comments.