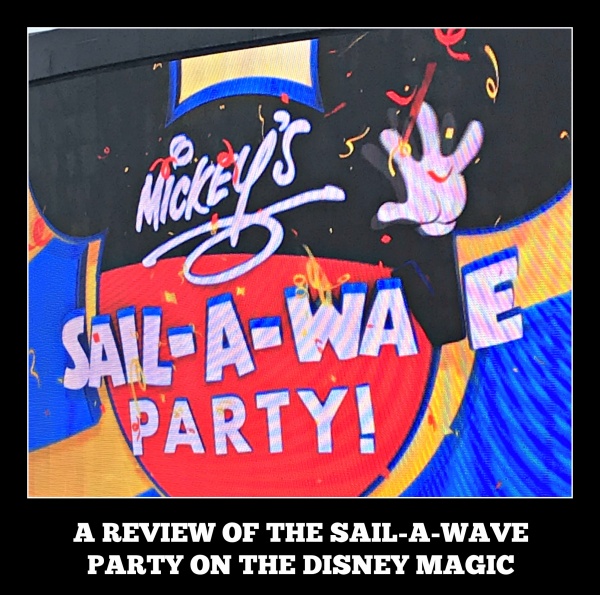 My family just recently returned from a Marvel Day at Sea cruise on the Disney Magic.  There is a kickoff celebration that begins every cruise with Disney Cruise Line and we were lucky enough to be on the very first sailing with the new Mickey’s Sail-A-Wave party on the Disney Magic which took place on February 22, 2019.  This show previously debuted on the Disney Wonder earlier in the month.

The first thing that you will notice when heading out to the party are the inflatable Mickey gloves lined around the sides of deck 10.  There is also a giant inflatable glove on the stage at the DJ stand on deck 9.  The Oceaneers Club had a glove craft during open house so that you could make your own gloves to wave.  We did not participate in that activity because we got a glove when we went to the Port Adventure desk to get tickets for a meet and greet. 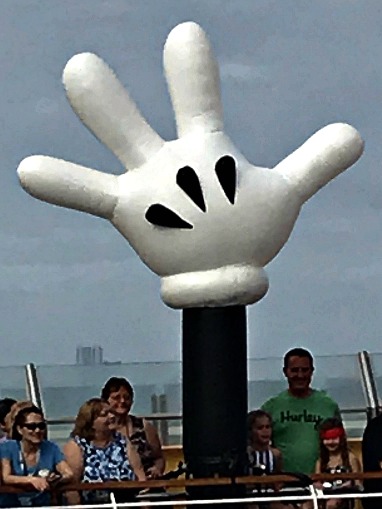 There were a couple of places down on deck 9 that were roped off as a kid zone around the pool. You can not go in these areas unless you are a child. No adults allowed, not even parents!   Now you may be thinking why would they put the kids around the pool, but it’s not really a pool at that time. They cover it up to make it a runway.

Runway? What? Yes, that is correct. The Cast Members picked some families to walk the runway like they were in a fashion show.  Each family was brought out to the runway to walk down to the end where a camera was filming them for the big screen. When they got to the end, they turned around and headed back so the next family could come out. And of course they needed to give their best waves.

One of the features of the new party is Disney Bounding.  That is when you are dressed in the colors or style of your favorite character without actually wearing the costume of that character.  Some of the entertainment staff came out next wearing outfits that were inspired by the Fab 5. Then Goofy, Pluto, Donald, Minnie, and Mickey came out to the runway turned dance floor to get the party started.

As we were pulling away from the port, we were encouraged to wave our gloves to everyone on shore watching the ship head out to sea.  We made sure to be on deck 10, port side of the ship where the Port of Miami webcam is located. My daughter waved her glove and our friends were actually able to see us. They said that the webcam actually zoomed in on our family which was pretty cool. 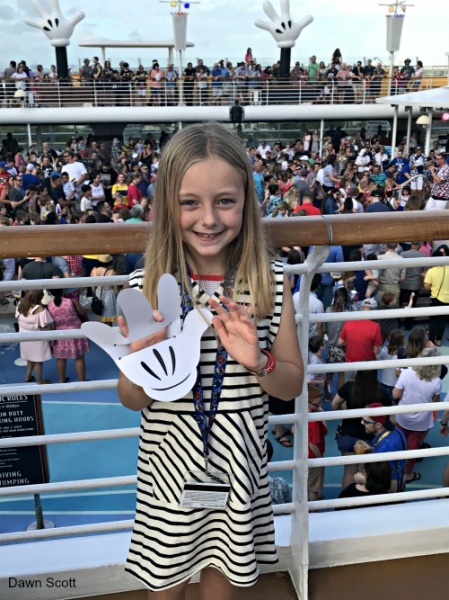 So now that I have explained Mickey’s Sail-A-Wave Party, let me tell you my thoughts.  I was very disappointed! The music was good and the dancing was fine but…the characters were not in their cruising attire.  We LOVE their sailor outfits that they wore in the previous show! I couldn’t believe it when they came out without them. I am guessing this had to do with the Disney Bounding aspect of the show.

What did we like about Mickey’s Sail-A-Wave Party?  We thought the inflatable gloves were cute.  And though we didn’t take advantage of it, we liked that they had a roped off section in the beginning of the party for the kids so that they could have the front row view of the runway. Also, the selection of music was a fun mix for many different tastes.

Even though it was really cool to get the debut showing, we really missed the old parties.

Have you been to the new Mickey’s Sail-A-Wave party? Did you enjoy it? Would you miss the characters in their sailor suits? Share your thoughts in the comments below or on Facebook or Twitter!

Want to sail on a Disney Cruise? Contact The Magic for Less Travel for more information and a free, no-obligation quote.