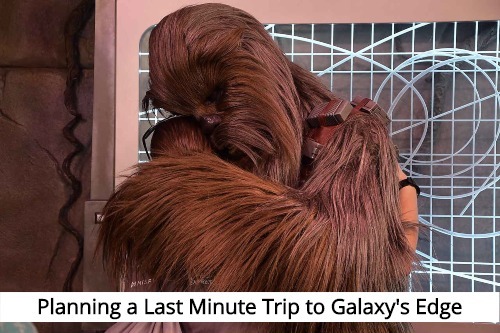 Star Wars: Galaxy’s Edge at Walt Disney World – to go or not to go, it wasn’t even a question.  As someone who remembers watching the original trilogy on VHS tapes growing up (I’m not old enough to have seen them originally in theaters), read every Star Wars book I could get my hands on, who has been to opening night for every Disney made Star Wars movie, done every character meet-and-greet available at Disney’s Hollywood Studios, and is a legacy runner for runDisney’s Star Wars Darkside/Rival Run Half Marathon, I can officially say that visiting Walt Disney World’s Galaxy’s Edge is a must do for me – ASAP.  It was just a matter of when I would be able to sneak down to see this new land that is the dream for every Star Wars fan.

As an Annual Passholder and an educator who lives in Ohio, I thought my one and only chance to see Galaxy’s Edge before a scheduled trip over Christmas break would be to sneak down for a long weekend at the beginning of August – during what I hoped would be Annual Passholder preview days.  Unfortunately, I didn’t get a spot in the Annual Passholder Preview event. So I thought I was doomed to wait until December.  I may have even shed a few tears as I cancelled my room reservation for August and my flight (shout out to Southwest Airlines for their No Change Fees policy which lets you cancel and use what you paid on a later flight).

But All is not Lost

But then in a moment of clarity, I realized that I had a three day weekend for Labor Day.  It would be a short trip, but in an attempt to not get my hopes up, I figured that affordable rooms were probably sold out.  And flights were probably going to be outrageous.

To my amazement, rooms were still easy to come by and using an Annual Passholder room offer, I was able to stay at an All-Star Resort for less than $100 a night.  Truthfully, I could have had my pick of almost any resort on property, but since all my room will be for is sleeping, a value resort will work just fine.  Flights were also very affordable. I was able to use my credit from my cancelled August flight, and paid less than what I did in August.  Overall, it was about what I normally pay for a round trip ticket to Orlando, which is shocking considering it is a holiday weekend and on short notice.

I quickly booked everything and went onto the next item on a Disney trip planner’s list – FastPasses.  I booked FastPasses for Hollywood Studios for every day of my trip, knowing that is where I want to be and I can always change my plans and go elsewhere (EPCOT’s Food and Wine Festival, or Magic Kingdom for Halloween decorations or even the Halloween Party).  To my shock,  booking at just over 30 days out, the only ride that was unavailable for a FastPass was Slinky Dog Dash.  Every other ride had availability at some point during each of the three days that I will be there.

Just go and Have Fun

My lesson and advice in all of this is if you want to see Galaxy’s Edge at Walt Disney World, find some days when you can make the trip and just check prices.  With all the discounts that Disney has released right now, you may find that there are rooms that are affordable.  Then book and go have an experience you may never forget.

As I count down the days until I get to live out my dream of piloting the Millennium Falcon, I know that people will say “But the lines will be long”… and they probably will be.  And there are a lot of things that we don’t know, like how they will get people into the land?  Will it be like Disneyland or some new method that no one knows yet?  But I do know that the moment I walk in and see the Millennium Falcon docked on Batuu, I’ll know that I’m finally… home.

Have you considered making at last minute trip to see Star Wars: Galaxy’s Edge? Or are you steering away from Batuu for the foreseeable future? Let us know your thoughts in the comments, or on Facebook or Twitter!