Make Mine Music was released on April 20, 1946 as the eighth full-length animated feature in Disney history and the third in a string of six consecutive package films produced by the studio. The package films incorporated numerous short segments based around a common theme, in this case music, instead of a single plot-based story.

The flick utilizes 10 musical animated shorts: “The Martins and the Coys,” “Blue Bayou,” “All the Cats Join In,” “Without You,” “Casey at the Bat,” “Two Silhouettes,” “Peter and the Wolf,” “After You’ve Gone,” “Johnnie Fedora and Alice Bluebonnet,” and “The Whale Who Wanted to Sing at the Met.” Because of “comic gunplay” that was deemed unsuitable for children, Disney cut “The Martins and the Coys” from its 2000 Gold Edition DVD release of Make Mine Music. “Blue Bayou” immediately follows the opening credits on that DVD.

A variety of music styles, including love, Benny Goodman swing, ballet, and opera, are incorporated in Make Mine Music. The purpose of the music differs among the shorts. In some of the segments, such as “Blue Bayou” and “All the Cats Join In,” the music is the primary focus with the visuals essentially following suit; these segments contain no real story. In “Blue Bayou,” birds beautifully move to the tune of peaceful vocal music. In “All the Cats Join In,” various human characters, not cats, “go with the flow” of the swing music, basically reacting on impulse to keep the segment moving. The elemental synchronization of these shorts is artful.

Other portions, including “Casey at the Bat,” “Johnnie Fedora and Alice Bluebonnet,” and “The Whale Who Wanted to Sing at the Met,” feature more developed plots with music helping aid their respective stories. In the latter short, Willie the Whale has a dream of performing at the Metropolitan Opera House and sings numerous songs to showcase his talent.

“Peter and the Wolf” possesses a strong plot but is also music-driven with different instruments representing different characters. For example, scenes involving Peter, the title child, are accompanied by a string quartet, while segments featuring Ivan the cat are accompanied by clarinet tunes. I have mixed feelings regarding the execution of this short. The use of the instruments is clever and noticeable, but I thought the narration by Sterling Holloway distracted from the music at times. Holloway is a classic Disney narrator, and he added some humor, but I think this short would have been better served by allowing the instrumentation to speak for itself.

The animation style and quality varies widely amongst the shorts. Some segments are beautifully animated, while others are uninspired in this regard.

I found the animation of “Blue Bayou” and “Without You,” respectively, to be nostalgia inducing with gorgeous images of night skies. The rainy night in “Without You” perfectly complements the short’s somber love song.

Conversely, I thought “All the Cats Join In” was poorly animated. With generic characters and sketchy backgrounds, this short didn’t scream “Disney” to me.

Finally, “Two Silhouettes” and “After You’ve Gone” utilize visually-appealing abstract animation. “After You’ve Gone” showcases dancing instruments and semi-bodies against colorful backdrops, including a boxing ring. Who you got; the woodwind or the string?

“Casey at the Bat” is potentially hilarious for baseball fans. Aspects of normal happenings on the diamond, including base running and sign calling, are afforded some whimsical touches. You may decide to grow a long beard after watching this short because…you’re safe!

Sterling Holloway’s narration adds some sarcasm to “Peter and the Wolf.”

Finally, in “The Whale Who Wanted to Sing at the Met,” we encounter argumentative academics and seemingly-hypnotized harpoonists.

The most suspenseful portion of Make Mine Music occurs toward the end of “Casey at the Bat.” Here, Casey faces a 0-2 count with both his perfect batting average and the game on the line. A hit will make Casey a bigger hero than he already is; an out will transform him into a proverbial goat. The tension is enhanced by loud and rapid narration coupled with slow pitch delivery. 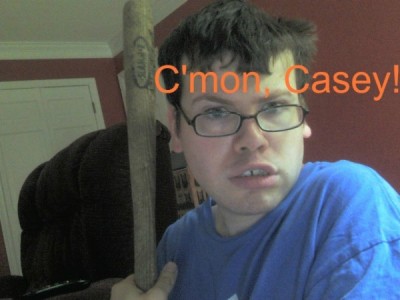 “Peter and the Wolf” is suspenseful because of the wolf. Can the various characters survive the wolf’s wrath?

Finally, in “Johnnie Fedora and Alice Bluebonnet,” the two lovers from the department store window are separated after being purchased by different people. Will the hats reunite and live happily ever after?

Because of its music focus, Make Mine Music is comparable in scope, not scale, to Fantasia (1940).

The 2013 Pixar short “The Blue Umbrella” is similar to “Johnnie Fedora and Alice Bluebonnet” in that inanimate objects fall in love before enduring separation.

Holloway is one of the most notable voice actors in Disney history. In addition to narrating such shorts as “Susie the Little Blue Coupe (1952)” and “Lambert the Sheepish Lion (1952),” Holloway voiced the Stork in Dumbo (1941), Cheshire Cat in Alice in Wonderland (1951), Kaa the snake in The Jungle Book (1967), Roquefort the Mouse in The Aristocats, and Pooh in The Many Adventures of Winnie the Pooh (1977).

Also at the Magic Kingdom in Fantasyland, you can find a poster of Willie the Whale performing in the queue while waiting at “Mickey’s PhilharMagic.”  The attraction is a 3D show, featuring Donald Duck causing mischief while you are transported to different Disney movies along the way, told through song.

The shorts in Make Mine Music are inconsistent in quality, but they’re fun, and the music is diverse and excellent.

What do you think of Make Mine Music? Let me know in a comment!

Sponsored Ad:  Would you like to help support The Mouse For Less website in continuing their mission of being THE Disney vacation planning resource?  You can do so by purchasing Make Mine Music from our Affiliate Link through Amazon. Thanks so much for your support!